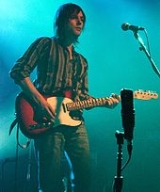 Encyclopedia
Bobby Kildea is a musician from Northern Ireland
Northern Ireland
Northern Ireland is one of the four countries of the United Kingdom. Situated in the north-east of the island of Ireland, it shares a border with the Republic of Ireland to the south and west...
. He currently plays bass
Bass guitar
The bass guitar is a stringed instrument played primarily with the fingers or thumb , or by using a pick....
and guitar
Guitar
The guitar is a plucked string instrument, usually played with fingers or a pick. The guitar consists of a body with a rigid neck to which the strings, generally six in number, are attached. Guitars are traditionally constructed of various woods and strung with animal gut or, more recently, with...
in the Scottish
Scotland
Scotland is a country that is part of the United Kingdom. Occupying the northern third of the island of Great Britain, it shares a border with England to the south and is bounded by the North Sea to the east, the Atlantic Ocean to the north and west, and the North Channel and Irish Sea to the...
indie pop band Belle & Sebastian
Belle & Sebastian
Belle and Sebastian are an indie pop band formed in Glasgow in January 1996. Belle and Sebastian are often compared with influential indie bands such as The Smiths, as well as classic acts such as Love, Bob Dylan and Nick Drake. The name Belle & Sebastian comes from Belle et Sébastien, a 1965...
, after joining in 2001 to replace departing bassist Stuart David
Stuart David
Stuart David is a Scottish musician, who formerly was a bassist with Belle & Sebastian and then went on to front Looper . He is the author of the novels Nalda Said and The Peacock Manifesto published by I.M.P. Fiction in 1999 and 2001...
, and had previously been in V-Twin. He is the band's only Northern Irish member and is notable for his laidback demeanor and long hair.

In December 2008, he toured with The Vaselines
The Vaselines
The Vaselines are an alternative rock band from Glasgow, Scotland. Formed in 1986, the band was originally a duo between its songwriters Eugene Kelly and Frances McKee, but later added James Seenan and Eugene's brother Charlie Kelly on bass and drums respectively from the band Secession. McKee had...
during Belle & Sebastian's hiatus, during which Stuart Murdoch
Stuart Murdoch (musician)
Stuart Lee Murdoch is a Scottish musician, and the lead singer and songwriter for the indie pop band Belle & Sebastian. The majority of his childhood was spent a stone's throw from the birthplace of Robert Burns in Alloway, Ayr until he left school and attended university in...
was heading his God Help the Girl
God Help The Girl
God Help the Girl is a musical project authored by Stuart Murdoch, leader of the Scottish indie pop group Belle & Sebastian, featuring a group of female vocalists, including Catherine Ireton, with Belle & Sebastian as the accompanying band...
project.
The source of this article is wikipedia, the free encyclopedia.  The text of this article is licensed under the GFDL.