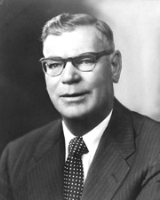 Bartlett was born in Seattle, Washington. After graduating from the University of Alaska
University of Alaska Fairbanks
The University of Alaska Fairbanks, located in Fairbanks, Alaska, USA, is the flagship campus of the University of Alaska System, and is abbreviated as Alaska or UAF....
in 1925, Bartlett began his career in politics. A reporter for the Fairbanks Daily News until 1933, he accepted the position of secretary to Delegate Anthony Dimond
Anthony Dimond
Anthony Joseph Dimond was an American Democratic Party politician who was the Alaska Territory Delegate in the United States House of Representatives for many years...
of Alaska
Alaska
Alaska is the largest state in the United States by area. It is situated in the northwest extremity of the North American continent, with Canada to the east, the Arctic Ocean to the north, and the Pacific Ocean to the west and south, with Russia further west across the Bering Strait...
. Three years later he became the chairman of the Unemployment Compensation Commission of Alaska.

On January 30, 1939, President Franklin D. Roosevelt appointed him secretary of the Alaska Territory
Alaska Territory
The Territory of Alaska was an organized incorporated territory of the United States that existed from August 24, 1912, until January 3, 1959, when it was admitted to the Union as the State of Alaska...
. Beginning in 1945, Bartlett served as the delegate from Alaska to the 79th and the six succeeding Congresses. Continuing his civic service, he was president of the Alaska Tuberculosis Association and served as a member of the Alaska War Council. He labored constantly for statehood; upon Alaska's admission to the Union in 1959 he became the first senator from Alaska and served until 1968.

Bartlett possessed the reputation of a quiet man of achievement. The Library of Congress
Library of Congress
The Library of Congress is the research library of the United States Congress, de facto national library of the United States, and the oldest federal cultural institution in the United States. Located in three buildings in Washington, D.C., it is the largest library in the world by shelf space and...
estimates that he had more bills passed into law than any other member in congressional history. Even before statehood he was writing legislation (sponsored by other congressional representatives), such as the Alaska Mental Health Enabling Act
Alaska Mental Health Enabling Act
The Alaska Mental Health Enabling Act of 1956 was an Act of Congress passed to improve mental health care in the United States territory of Alaska. It became the focus of a major political controversy after opponents nicknamed it the "Siberia Bill" and denounced it as being part of a communist...
of 1956. Some of his bills included the Radiation Safety Bill and the Bartlett Act, requiring all federally funded buildings to be accessible to the handicapped.

Bartlett died following heart surgery on December 11, 1968 at Cleveland Clinic Hospital in Cleveland, Ohio
Ohio
Ohio is a Midwestern state in the United States. The 34th largest state by area in the U.S.,it is the 7th‑most populous with over 11.5 million residents, containing several major American cities and seven metropolitan areas with populations of 500,000 or more.The state's capital is Columbus...
. Ted Stevens
Ted Stevens
Theodore Fulton "Ted" Stevens, Sr. was a United States Senator from Alaska, serving from December 24, 1968, until January 3, 2009, and thus the longest-serving Republican senator in history...
was appointed to replace him on December 24, 1968.