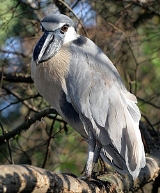 For other uses of the word, see Boatbill (disambiguation).

The Boat-billed Heron (Cochlearius cochlearius) - colloquially known as the Boatbill - is an atypical member of the heron
Heron
The herons are long-legged freshwater and coastal birds in the family Ardeidae. There are 64 recognised species in this family. Some are called "egrets" or "bitterns" instead of "heron"....
family, and was formerly thought to be in a monotypic
Monotypic
In biology, a monotypic taxon is a taxonomic group with only one biological type. The term's usage differs slightly between botany and zoology. The term monotypic has a separate use in conservation biology, monotypic habitat, regarding species habitat conversion eliminating biodiversity and...
family, Cochlearidae.

The Boatbilled Heron is about 54 cm long. The adult has a black crown, long crest and upper back. The face, throat and breast are white, and the lower underparts are rufous with black flanks. The wings and lower back are pale grey. The massive broad scoop-like bill, which gives rise to this species' name, is mainly black. Immature birds have mainly brown upperparts and brown-tinged whitish underparts, and lack the crest.

This species feeds on fish,mice,water snakes,eggs, crustaceans, insects and small amphibians. Its calls include a deep croak and a high-pitched pee-pee-pee.