Blutenburg Castle is an old ducal country seat in the west of Munich
Munich
Munich The city's motto is "" . Before 2006, it was "Weltstadt mit Herz" . Its native name, , is derived from the Old High German Munichen, meaning "by the monks' place". The city's name derives from the monks of the Benedictine order who founded the city; hence the monk depicted on the city's coat...
, Germany
Germany
Germany , officially the Federal Republic of Germany , is a federal parliamentary republic in Europe. The country consists of 16 states while the capital and largest city is Berlin. Germany covers an area of 357,021 km2 and has a largely temperate seasonal climate...
, on the banks of river Würm
Würm
The Würm is a river in Bavaria, Germany, right tributary of the Amper. It drains the overflow from Lake Starnberg and flows swiftly through the villages of Gauting, Krailling, Planegg, Gräfelfing and Lochham as well as part of Munich before joining, near Dachau, the Amper, which soon afterwards...
. 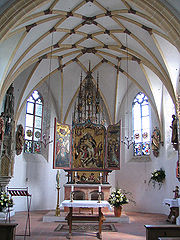 He also ordered the construction of the palace chapel, a splendid masterpiece of late Gothic
Gothic architecture
Gothic architecture is a style of architecture that flourished during the high and late medieval period. It evolved from Romanesque architecture and was succeeded by Renaissance architecture....
style which still has its stained-glass windows, along with the altars with three paintings created in 1491 by Jan Polack
Jan Polack
Jan Polack Johannes Polack , was a 15th-century painter....
. The main building became derelict during the Thirty Years War, but was rebuilt in 1680–81. The castle is still surrounded by a ring wall with four towers.