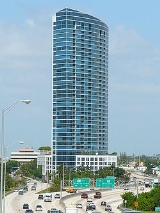 Encyclopedia
Blue on the Bay is a skyscraper
Skyscraper
A skyscraper is a tall, continuously habitable building of many stories, often designed for office and commercial use. There is no official definition or height above which a building may be classified as a skyscraper...
in the City of Miami, Florida
Florida
Florida is a state in the southeastern United States, located on the nation's Atlantic and Gulf coasts. It is bordered to the west by the Gulf of Mexico, to the north by Alabama and Georgia and to the east by the Atlantic Ocean. With a population of 18,801,310 as measured by the 2010 census, it...
, United States
United States
The United States of America is a federal constitutional republic comprising fifty states and a federal district...
. It is located in the northern part of the city, near Midtown Miami
Midtown Miami
Midtown Miami is the collective term for the Wynwood and Edgewater neighborhoods of Miami, Florida, United States, north of Downtown and south of the Miami Design District. It is roughly bound by North 29th Street to the south, I-195 to the north, I-95 to the west and Biscayne Bay to the east.In...
, in the Edgewater
Edgewater, Miami, Florida
Edgewater is a neighborhood in Miami, Florida, United States, located north of Downtown and Omni, and south of the Upper East Side. It roughly bound by North 17th Street to the south, North 37th Street to the north, the Florida East Coast Railway and East First Avenue to the west and Biscayne Bay...
neighborhood. Completed in 2005, it was part of the recent building boom in Miami. It is 425 feet (129.5 m) tall, and contains 37 floors. Floors 1-3 are used for retail, and floors 4-36 are used for residential units. The 37th floor contains an observation deck and resident facilities. The building is located between Northeast 36th Street and Interstate-195
Interstate 195 (Florida)
Interstate 195 is a spur expressway connecting Interstate 95 in the west with Miami Beach in the east, crossing Biscayne Bay by traveling over the Julia Tuttle Causeway, named after Miami founder Julia Tuttle....
at Northeast 5th Avenue.