Operation Hurricane was the test of the first British atomic device
Nuclear weapons and the United Kingdom
The United Kingdom was the third country to test an independently developed nuclear weapon, in October 1952. It is one of the five "Nuclear Weapons States" under the Nuclear Non-Proliferation Treaty, which the UK ratified in 1968...
on 3 October 1952. A plutonium
Plutonium
Plutonium is a transuranic radioactive chemical element with the chemical symbol Pu and atomic number 94. It is an actinide metal of silvery-gray appearance that tarnishes when exposed to air, forming a dull coating when oxidized. The element normally exhibits six allotropes and four oxidation...
implosion device was detonated in the lagoon between the Montebello Islands
Montebello Islands
The Montebello Islands, also known as the Monte Bello Islands, are an archipelago of around 174 small islands lying north of Barrow Island and off the Pilbara coast of north-western Australia. Montebello is Italian for "beautiful mountain"...
, Western Australia
Western Australia
Western Australia is a state of Australia, occupying the entire western third of the Australian continent. It is bounded by the Indian Ocean to the north and west, the Great Australian Bight and Indian Ocean to the south, the Northern Territory to the north-east and South Australia to the south-east...
.

The weapon was a close copy of the Fat Man
Fat Man
"Fat Man" is the codename for the atomic bomb that was detonated over Nagasaki, Japan, by the United States on August 9, 1945. It was the second of the only two nuclear weapons to be used in warfare to date , and its detonation caused the third man-made nuclear explosion. The name also refers more...
(Nagasaki) weapon, although the design was modified to use a levitated pit
Pit (nuclear weapon)
The pit is the core of an implosion weapon – the fissile material and any neutron reflector or tamper bonded to it. Some weapons tested during the 1950s used pits made with U-235 alone, or in composite with plutonium, but all-plutonium pits are the smallest in diameter and have been the standard...
. This increased the power of the bomb, but was actually done as a safety measure
Nuclear safety
Nuclear safety covers the actions taken to prevent nuclear and radiation accidents or to limit their consequences. This covers nuclear power plants as well as all other nuclear facilities, the transportation of nuclear materials, and the use and storage of nuclear materials for medical, power,...
. There were concerns that without the gap between the tamper and the pit, a criticality accident
Criticality accident
A criticality accident, sometimes referred to as an excursion or a power excursion, is an accidental increase of nuclear chain reactions in a fissile material, such as enriched uranium or plutonium...
could occur. The bomb used plutonium produced mainly at Windscale (now Sellafield
Sellafield
Sellafield is a nuclear reprocessing site, close to the village of Seascale on the coast of the Irish Sea in Cumbria, England. The site is served by Sellafield railway station. Sellafield is an off-shoot from the original nuclear reactor site at Windscale which is currently undergoing...
) in Cumbria
Cumbria
Cumbria , is a non-metropolitan county in North West England. The county and Cumbria County Council, its local authority, came into existence in 1974 after the passage of the Local Government Act 1972. Cumbria's largest settlement and county town is Carlisle. It consists of six districts, and in...
with a low Pu-240 content since hurried production led to short irradiation times. However, Windscale could not quite meet the 1 August 1952 deadline for manufacturing the inner core and the device also used some Canadian
Canada
Canada is a North American country consisting of ten provinces and three territories. Located in the northern part of the continent, it extends from the Atlantic Ocean in the east to the Pacific Ocean in the west, and northward into the Arctic Ocean...
-supplied plutonium. 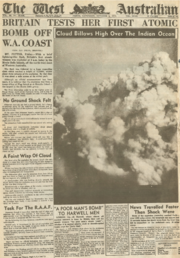