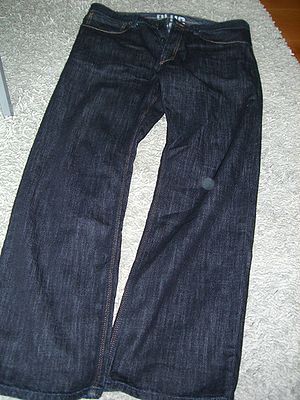 Blue Blood Denim is a Dutch
Netherlands
The Netherlands is a constituent country of the Kingdom of the Netherlands, located mainly in North-West Europe and with several islands in the Caribbean. Mainland Netherlands borders the North Sea to the north and west, Belgium to the south, and Germany to the east, and shares maritime borders...
designer jeans brand established in 2002 by Jason Denham and Steve te Pas. Steve te Pas is responsible for bringing Evisu
Evisu
Evisu or Evisu Genes is a Japanese designer clothing company that specializes in producing premium denim wear through traditional, labor-intensive methods....
jeans from Japan to Europe.

Its logo is a lobster, and its motto is "For Our Friends".