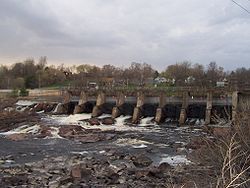 Black River Falls was founded to utilize the waterpower of the Black River
Black River (Wisconsin)
Black River is a river in west-central Wisconsin and tributary of the Mississippi River. The river is approximately 160 miles long. The river begins in central Wisconsin, rising in Taylor County at approximately west of the village of Rib Lake....
. As the area was predominantly forest at the time, its primary use was in operating sawmill
Sawmill
A sawmill is a facility where logs are cut into boards.-Sawmill process:A sawmill's basic operation is much like those of hundreds of years ago; a log enters on one end and dimensional lumber exits on the other end....
s. Some of the lumber produced was used in the construction of the Mormon
Mormon
The term Mormon most commonly denotes an adherent, practitioner, follower, or constituent of Mormonism, which is the largest branch of the Latter Day Saint movement in restorationist Christianity...
temple at Nauvoo, Illinois
Nauvoo, Illinois
Nauvoo is a small city in Hancock County, Illinois, United States. Although the population was just 1,063 at the 2000 census, and despite being difficult to reach due to its location in a remote corner of Illinois, Nauvoo attracts large numbers of visitors for its historic importance and its...
.

A large monument to Black River Falls' veterans of World War I
World War I
World War I , which was predominantly called the World War or the Great War from its occurrence until 1939, and the First World War or World War I thereafter, was a major war centred in Europe that began on 28 July 1914 and lasted until 11 November 1918...
, World War II
World War II
World War II, or the Second World War , was a global conflict lasting from 1939 to 1945, involving most of the world's nations—including all of the great powers—eventually forming two opposing military alliances: the Allies and the Axis...
, the Korean War
Korean War
The Korean War was a conventional war between South Korea, supported by the United Nations, and North Korea, supported by the People's Republic of China , with military material aid from the Soviet Union...
, and the Vietnam War
Vietnam War
The Vietnam War was a Cold War-era military conflict that occurred in Vietnam, Laos, and Cambodia from 1 November 1955 to the fall of Saigon on 30 April 1975. This war followed the First Indochina War and was fought between North Vietnam, supported by its communist allies, and the government of...
, as well as to local Medal of Honor
Medal of Honor
The Medal of Honor is the highest military decoration awarded by the United States government. It is bestowed by the President, in the name of Congress, upon members of the United States Armed Forces who distinguish themselves through "conspicuous gallantry and intrepidity at the risk of his or her...
recipient Mitchell Red Cloud, Jr.
Mitchell Red Cloud, Jr.
Mitchell Red Cloud, Jr. was a soldier in the United States Army during the Korean War...
, was erected near the Chamber of Commerce Building at 101 S. 2nd Street. Named the "Field of Honor", the attached plaques provide accounts of the veterans' services. This site is also the start of the four-mile (6.5 km) Foundation Trail, a signed hiking and bike path that circles the eastern part of the community.

The city is located on the falls of the Black River
Black River (Wisconsin)
Black River is a river in west-central Wisconsin and tributary of the Mississippi River. The river is approximately 160 miles long. The river begins in central Wisconsin, rising in Taylor County at approximately west of the village of Rib Lake....
at the northeast edge of the Driftless Area, where the river cuts through a region of granite. The falls are covered by a hydroelectric dam, forming the 200 acre (0.809372 km²) Black River Flowage.

As of the census
Census
A census is the procedure of systematically acquiring and recording information about the members of a given population. It is a regularly occurring and official count of a particular population. The term is used mostly in connection with national population and housing censuses; other common...
of 2000, there were 3,618 people, 1,563 households, and 886 families residing in the city. The population density
Population density
Population density is a measurement of population per unit area or unit volume. It is frequently applied to living organisms, and particularly to humans...
was 1,146.4 people per square mile (442.1/km²). There were 1,679 housing units at an average density of 532.0 per square mile (205.1/km²). The racial makeup of the city was 93.37% White, 0.19% African American, 4.73% Native American, 0.11% Asian, 0.08% Pacific Islander, 0.55% from other races
Race (United States Census)
Race and ethnicity in the United States Census, as defined by the Federal Office of Management and Budget and the United States Census Bureau, are self-identification data items in which residents choose the race or races with which they most closely identify, and indicate whether or not they are...
, and 0.97% from two or more races. Hispanic or Latino of any race were 1.16% of the population.

There were 1,563 households out of which 25.8% had children under the age of 18 living with them, 43.4% were married couples
Marriage
Marriage is a social union or legal contract between people that creates kinship. It is an institution in which interpersonal relationships, usually intimate and sexual, are acknowledged in a variety of ways, depending on the culture or subculture in which it is found...
living together, 10.2% had a female householder with no husband present, and 43.3% were non-families. 38.0% of all households were made up of individuals and 19.6% had someone living alone who was 65 years of age or older. The average household size was 2.15 and the average family size was 2.82.

The median income for a household in the city was $33,555, and the median income for a family was $46,222. Males had a median income of $31,481 versus $18,519 for females. The per capita income
Per capita income
Per capita income or income per person is a measure of mean income within an economic aggregate, such as a country or city. It is calculated by taking a measure of all sources of income in the aggregate and dividing it by the total population...
for the city was $21,532. About 3.7% of families and 7.7% of the population were below the poverty line, including 5.4% of those under age 18 and 10.4% of those age 65 or over.

While the logging and lumber industry is still present in the area, the current economy leans heavily on agriculture
Agriculture
Agriculture is the cultivation of animals, plants, fungi and other life forms for food, fiber, and other products used to sustain life. Agriculture was the key implement in the rise of sedentary human civilization, whereby farming of domesticated species created food surpluses that nurtured the...
and tourism
Tourism
Tourism is travel for recreational, leisure or business purposes. The World Tourism Organization defines tourists as people "traveling to and staying in places outside their usual environment for not more than one consecutive year for leisure, business and other purposes".Tourism has become a...
. Several locations support the tourism industry. Lake Arbutus, a 839 acres (3.4 km²) impoundment of the river, lies several miles northeast, as does the multi-use Levis/Trow trail system
Levis/Trow trail system
The Levis/Trow trail system is a 34-mile network of trails in Clark County, Wisconsin, United States, west of Neillsville, used for hiking, mountain biking, and cross-country skiing. It consists of two types of trails, doubletrack and singletrack. The doubletrack is groomed for cross-country...
. Black River Falls is home to a casino
Casino
In modern English, a casino is a facility which houses and accommodates certain types of gambling activities. Casinos are most commonly built near or combined with hotels, restaurants, retail shopping, cruise ships or other tourist attractions...
and hotel operated by the Ho-Chunk
Ho-Chunk
The Ho-Chunk, also known as Winnebago, are a tribe of Native Americans, native to what is now Wisconsin and Illinois. There are two federally recognized Ho-Chunk tribes, the Ho-Chunk Nation of Wisconsin and Winnebago Tribe of Nebraska....
Nation. Much of the surrounding land is part of the Black River State Forest

Despite its size, Black River Falls has two newspapers, both published weekly: the Banner-Journal and the Jackson County Chronicle.

WWIS Radio operates the only radio stations in Black River Falls: WWIS 1260AM and WWIS 99.7FM. The AM station operates only during daytime hours.

Black River Falls is the focus of Michael Lesy
Michael Lesy
Michael Lesy is a writer and professor of literary journalism at Hampshire College in Amherst, Massachusetts. His books, which combine historical photographs with his own writing, include Wisconsin Death Trip , Time Frames: The Meaning of Family Pictures , Bearing Witness: A Photographic Chronicle...
's book Wisconsin Death Trip
Wisconsin Death Trip
Wisconsin Death Trip is a non-fiction book by Michael Lesy, first published in 1973. It has been adapted into a film.The book is based on a collection of late 19th century photographs by Jackson County, Wisconsin photographer Charles Van Schaick, mostly in the city of Black River Falls, and local...
(1973), which used photographs and newspaper cuttings to highlight the harshness of life in the community during the late nineteenth century and the effects it had on the psychology of the inhabitants. The book was made into a film in 2000, which included images from the community as it appears today. However the claim that all the stories took place in and around Black River Falls is false. The majority of the stories origins are from all over the state of Wisconsin, not just this one town.

The Black River Falls area is home to a large population of the endangered Karner Blue
Karner Blue
The Karner Blue, Lycaeides melissa samuelis, is a small, blue butterfly found in small areas of New Jersey, the Great Lakes region, southern New Hampshire, and the Capital District region of New York. The butterfly, whose lifecycle depends on the wild blue lupine flower , is classified as an...
butterfly
Butterfly
A butterfly is a mainly day-flying insect of the order Lepidoptera, which includes the butterflies and moths. Like other holometabolous insects, the butterfly's life cycle consists of four parts: egg, larva, pupa and adult. Most species are diurnal. Butterflies have large, often brightly coloured...
. The city celebrates with the Karner Blue Butterfly Festival held annually on the second Saturday of July.