Bjarke Ingels studied architecture
Architecture
Architecture is both the process and product of planning, designing and construction. Architectural works, in the material form of buildings, are often perceived as cultural and political symbols and as works of art...
at the Royal Academy in Copenhagen and the Technica Superior de Arquitectura in Barcelona
Barcelona
Barcelona is the second largest city in Spain after Madrid, and the capital of Catalonia, with a population of 1,621,537 within its administrative limits on a land area of...
, receiving his diploma in 1999. As a third year student he set up his first practice and won his first competition. From 1998-2001 he worked for Office of Metropolitan Architecture and Rem Koolhaas
Rem Koolhaas
Remment Lucas Koolhaas is a Dutch architect, architectural theorist, urbanist and "Professor in Practice of Architecture and Urban Design" at the Graduate School of Design at Harvard University, USA. Koolhaas studied at the Netherlands Film and Television Academy in Amsterdam, at the Architectural...
in Rotterdam
Rotterdam
Rotterdam is the second-largest city in the Netherlands and one of the largest ports in the world. Starting as a dam on the Rotte river, Rotterdam has grown into a major international commercial centre...
. 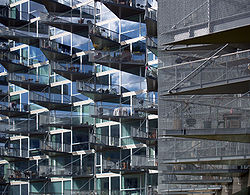 In 2001, Bjarke Ingels returned to Copenhagen to set up the architectural practice PLOT together with Belgian
Belgium
Belgium , officially the Kingdom of Belgium, is a federal state in Western Europe. It is a founding member of the European Union and hosts the EU's headquarters, and those of several other major international organisations such as NATO.Belgium is also a member of, or affiliated to, many...
OMA colleague Julien de Smedt
Julien De Smedt
Julien De Smedt is a Belgian-Danish architect based in Copenhagen, Denmark. In 2006 he founded the architectural practice Julien De Smedt Architects Julien De Smedt (born 3 December 1975 in Brussels) is a Belgian-Danish architect based in Copenhagen, Denmark. In 2006 he founded the architectural...
. The company rapidly achieved success, receiving significant national and international attention for their inventive designs. They were awarded a Golden Lion
Golden Lion
Il Leone d’Oro is the highest prize given to a film at the Venice Film Festival. The prize was introduced in 1949 by the organizing committee and is now regarded as one of the film industry's most distinguished prizes...
at the Venice Biennale of Architecture
Venice Biennale of architecture
Mostra di Architettura di Venezia, the Architecture section of the Venice Biennale, was established in 1980, although architecture had been a part of the art biennale since 1968....
in 2004 for a proposal for a new music house for Stavanger
Stavanger
Stavanger is a city and municipality in the county of Rogaland, Norway.Stavanger municipality has a population of 126,469. There are 197,852 people living in the Stavanger conurbation, making Stavanger the fourth largest city, but the third largest urban area, in Norway...
, Norway. Their first major achievement was the award-winning VM Houses in Ørestad
Ørestad
Ørestad is a developing city area in Copenhagen, Denmark, on the island of Amager. It is expected that 20,000 people will live in Ørestad, 20,000 will study, and 80,000 people will be employed in the area...
, Copenhagen, in 2005. Despite its success, PLOT was disbanded in January 2006 and Bjarke Ingels created Bjarke Ingels Group
Bjarke Ingels Group
Bjarke Ingels Group, often referred to as BIG, is an international architectural firm founded in 2005 by Bjarke Ingels in Copenhagen, Denmark. In 2010 it opened a branch office in New York City...
, BIG, while his former partner founded JDS / JULIEN DE SMEDT ARCHITECTS.

With BIG, Bjarke Ingels has continued the ideology from PLOT and has several major projects under construction or development both in Denmark and abroad. These include 8 House in Ørestad and the new Danish national Maritime museum in Elsinore, hotel projects in Norway, a highrise designed in the shape of the Chinese character
Chinese character
Chinese characters are logograms used in the writing of Chinese and Japanese , less frequently Korean , formerly Vietnamese , or other languages...
for 'people' for Shanghai
Shanghai
Shanghai is the largest city by population in China and the largest city proper in the world. It is one of the four province-level municipalities in the People's Republic of China, with a total population of over 23 million as of 2010...
, a masterplan for the redevelopment of a former naval base and oil industry wasteland into a zero-emission
Carbon offset
A carbon offset is a reduction in emissions of carbon dioxide or greenhouse gases made in order to compensate for or to offset an emission made elsewhere....
resort and entertainment city off the coast of Baku
Baku
Baku , sometimes spelled as Baki or Bakou, is the capital and largest city of Azerbaijan, as well as the largest city on the Caspian Sea and of the Caucasus region. It is located on the southern shore of the Absheron Peninsula, which projects into the Caspian Sea. The city consists of two principal...
, Azerbaijan
Azerbaijan
Azerbaijan , officially the Republic of Azerbaijan is the largest country in the Caucasus region of Eurasia. Located at the crossroads of Western Asia and Eastern Europe, it is bounded by the Caspian Sea to the east, Russia to the north, Georgia to the northwest, Armenia to the west, and Iran to...
, shaped as the seven mountains of the country, and a museum overlooking Mexico City
Mexico City
Mexico City is the Federal District , capital of Mexico and seat of the federal powers of the Mexican Union. It is a federal entity within Mexico which is not part of any one of the 31 Mexican states but belongs to the federation as a whole...
.

Under the BIG Banner Bjarke recently published "Yes is more - an archcomic on architectural evolution".