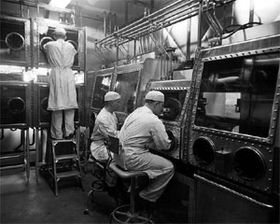 The concept of biocontainment, also called laboratory biosafety, pertains to microbiology
Microbiology
Microbiology is the study of microorganisms, which are defined as any microscopic organism that comprises either a single cell , cell clusters or no cell at all . This includes eukaryotes, such as fungi and protists, and prokaryotes...
laboratories in which the physical containment of highly pathogenic organisms (bacteria
Bacteria
Bacteria are a large domain of prokaryotic microorganisms. Typically a few micrometres in length, bacteria have a wide range of shapes, ranging from spheres to rods and spirals...
) or agents (virus
Virus
A virus is a small infectious agent that can replicate only inside the living cells of organisms. Viruses infect all types of organisms, from animals and plants to bacteria and archaea...
es) is required, usually by isolation in environmentally and biologically secure cabinets or rooms, to prevent accidental infection of workers or release into the surrounding community during scientific research. The term "biocontainment" was coined in 1985, but the concept stretches back at least to the 1940s.

Primary containment is the protection of personnel and the immediate laboratory environment from exposure to infectious agents and is provided by good microbiological technique and the use of appropriate safety equipment, such as biological safety cabinets. Secondary containment is the protection of the environment external to the laboratory from exposure to infectious materials and is provided by a combination of facility design and operational practices.

Biosafety suites are suites of laboratory rooms which are essentially equivalent to large Class III cabinets in which positive pressure personnel suits ("space suits") serve as the "outside" environment for workers. Examples include the biosafety suites at USAMRIID at Fort Detrick, Maryland and the Maximum Containment Facility (MCF) of the CDC
Centers for Disease Control and Prevention
The Centers for Disease Control and Prevention are a United States federal agency under the Department of Health and Human Services headquartered in Druid Hills, unincorporated DeKalb County, Georgia, in Greater Atlanta...
in Atlanta, Georgia
Atlanta, Georgia
Atlanta is the capital and most populous city in the U.S. state of Georgia. According to the 2010 census, Atlanta's population is 420,003. Atlanta is the cultural and economic center of the Atlanta metropolitan area, which is home to 5,268,860 people and is the ninth largest metropolitan area in...
.