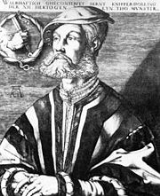 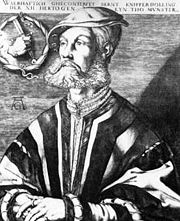 Bernhard Knipperdolling (c. 1495 – January 22, 1536) was a German leader of the Münster Anabaptist
Anabaptist
Anabaptists are Protestant Christians of the Radical Reformation of 16th-century Europe, and their direct descendants, particularly the Amish, Brethren, Hutterites, and Mennonites....
s. He was also known as Bernd or Berndt Knipperdollinck or Knypperdollynck; his birth name was van Stockem.

Born at the beginning of the sixteenth century in Münster
Münster
Münster is an independent city in North Rhine-Westphalia, Germany. It is located in the northern part of the state and is considered to be the cultural centre of the Westphalia region. It is also capital of the local government region Münsterland...
, Knipperdolling was the son of a wealthy, patrician cloth merchant
Cloth merchant
Cloth merchant is, strictly speaking, like a draper, the term for any vendor of cloth. However, it is generally used for one who owned and/or ran a cloth manufacturing and/or wholesale import and/or export business in the Middle Ages or 16th and 17th centuries...
. Little is known of his life as a young man. He first came into the public eye when he became a guild
Guild
A guild is an association of craftsmen in a particular trade. The earliest types of guild were formed as confraternities of workers. They were organized in a manner something between a trade union, a cartel, and a secret society...
leader in the city council. A follower of the preacher Bernhard Rothmann
Bernhard Rothmann
Bernhard Rothmann was a 16th century Reformer and an Anabaptist leader in the city of Münster . He was born in Stadtlohn around 1495.-Overview:...
, in 1528 he showed his colours as a "bold and proud" Protestant by suing the Catholic
Catholic
The word catholic comes from the Greek phrase , meaning "on the whole," "according to the whole" or "in general", and is a combination of the Greek words meaning "about" and meaning "whole"...
Münster town council and the Bishop Franz von Waldeck
Franz von Waldeck
Count Franz von Waldeck , was Prince-Bishop of Münster, Osnabrück, and Minden and a leading figure in putting down the Münster Rebellion....
at the Imperial Court of Justice. His position as guild leader meant he had the financial and political support of the guilds.

In January 1534, wandering Dutch
Netherlands
The Netherlands is a constituent country of the Kingdom of the Netherlands, located mainly in North-West Europe and with several islands in the Caribbean. Mainland Netherlands borders the North Sea to the north and west, Belgium to the south, and Germany to the east, and shares maritime borders...
Anabaptist preachers arrived in Münster proclaiming that a new prophet was on his way. They were soon followed by the "prophet" himself, the baker Jan Matthys
Jan Matthys
Jan Matthys was a charismatic Anabaptist leader, regarded by his followers as a prophet....
of Haarlem. Knipperdolling became a passionate believer.

On February 10, 1534, Knipperdolling joined the movement to overthrow the town council and bishop, along with Jan Matthys and Jan Bockelson
John of Leiden
John of Leiden , was an Anabaptist leader from the Dutch city of Leiden. He was the illegitimate son of a Dutch mayor, and a tailor's apprentice by trade.-Life:...
(or John of Leiden), one of Matthys' twelve disciples. He rallied the Anabaptists against conservative forces with "frenzied ecstasies". Accepted by the council, Knipperdolling won the elections of February 24, 1534, becoming Lord Mayor of Münster – this was the high point of the Anabaptist movement. His house became the centre of the Anabaptist movement; on January 15, 1534 the first believers' baptisms were performed there.

When Matthys made his demand for the execution of all "godless" citizens of Münster, Knipperdolling convinced him to allow people a week's time to be baptised, or leave the city. This avoided arousing international opposition against Münster and risking internal stability.

Knipperdolling organised military defenses against the Bishop's troops. He was also made chief executioner to the Twelve Judges; as chief executive he balanced out Bockelson, the Judges' spokesman. He was in charge of executions, "immigration officer", and the administrator of state property. Some of Matthys' policies went against Knipperdolling's best interests, such as the dissolution of the guilds and the confiscation of private property.

After Matthys' death on April 4, 1534, Knipperdolling supported the leadership of Jan Bockelson, who was crowned king, supported by poor non-Münsterite Anabaptists. Soon, however, he was claiming superiority to Bockelson and prophesying that "while Jan was king according to the flesh", he, Knipperdolling, was "called to be the spiritual king". This led to his brief imprisonment in 1535. On his release, Knipperdolling was named Stadholder (vice-king and governor) and executioner. His daughter Clara was married to Jan Bockelson after the introduction of polygamy
Polygamy
Polygamy is a marriage which includes more than two partners...
.

In 1535, Knipperdolling's position of power was however once again lost when Heinrich Krechting became the king's right hand man.

From June 24 - 25, 1535, the Bishop, with the aid of the deserter Henry Gresbeck, retook Münster. Knipperdolling, Bockelson and Bernhard Krechting were imprisoned and interrogated. In On January 22, 1536, Knipperdolling, Krechting, and Bockelson were publicly tortured and executed in Münster. Their corpses were suspended in a cage from the Lambertuskirche (St. Lambert's Church), which had been the initial focus of the Anabaptist revolution.

As the worldly leader of the Münster Anabaptists, Knipperdolling was "Steigbuegelhalter" (facilitator) and chief executive of the movement. Knipperdolling represented the local Münsterite basis of the revolution and his path shows their mode of adaptation to the siege situation and the rule of the Dutch Jans. He was also political and social level of Münster Reformation: city council vs. bishop, powerful merchants, and a powerful guild leader rejecting urban democracy in favour of religiously inspired government.