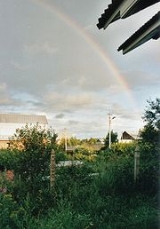 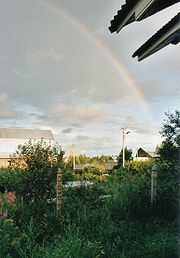 Beloostrov historically consists of two parts: Novy Beloostrov along the railway and Stary Beloostrov several kilometers to the north, mostly belonging to Vsevolozhsky District
Vsevolozhsky District
Vsevolozhsky District is a district of Leningrad Oblast, Russia, located in the southeastern part of the Karelian Isthmus. The area of the district is . Its administrative center is the town of Vsevolozhsk. District's population:...
of Leningrad Oblast
Leningrad Oblast
Leningrad Oblast is a federal subject of Russia . It was established on August 1, 1927, although it was not until 1946 that the oblast's borders had been mostly settled in their present position...
under the name Sadovodstva . Until the Winter War
Winter War
The Winter War was a military conflict between the Soviet Union and Finland. It began with a Soviet offensive on 30 November 1939 – three months after the start of World War II and the Soviet invasion of Poland – and ended on 13 March 1940 with the Moscow Peace Treaty...
Beloostrov had been the last railway station before the Russia–Finland
Finland
Finland , officially the Republic of Finland, is a Nordic country situated in the Fennoscandian region of Northern Europe. It is bordered by Sweden in the west, Norway in the north and Russia in the east, while Estonia lies to its south across the Gulf of Finland.Around 5.4 million people reside...
border.
The source of this article is wikipedia, the free encyclopedia.  The text of this article is licensed under the GFDL.