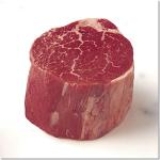 A common misconception is that the tenderloin is also called a Chateaubriand steak
Chateaubriand steak
Chateaubriand steak is a recipe of a particular thick cut from the tenderloin, which, according to Larousse Gastronomique, was created by personal chef, Montmireil, for François-René de Chateaubriand, the author and diplomat who served Napoleon as an ambassador and Louis XVIII as Secretary of State...
, when in fact, the Chateaubriand is a recipe for a particular tenderloin steak which originates from France
France
The French Republic , The French Republic , The French Republic , (commonly known as France , is a unitary semi-presidential republic in Western Europe with several overseas territories and islands located on other continents and in the Indian, Pacific, and Atlantic oceans. Metropolitan France...
. Typically, the Chateaubriand is taken from the center-cut of the tenderloin, in a large enough portion to feed two. There are three main "parts" of the tenderloin: the butt, the center-cut, and the tail. The butt end is usually suitable for carpaccio
Carpaccio
Carpaccio is a dish of raw meat or fish , thinly sliced or pounded thin and served as an appetizer.- History :...
, as the eye can be quite large; cutting a whole tenderloin into steaks of equal weight will yield proportionally very thin steaks from the butt end. The center-cut is suitable for portion-controlled steaks as the diameter of the eye remains relatively consistent. The center-cut can yield the traditional 'filet mignon
Filet mignon
Filet mignon is a steak cut of beef taken from the smaller end of the tenderloin, or psoas major of the beef carcass, usually a steer or heifer...
' or tenderloin steak, as well as the Chateaubriand and Beef Wellington
Beef Wellington
Beef Wellington is a preparation of fillet steak coated with pâté and duxelles, which is then wrapped in puff pastry and baked...
. The tail, which is generally unsuitable for steaks due to consistency of size concerns, can be used in recipes where small pieces of a tender cut are called for, such as Beef Stroganoff
Beef Stroganoff
Beef Stroganoff or Beef Stroganov is a Russian dish of sautéed pieces of beef served in a sauce with smetana or sour cream...
.

Whole tenderloins are sold as either "unpeeled" (meaning the fat and silver skin remain), "peeled" (meaning that the fat is removed, but silver skin remains), or as PSMOs ("pismos"), which is short for peeled, silver skin removed, and side muscle left on. While the most expensive option pound-for-pound, PSMOs offer considerable savings over other tenderloin options as they require little handling by the chef, since the fat and trimmings have already been removed. Trimming the silver skin from a tenderloin is a job best done by experts, as inexperienced meat cutters can damage the steaks, reducing either the yield or the visual presentation. Since it is the tenderest part of the animal, beef dishes requiring exceptionally tender meat, such as steak tartare
Steak tartare
Steak tartare is a meat dish made from finely chopped or minced raw beef. Tartare can also be made by thinly slicing a high grade of meat such as strip steak, marinating it in wine or other spirits, spicing it to taste, and then chilling it...
, are ideally made from the tenderloin.
The source of this article is wikipedia, the free encyclopedia.  The text of this article is licensed under the GFDL.