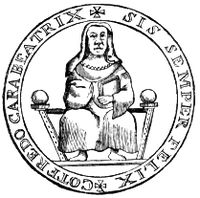 After her father died, she and her sister Sophie went to live with their mother's sister, Empress Gisela
Gisela of Swabia
Gisela of Swabia was the daughter of Herman II of Swabia and Gerberga of Burgundy. Both her parents were descendents of Charlemagne.-Life:...
.

With Boniface' death on 6 May 1052, Beatrice assumed the regency
Regent
A regent, from the Latin regens "one who reigns", is a person selected to act as head of state because the ruler is a minor, not present, or debilitated. Currently there are only two ruling Regencies in the world, sovereign Liechtenstein and the Malaysian constitutive state of Terengganu...
for her son Frederick. In 1054, to give her son the protection she could not militarily provide, she married Godfrey
Godfrey III, Duke of Lower Lorraine
Godfrey III , called the Bearded, was the eldest son of Gothelo I, duke of Upper and Lower Lorraine. By inheritance, he was count of Verdun and he became margrave of Antwerp as a vassal of the duke of Lower Lorraine...
, former duke of Lower Lorraine. However, in 1055, the Emperor Henry III arrested Beatrice for marrying a traitor. She was brought to Germany
Germany
Germany , officially the Federal Republic of Germany , is a federal parliamentary republic in Europe. The country consists of 16 states while the capital and largest city is Berlin. Germany covers an area of 357,021 km2 and has a largely temperate seasonal climate...
a prisoner while Frederick was summoned to Henry's court at Florence
Florence
Florence is the capital city of the Italian region of Tuscany and of the province of Florence. It is the most populous city in Tuscany, with approximately 370,000 inhabitants, expanding to over 1.5 million in the metropolitan area....
. He refused to go and died before any action was taken against him. The heir of Boniface was now his youngest daughter Matilda, who was imprisoned with her mother.

On the death of Henry, Godfrey was reconciled with his heir, Henry IV
Henry IV, Holy Roman Emperor
Henry IV was King of the Romans from 1056 and Holy Roman Emperor from 1084 until his forced abdication in 1105. He was the third emperor of the Salian dynasty and one of the most powerful and important figures of the 11th century...
, and exiled to Italy with his wife and stepdaughter. In January 1058, as a partisan of the newly-elected Pope Nicholas II
Pope Nicholas II
Pope Nicholas II , born Gérard de Bourgogne, Pope from 1059 to July 1061, was at the time of his election the Bishop of Florence.-Antipope Benedict X:...
, Leo de Benedicto had the gates of the Leonine City
Leonine City
The Leonine City is that part of the city of Rome around which the ninth-century Pope Leo IV commissioned the construction of the Leonine Wall. It is on the opposite side of the Tiber from the seven hills of Rome and was not enclosed within the ancient city's Aurelian Walls, built between 271 and...
thrown open for Godfrey and Beatrice. Godfrey immediately possessed the Tiber Island
Tiber Island
The Tiber Island , is a boat-shaped island which has long been associated with healing. It is an ait, and is one of the two islands in the Tiber river, which runs through Rome; the other one, much larger, is near the mouth. The island is located in the southern bend of the Tiber. It is...
and attacked the Lateran
Lateran
Lateran and Laterano are the shared names of several architectural projects throughout Rome. The properties were once owned by the Lateranus family of the former Roman Empire...
, forcing Benedict X to flee on January 24. Beatrice and Godfrey were allied with the reformers, including Hildebrand
Pope Gregory VII
Pope St. Gregory VII , born Hildebrand of Sovana , was Pope from April 22, 1073, until his death. One of the great reforming popes, he is perhaps best known for the part he played in the Investiture Controversy, his dispute with Henry IV, Holy Roman Emperor affirming the primacy of the papal...
and Pope Alexander II
Pope Alexander II
Pope Alexander II , born Anselmo da Baggio, was Pope from 1061 to 1073.He was born in Milan. As bishop of Lucca he had been an energetic coadjutor with Hildebrand of Sovana in endeavouring to suppress simony, and to enforce the celibacy of the clergy...
, against the emperor. In 1062, Beatrice tried to stop the Antipope Honorius II
Antipope Honorius II
Honorius II , born Pietro Cadalus, was an antipope from 1061 to 1072. He was born at Verona and became bishop of Parma in 1046. He died at Parma in 1072....
from reaching Rome
Rome
Rome is the capital of Italy and the country's largest and most populated city and comune, with over 2.7 million residents in . The city is located in the central-western portion of the Italian Peninsula, on the Tiber River within the Lazio region of Italy.Rome's history spans two and a half...
, but she failed.

In 1069, Godfrey died. Matilda was of age, yet Beatrice continued to exercise government in her name until the day she died. She was buried in the Cathedral of Pisa, where the Late Roman
Late Antiquity
Late Antiquity is a periodization used by historians to describe the time of transition from Classical Antiquity to the Middle Ages, in both mainland Europe and the Mediterranean world. Precise boundaries for the period are a matter of debate, but noted historian of the period Peter Brown proposed...
sarcophagus, bearing reliefs illustrating the story of Hippolytus and Phaedra, from which Nicola Pisano
Nicola Pisano
Nicola Pisano was an Italian sculptor whose work is noted for its classical Roman sculptural style. Pisano is sometimes considered to be the founder of modern sculpture.- Early life :His birth date or origins are uncertain...
adapted nude figures for his pulpit in the cathedral, reused for her sepulture can still be seen. The added 11th-century inscription reads:

On 29 August 1071, Beatrice founded the monastery Frassinoro
Frassinoro
Frassinoro is a comune in the Province of Modena in the Italian region Emilia-Romagna, located about 70 km southwest of Bologna and about 50 km southwest of Modena....
at the Apennine
Apennine
-Other places on Earth:*The Apennine or Italian peninsula*Apennins, a department of the first French Empire-Plants and animals:*The Apennine , a modern breed of domestic sheep.*Apennine Shrew, an insectivore endemic to Italy...
pass of Foce della Radici.