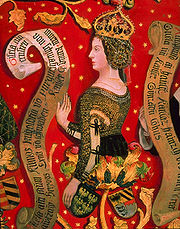 Gisela of Swabia was the daughter of Herman II of Swabia
Herman II, Duke of Swabia
Herman II was the Conradine duke of Swabia from 997 to his death, as the son of and successor Conrad I.Herman opposed the election of Henry IV, Duke of Bavaria, as king of Germany because he himself had been a contender...
and Gerberga of Burgundy
Gerberga of Burgundy
Gerberga of Burgundy was a daughter of Matilda of France and Conrad of Burgundy. Through her mother, she was a granddaughter of Louis IV of France and a descendent of Charlemagne.-Life and Issue:Gerberga was born in Arles....
. Both her parents were descendents of Charlemagne
Charlemagne
Charlemagne was King of the Franks from 768 and Emperor of the Romans from 800 to his death in 814. He expanded the Frankish kingdom into an empire that incorporated much of Western and Central Europe. During his reign, he conquered Italy and was crowned by Pope Leo III on 25 December 800...
.

Her third marriage, in 1016 or 1017, was to Conrad
Conrad II, Holy Roman Emperor
Conrad II was Holy Roman Emperor from 1027 until his death.The son of a mid-level nobleman in Franconia, Count Henry of Speyer and Adelaide of Alsace, he inherited the titles of count of Speyer and of Worms as an infant when Henry died at age twenty...
, who became Emperor in 1027. Aribo, Archbishop of Mainz refused to crown her, because he stated Gisela and Conrad were too closely related. Thirteen days after his coronation, Pilgrim, Archbishop of Cologne crowned her Empress of Germany instead.

She took care of her sister Matilda's daughters Sophie, Countess of Bar and Beatrice of Bar
Beatrice of Bar
Beatrice of Bar was the marchioness of Tuscany from 1053 to her death as the wife of Boniface III of Tuscany...
, who would both go on to play political roles as Countess of Bar
Counts and dukes of Bar
Bar was a historic duchy of both the Holy Roman Empire and the crown of France, though later totally incorporated with Lorraine into France in 1766. The duchy of Bar includes the "pays" of Barrois.- History :...
and regent
Regent
A regent, from the Latin regens "one who reigns", is a person selected to act as head of state because the ruler is a minor, not present, or debilitated. Currently there are only two ruling Regencies in the world, sovereign Liechtenstein and the Malaysian constitutive state of Terengganu...
of Tuscany
Tuscany
Tuscany is a region in Italy. It has an area of about 23,000 square kilometres and a population of about 3.75 million inhabitants. The regional capital is Florence ....
respectively.

After Conrad's death in 1038, she and her son Henry led the mourning progression.

Gisela died of dysentery
Dysentery
Dysentery is an inflammatory disorder of the intestine, especially of the colon, that results in severe diarrhea containing mucus and/or blood in the faeces with fever and abdominal pain. If left untreated, dysentery can be fatal.There are differences between dysentery and normal bloody diarrhoea...
in the royal palace
Imperial Palace of Goslar
The Imperial Palace of Goslar is a historical building complex at the foot of the Rammelsberg hill in the south of the town of Goslar north of the Harz mountains, central Germany. It covers an area of about 340 by 180 metres and stands. The palace grounds originally included the Kaiserhaus, the...
in Goslar
Goslar
Goslar is a historic town in Lower Saxony, Germany. It is the administrative centre of the district of Goslar and located on the northwestern slopes of the Harz mountain range. The Old Town of Goslar and the Mines of Rammelsberg are UNESCO World Heritage Sites.-Geography:Goslar is situated at the...
in 1043. She is interred in the grotto of the Imperial Cathedral of Speyer, Germany along with several emperors and other members of the imperial family. Her tomb was opened in 1900 and Gisela's mummified body was found to be 172 cm (5' 8") tall, with long blond hair.

Gisela and Bruno I, Count of Brunswick had: