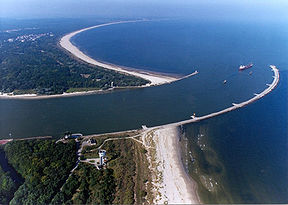 The Bay of Pomerania or Pomeranian Bay (Polish: Zatoka Pomorska; German: Pommersche Bucht; Kashubian: Pòmòrskô Hôwinga) is a basin in the southwestern Baltic Sea
Baltic Sea
The Baltic Sea is a brackish mediterranean sea located in Northern Europe, from 53°N to 66°N latitude and from 20°E to 26°E longitude. It is bounded by the Scandinavian Peninsula, the mainland of Europe, and the Danish islands. It drains into the Kattegat by way of the Øresund, the Great Belt and...
, off the shores of Poland
Poland
Poland , officially the Republic of Poland , is a country in Central Europe bordered by Germany to the west; the Czech Republic and Slovakia to the south; Ukraine, Belarus and Lithuania to the east; and the Baltic Sea and Kaliningrad Oblast, a Russian exclave, to the north...
and Germany
Germany
Germany , officially the Federal Republic of Germany , is a federal parliamentary republic in Europe. The country consists of 16 states while the capital and largest city is Berlin. Germany covers an area of 357,021 km2 and has a largely temperate seasonal climate...
.

In the south it is separated from the Oder Lagoon in the mouth of the Oder River by the islands of Usedom/Uznam
Usedom
Usedom is a Baltic Sea island on the border between Germany and Poland. It is situated north of the Szczecin Lagoon estuary of the River Oder in Pomerania...
and Wolin
Wolin
Wolin is the name both of an island in the Baltic Sea, just off the Polish coast, and a town on that island. It is separated from the island of Usedom by the Świna river, and from mainland Pomerania by the Dziwna river...
, connected by three straits or branches of the Oder: Dziwna
Dziwna
The Dziwna is an eastern strait, river or a branch of the Oder River out of three straits connecting the Oder Lagoon with the Bay of Pomerania of the Baltic Sea, between the island of Wolin and the Polish mainland.Major towns on the Dziwna include:* Wolin...
, Świna
Swina
The Świna is a river in Poland flowing from the Oder Lagoon to the Baltic Sea, between the islands of Usedom and Wolin. It is a part of the Oder River estuary, and carries about 75% of that river's waterflow . It has a length of about 16 km...
and Peene
Peene
The Peene is a river in Germany. The Westpeene, Kleine Peene and Ostpeene flow into the Kummerower See, and from there as Peene proper to Anklam and into the Oder Lagoon....
. North border is a line from Cape Arkona
Cape Arkona
Cape Arkona is a cape on the island of Rügen in Mecklenburg-Vorpommern, Germany. Cape Arkona is the tip of the Wittow peninsula, just a few kilometres north of the Jasmund National Park....
on the German island of Rügen
Rügen
Rügen is Germany's largest island. Located in the Baltic Sea, it is part of the Vorpommern-Rügen district of Mecklenburg-Vorpommern.- Geography :Rügen is located off the north-eastern coast of Germany in the Baltic Sea...
to the Gąski
Gąski, Koszalin County
Gąski is a village in the administrative district of Gmina Mielno, within Koszalin County, West Pomeranian Voivodeship, in north-western Poland. It lies approximately west of Koszalin and north-east of the regional capital Szczecin....
Lighthouse in the east of Kołobrzeg in Poland.

Maximum depth is 20 metres and salinity
Salinity
Salinity is the saltiness or dissolved salt content of a body of water. It is a general term used to describe the levels of different salts such as sodium chloride, magnesium and calcium sulfates, and bicarbonates...
is about 8‰. The bay of Pomerania is crossed by a deepened waterway from the Szczecin
Szczecin
Szczecin , is the capital city of the West Pomeranian Voivodeship in Poland. It is the country's seventh-largest city and the largest seaport in Poland on the Baltic Sea. As of June 2009 the population was 406,427....
seaport, via the river Oder
Oder
The Oder is a river in Central Europe. It rises in the Czech Republic and flows through western Poland, later forming of the border between Poland and Germany, part of the Oder-Neisse line...
, the Szczecin Lagoon, and Świna allowing large ships to enter the ports of Świnoujście
Swinoujscie
Świnoujście is a city and seaport on the Baltic Sea and Szczecin Lagoon, located in the extreme north-west of Poland. It is situated mainly on the islands of Uznam and Wolin, but also occupies smaller islands, of which the largest is Karsibór island, once part of Usedom, now separated by a Piast...
and Szczecin.