Encyclopedia
The Battle of Worringen was fought on June 5, 1288, near the town of Worringen (also spelled Woeringen), which is now the northernmost borough of Cologne
Cologne
Cologne is Germany's fourth-largest city , and is the largest city both in the Germany Federal State of North Rhine-Westphalia and within the Rhine-Ruhr Metropolitan Area, one of the major European metropolitan areas with more than ten million inhabitants.Cologne is located on both sides of the...
. The battle was fought for the possession of the Duchy of Limburg
Duchy of Limburg
The Duchy of Limburg, situated in the Low Countries between the river Meuse and the city of Aachen, was a state of the Holy Roman Empire. Its territory is now divided between the Belgian provinces of Liège and Limburg , the Dutch province of Limburg , and a small part of North Rhine-Westphalia in...
, and was one of the largest battles in Europe in the Middle Ages
Middle Ages
The Middle Ages is a periodization of European history from the 5th century to the 15th century. The Middle Ages follows the fall of the Western Roman Empire in 476 and precedes the Early Modern Era. It is the middle period of a three-period division of Western history: Classic, Medieval and Modern...
. 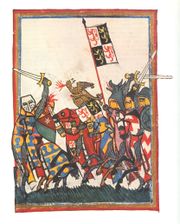 The conflict arose after the last Waleran IV, Duke of Limburg, had died without male heirs in 1279, and his duchy was inherited by his daughter Ermengarde, who had married Reginald I, Count of Guelders. When she died childless one year later, her husband claimed the Duchy of Limburg and in 1282 had his demand recognized by the German king Rudolph of Habsburg
Rudolph I of Germany
Rudolph I was King of the Romans from 1273 until his death. He played a vital role in raising the Habsburg dynasty to a leading position among the Imperial feudal dynasties...
.

However, Waleran's nephew Adolf VIII, Count of Berg
Adolf VIII of Berg
Adolf VIII of Berg was the eldest son of Count Adolf VII of Berg and Margaret of Hochstaden....
, son of his elder brother Adolf VII
Adolf VII of Berg
Adolf VII of Berg was the eldest son of Henry IV, Duke of Limburg and Irmgard of Berg.In 1247, Adolf succeeded his father as Count of Berg while his brother Waleran succeeded as Duke of Limburg...
, also claimed the duchy after Ermengarde's death. Unable to assert his claims, he sold them in 1283 to the mighty John I, Duke of Brabant
John I, Duke of Brabant
John I of Brabant, also called John the Victorious was Duke of Brabant , Lothier and Limburg .-Life:...
. Duke John intended to enlarge his territory and reunite the former Duchy of Lower Lorraine
Lower Lorraine
The Duchy of Lower Lorraine or Lower Lotharingia , established in 959 was a stem duchy of the medieval German kingdom, which encompassed part of modern-day Belgium, the Netherlands, the northern part of the German Rhineland and a part of northern France east of the Schelde river.It was created out...
, while Limburg was also economically important as it stretched along the major trade route to the Rhine. Though Brabant held the title of a Duke of Lothier
Duke of Lothier
Lothier refers to the territory within the Duchy of Lower Lotharingia, governed by the Dukes of Brabant and their successors after 1190 until the end of the Ancien Régime in 1796....
since 1190, it had been solely honorific and did not imply any inheritance claims. The Limburg nobles therefore refused to accept John's overlordship.

Between 1283 and 1288, the conflict was delayed by several smaller confrontations between both sides, none of them decisive. Meanwhile, most of the other local powers chose sides. Foremost Siegfried II of Westerburg
Siegfried II of Westerburg
Siegfried II of Westerburg was Archbishop of Cologne from 1275 to 1297.Siegfried was the second son of Siegfried IV, Count of Runkel in Westerburg...
, the Archishop of Cologne, suspiciously eyed John's gain in power. In view of their common interests he and Reginald I forged an alliance, joined by Henry VI, Count of Luxembourg, and his brother Waleran I, Count of Ligny
Waleran I of Luxembourg, Lord of Ligny
Waleram I of Luxembourg was since 1281 Lord of Ligny, Roussy and La Roche.He was the second son of Henry V, Count of Luxembourg and Margaret of Bar....
, as well as by Adolf, Count of Nassau. On the other side the Counts of Mark took the chance to affirm their independence from the Archbishop of Cologne and together with the Counts of Loon
County of Loon
The County of Loon was a state of the Holy Roman Empire, lying west of the Meuse river in present-day Flemish-speaking Belgium, and east of the old Duchy of Brabant. The most important cities of the county were Beringen, Bilzen, Borgloon, Bree, Hamont, Hasselt, Herk-de-Stad, Maaseik, Peer and...
, Tecklenburg and Waldeck
Waldeck (state)
Waldeck was a sovereign principality in the German Empire and German Confederation and, until 1929, a constituent state of the Weimar Republic. It comprised territories in present-day Hesse and Lower Saxony, ....
allied with Brabant and Berg.

In May 1288, Henry of Luxembourg had led a significant army into the Cologne region and Reinoud of Guelders finally sold his rights to Limburg to him, just before peace talks were scheduled. This angered John of Brabant, who started a campaign against Reinoud. By the end of the month, both sides met at Worringen, a castle on the Rhine held by the Archbishop of Cologne. John laid siege to the fortress, supported by the Cologne citizens, who were eager to emancipate themselves from the Archbishop's rule.

On the morning of June 5, Archbishop Siegfried marched toward Worringen at the head of his troops. In the earliest phases of the battle, John of Brabant and Henry VI, Count of Luxembourg, met in a fierce fight, in which Henry was killed. Soon after that, Siegfried entered the battle and was able to beat off the Berg troops and the Cologne militia, however with too little support from his back army. He was taken prisoner by John of Brabant and delivered to Adolf of Berg. The battle ended in a victory for Brabant when Reinoud of Guelders was captured by Daniel van Bouchout
Bouchout Castle
Bouchout Castle is a castle in the Flemish town of Meise, Belgium. In the 12th century, this territory of the young Duchy of Brabant was strategically positioned between the County of Flanders and the Berthout family, lords of Grimbergen...
and Lord Walram of Valkenburg had to retreat. Like his brother Henry, Walram of Ligny was killed in battle.

The number of deaths at the battle of Worringen is estimated at 1100 on the Guelders side and 40 on the Brabant side. The blood toll on the house of Luxembourg was particularly high: most of the male relatives of the later German emperor Henry VII
Henry VII, Holy Roman Emperor
Henry VII was the King of Germany from 1308 and Holy Roman Emperor from 1312. He was the first emperor of the House of Luxembourg...
perished there. Archbishop Siegfried was imprisoned for over a year at Schloss Burg
Schloss Burg
Burg Castle , located in Burg an der Wupper , is the largest reconstructed castle in North Rhine-Westphalia, Germany and a popular tourist attraction...
, before he paid a ransom and agreed to Count Adolf's demands. Worringen Castle and several other fortresses of the bishop were demolished. On 14 August 1288, Adolf granted Düsseldorf
Düsseldorf
Düsseldorf is the capital city of the German state of North Rhine-Westphalia and centre of the Rhine-Ruhr metropolitan region.Düsseldorf is an important international business and financial centre and renowned for its fashion and trade fairs. Located centrally within the European Megalopolis, the...
city rights, whereafter it became the capital of Berg. Reinoud of Guelders was released after he had renounced all claims to the Duchy of Limburg.

The Battle of Worringen meant a rise in the power of Brabant, Berg and Mark, while the City of Cologne gained its independence from the Archbishopric and finally the status of an Imperial city
Free Imperial City
In the Holy Roman Empire, a free imperial city was a city formally ruled by the emperor only — as opposed to the majority of cities in the Empire, which were governed by one of the many princes of the Empire, such as dukes or prince-bishops...
in 1475. The Duchy of Limburg was added to the Duchy of Brabant in 1289, an arrangement approved by King Rudolph and again by his former opponent Adolf of Nassau, after he was elected King of the Romans
King of the Romans
King of the Romans was the title used by the ruler of the Holy Roman Empire following his election to the office by the princes of the Kingdom of Germany...
in 1292. In Luxembourg, Henry VI was followed by his nine-year-old son Henry VII
Henry VII, Holy Roman Emperor
Henry VII was the King of Germany from 1308 and Holy Roman Emperor from 1312. He was the first emperor of the House of Luxembourg...
, who in 1292 settled the conflict with Brabant by marrying John's daughter Margaret
Margaret of Brabant
Margaret of Brabant , was the daughter of John I, Duke of Brabant and Margaret of Flanders. She was the wife of Count Henry of Luxemburg and after his coronation in 1308, she became Queen of Germany.-Family:...
. The Archbishopric of Cologne never recovered from the loss of the city of Cologne.