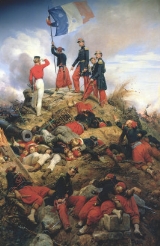 Encyclopedia
The Battle of Malakoff, during the Crimean War
Crimean War
The Crimean War was a conflict fought between the Russian Empire and an alliance of the French Empire, the British Empire, the Ottoman Empire, and the Kingdom of Sardinia. The war was part of a long-running contest between the major European powers for influence over territories of the declining...
, was fought between the French and Russian armies on 7 September 1855 as a part of the Siege of Sevastopol and resulted in a French victory under General MacMahon. In one of the war's defining moments, the French zouave
Zouave
Zouave was the title given to certain light infantry regiments in the French Army, normally serving in French North Africa between 1831 and 1962. The name was also adopted during the 19th century by units in other armies, especially volunteer regiments raised for service in the American Civil War...
Eugène Libaut installed the French flag on the top of the Russian redoubt. Malakoff brought about the capture of Sevastopol
Sevastopol
Sevastopol is a city on rights of administrative division of Ukraine, located on the Black Sea coast of the Crimea peninsula. It has a population of 342,451 . Sevastopol is the second largest port in Ukraine, after the Port of Odessa....
after one of the most memorable sieges of the 19th century.

The harbour of Sevastopol, formed by the estuary of the Chernaya
Chernaya River (Ukraine)
The Chorna, Chornaya or Chorhun River , which translates from the Ukrainian and Russian as "Black River", is a small river in Crimea, Ukraine. Its length is 34,5 km....
, was protected against attack by sea not only by the Russian war-vessels, afloat and sunken, but also by heavy granite forts on the south side and by the defensive works. For the town itself and the Karabelnaya suburb the trace of the works had been laid down for years. The Malakoff, a great tower of stone, covered the suburb, flanked on either side by the Redan
Redan
Redan is a term related to fortifications. It is a work in a V-shaped salient angle toward an expected attack...
and the Little Redan. The town was covered by a line of works marked by the Flagstaff and central bastions, and separated from the Redan by the inner harbour.

Lieut.-Col. Eduard Totleben
Eduard Totleben
Eduard Ivanovich Totleben was a Baltic German military engineer and Imperial Russian Army general. He was in charge of fortification and sapping work during a number of important Russian military campaigns.-Early life:...
, the Russian chief engineer, had very early begun work on these sites, and daily re-creating, rearming and improving the fortifications, finally connected them by a continuous enceinte. Yet Sevastopol was not, early in October 1854, the towering fortress it afterwards became, and Totleben himself maintained that, had the allies immediately assaulted, they would have succeeded in taking the place. There were, however, many reasons against so decided a course, and it was not until 17 October that the first attack took place.

All that day a tremendous artillery duel raged. The French siege corps suffered heavy losses and its guns were overpowered. The fleet engaged the harbour batteries close inshore, and suffered a loss of 500 men, besides severe damage to the ships. On the other hand the British siege batteries silenced the Malakoff and its annexes, and, if failure had not occurred at the other points of attack, an assault might have succeeded. As it was, by daybreak, Totleben's engineers had repaired and improved the damaged works.

For months the siege of Sevastopol continued. During July the Russians lost on an average 250 men a day, and at last it was decided that Gorchakov and the field army must make another attack at the Chernaya, the first since Inkerman. On 16 August the corps of
Liprandi and Read furiously attacked the 37,000 French and Sardinian troops on the heights above Traktir Bridge. The assailants came on with the greatest determination, but the result was never for one moment doubtful. At the end of the day, the Russians drew off baffled, leaving 260 officers and 8,000 men on the field; the allies only lost 1,700.

With this defeat vanished the last chance of saving Sevastopol. On the same 16 August, the bombardment once more reduced the Malakoff and its dependencies to impotence, and it was with absolute confidence in the result that Marshal Pélissier planned the final assault. On 8 September 1855 at noon, the whole of Bosquet'
Pierre Bosquet
Pierre François Joseph Bosquet was a French Army general. He served during the conquest of Algeria and the Crimean War; returning from Crimea he was made Marshal of France and senator.-Biography:...
s corps suddenly swarmed up to the Malakoff. The fighting was of the most desperate kind: every casemate, every traverse, was taken and retaken time after time, but the French maintained the prize, and though the British attack on the Redan once more failed, the Russians crowded in that work became at once the helpless target of the siege guns.

Even on the far left, at the opposite Flagstaff and Central bastions, there was severe hand-to-hand fighting. Throughout the day the bombardment mowed down the Russian masses along the whole line. The fall of the Malakoff was the end of the siege. That night the Russians filed over the bridges to the north side, and on September 9 the victors took possession of the empty and burning prize. The losses in the last assault had been very heavy: for the Allies over 10,000 men, for the Russians 13,000. No fewer than nineteen generals had fallen on the final day. But with the capture of Sevastopol the war was decided. No serious operations were undertaken against Gorchakov who, with the field army and the remnants of the garrison, held the heights at Mackenzie's Farm. But Kinburn
Battle of Kinburn (1855)
The Battle of Kinburn/Kil-Bouroun was a naval engagement during the final stage of the Crimean War. It took place on the tip of the Kinburn Peninsula on 17 October 1855...
was attacked by sea and, from the naval point of view, became the first instance of the employment of Ironclad warship
Ironclad warship
An ironclad was a steam-propelled warship in the early part of the second half of the 19th century, protected by iron or steel armor plates. The ironclad was developed as a result of the vulnerability of wooden warships to explosive or incendiary shells. The first ironclad battleship, La Gloire,...
s. An armistice was agreed upon on 26 February and the Treaty of Paris
Treaty of Paris (1856)
The Treaty of Paris of 1856 settled the Crimean War between Russia and an alliance of the Ottoman Empire, the British Empire, Second French Empire, and the Kingdom of Sardinia. The treaty, signed on March 30, 1856 at the Congress of Paris, made the Black Sea neutral territory, closing it to all...
was signed on 30 March 1856. 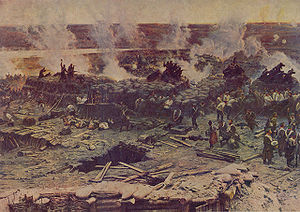 The strategically decisive importance of the siege of Sevastopol lies beneath the surface: why did the fall of a place, at first almost unfortified, lead to the end of the war. At first sight Russia would seem to be almost invulnerable to a sea power, and no first success, however crushing, could have humbled Nicholas I. Indeed the mere capture of Sevastopol would not have been strategically decisive. However, once the Tsar had decided to defend it at all costs, the Allies' unlimited resources operated in their favour.

The invaders were supplied by sea with whatever they needed, whilst the desert tracks of southern Russia were littered with the corpses of men and horses who had fallen bringing supplies to Sevastopol. The hasty nature, too, of the fortifications, which, daily crushed by the fire of a thousand guns, had to be re-created every night, made huge and therefore unprotected working parties necessary, and the losses were correspondingly heavy. The double cause of loss completely exhausted even Russia's resources, and, when the Russians were forced to employ large bodies of militia in the battle of Traktir Bridge, it was obvious that the end was at hand. The short stories of Leo Tolstoy
Leo Tolstoy
Lev Nikolayevich Tolstoy was a Russian writer who primarily wrote novels and short stories. Later in life, he also wrote plays and essays. His two most famous works, the novels War and Peace and Anna Karenina, are acknowledged as two of the greatest novels of all time and a pinnacle of realist...
, who was present at the siege, give a graphic picture of the war from the Russian point of view, portraying the miseries of the desert march, the still greater miseries of life in the casemates, and the almost daily ordeal of manning the lines, under shell-fire, against an assault which might or might not come.

During the Crimean War of 1853-1856, one of seven surviving defenders of a stone tower on the Malakov Kurgan, which were found by French troops among the dead, was seriously wounded Vasily Kolchak - the future father of the future Supreme ruler (head of all the counter-revolutionary anti-communist White forces
White movement
The White movement and its military arm the White Army - known as the White Guard or the Whites - was a loose confederation of Anti-Communist forces.The movement comprised one of the politico-military Russian forces who fought...
during the Russian Civil War
Russian Civil War
The Russian Civil War was a multi-party war that occurred within the former Russian Empire after the Russian provisional government collapsed to the Soviets, under the domination of the Bolshevik party. Soviet forces first assumed power in Petrograd The Russian Civil War (1917–1923) was a...
) of Russia Aleksandr Vasiliyevich Kolchak
Aleksandr Kolchak
Aleksandr Vasiliyevich Kolchak was a Russian naval commander, polar explorer and later - Supreme ruler . Supreme ruler of Russia , was recognized in this position by all the heads of the White movement, "De jure" - Kingdom of Serbs, Croats and Slovenes, "De facto" - Entente States...
.

In France, the battle was officially commemorated in a rare way: apart from the Battle of Magenta
Battle of Magenta
The Battle of Magenta was fought on June 4, 1859 during the Second Italian War of Independence, resulting in a French-Sardinian victory under Napoleon III against the Austrians under Marshal Ferencz Gyulai....
(in the Italian Campaign), it was the only one of Emperor Napoléon III Bonaparte's exploits to lead to the awarding of a victory title
Victory title
A victory title is an honorific title adopted by a successful military commander to commemorate his defeat of an enemy nation. This practice was first used by Ancient Rome and is still most commonly associated with the Romans, but it has also been adopted as a practice by many modern empires,...
(both of ducal rank); this distinction was bestowed upon Marshal Pélissier. A suburb of Paris
Malakoff
Malakoff is a suburban commune in the Hauts-de-Seine department southwest of Paris, France. It is located from the centre of the city.-History:The commune of Malakoff was created on 8 November 1883 by detaching its territory from the commune of Vanves...
was also named after this battle, as well as the Avenue de Malakoff
Avenue de Malakoff
The Avenue de Malakoff is a street in the 16th arrondissement of Paris. It was given its present name in 1854, the year in which French troops captured the Malakhov Tower during the Crimean War, leading to the subsequent capture of nearby Sebastopol the following year.410 metres long and 23.5...
. Malakhov Kurgan, where it was fought, contains the Eternal Fire, commemorating the Siege of Sevastopol (1942), and a branch of Franz Roubaud
Franz Roubaud
Franz Alekseyevich Roubaud was a Russian painter who created some of the largest and best known panoramic paintings.Roubaud was born on 15 June 1856 in Odessa and attended an art school there. In 1877 he went to Munich, where he studied at the Munich Academy...
's great panorama representing the battle of 1855.