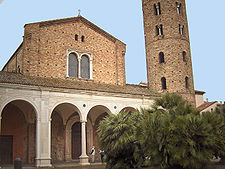 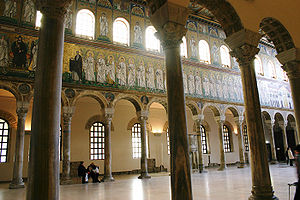 The Basilica of Sant' Apollinare Nuovo is a basilica
Basilica
The Latin word basilica , was originally used to describe a Roman public building, usually located in the forum of a Roman town. Public basilicas began to appear in Hellenistic cities in the 2nd century BC.The term was also applied to buildings used for religious purposes...
church in Ravenna
Ravenna
Ravenna is the capital city of the Province of Ravenna in the Emilia-Romagna region of Italy and the second largest comune in Italy by land area, although, at , it is little more than half the size of the largest comune, Rome...
, Emilia-Romagna
Emilia-Romagna
Emilia–Romagna is an administrative region of Northern Italy comprising the two historic regions of Emilia and Romagna. The capital is Bologna; it has an area of and about 4.4 million inhabitants....
(Italy
Italy
Italy , officially the Italian Republic languages]] under the European Charter for Regional or Minority Languages. In each of these, Italy's official name is as follows:;;;;;;;;), is a unitary parliamentary republic in South-Central Europe. To the north it borders France, Switzerland, Austria and...
). It was erected by the Ostrogoth
Ostrogoth
The Ostrogoths were a branch of the Goths , a Germanic tribe who developed a vast empire north of the Black Sea in the 3rd century AD and, in the late 5th century, under Theodoric the Great, established a Kingdom in Italy....
King Theodoric
Theodoric the Great
Theodoric the Great was king of the Ostrogoths , ruler of Italy , regent of the Visigoths , and a viceroy of the Eastern Roman Empire...
as his palace chapel, during the first quarter of the 6th century (as attested in the Liber Pontificalis
Liber Pontificalis
The Liber Pontificalis is a book of biographies of popes from Saint Peter until the 15th century. The original publication of the Liber Pontificalis stopped with Pope Adrian II or Pope Stephen V , but it was later supplemented in a different style until Pope Eugene IV and then Pope Pius II...
). This Arian
Arian
Arian may refer to:* Arius, a Christian presbyter in the 3rd and 4th century* a given name in different cultures: Aria, Aryan or Arian...
church was originally dedicated in 504 CE to Christ the Redeemer.

It was reconsecrated in 561, under the rule of the Byzantine emperor Justinian I
Justinian I
Justinian I ; , ; 483– 13 or 14 November 565), commonly known as Justinian the Great, was Byzantine Emperor from 527 to 565. During his reign, Justinian sought to revive the Empire's greatness and reconquer the lost western half of the classical Roman Empire.One of the most important figures of...
, under the new name "Sanctus Martinus in Coelo Aureo" ("Saint Martin in Golden Heaven"). Suppressing the Arian cult, the church was dedicated to Saint Martin of Tours, a foe of Arianism. According to legend, Pope Gregory the Great ordered that the mosaics in the church to be blackened, as their golden glory distracted worshippers from the prayers. The basilica was renamed again in 856
856
Year 856 was a leap year starting on Wednesday of the Julian calendar.- Asia :* December 22 – Another deadly earthquake strikes Damghan, Iran, killing 200,000 people.- Europe :...
, when relics of Saint Apollinaris were transferred from the Basilica of Sant'Apollinare in Classe
Basilica of Sant'Apollinare in Classe
The Basilica of Sant' Apollinare in Classe is an important monument of Byzantine art near Ravenna, Italy. When the UNESCO inscribed eight Ravenna sites on the World Heritage List, it cited this basilica as "an outstanding example of the early Christian basilica in its purity and simplicity of its...
because of the threat posed by frequent raids of Adriatic pirates.
Its apse
Apse
In architecture, the apse is a semicircular recess covered with a hemispherical vault or semi-dome...
and atrium
Atrium (architecture)
In modern architecture, an atrium is a large open space, often several stories high and having a glazed roof and/or large windows, often situated within a larger multistory building and often located immediately beyond the main entrance doors...
underwent modernization at various times, beginning in the 6th century with the destruction of mosaics whose themes were too overtly Arian or which expressed the king's glory, but the mosaics of the lateral walls, twenty-four columns with simplified Corinthian
Corinthian order
The Corinthian order is one of the three principal classical orders of ancient Greek and Roman architecture. The other two are the Doric and Ionic. When classical architecture was revived during the Renaissance, two more orders were added to the canon, the Tuscan order and the Composite order...
capital
Capital (architecture)
In architecture the capital forms the topmost member of a column . It mediates between the column and the load thrusting down upon it, broadening the area of the column's supporting surface...
s, and an Ambo
Ambon (liturgy)
The Ambon or Ambo is a projection coming out from the soleas in an Eastern Orthodox, Oriental Orthodox and Eastern Catholic church. The ambon stands directly in front of the Holy Doors...
are preserved. On some columns parts (arms ad hands) of figures once representing praying Goths and Theodoric's court, deleted in Byzantine times, can be seen. Renovations (and alterations) were done to the mosaics in the mid-19th century by Felice Kibel. The present apse is a reconstruction after being damaged during World War I
World War I
World War I , which was predominantly called the World War or the Great War from its occurrence until 1939, and the First World War or World War I thereafter, was a major war centred in Europe that began on 28 July 1914 and lasted until 11 November 1918...
.

On the upper band of the left lateral wall are 13 small mosaics, depicting Jesus' miracles and parables; and on the right wall are 13 mosaics depicting the Passion and Resurrection. However, the flagellation and crucifixion are lacking. They describe the parts of the Bible that were read aloud in the church during Lent under the rule of Theodoric the Great
Theodoric the Great
Theodoric the Great was king of the Ostrogoths , ruler of Italy , regent of the Visigoths , and a viceroy of the Eastern Roman Empire...
. On the left, Jesus is always depicted as young, beardless man, dressed as a Roman Emperor. On the right, Jesus is depicted with a beard. For the Arians, this emphasized that Jesus grew older and became a "man of sorrows", as spoken of by the prophet Isaiah. These mosaics are separated by decorative mosaic panels depicting a shell-shaped niche with a tapestry, cross, and two doves. These mosaics were executed by at least two artists.

The next row of mosaics are a scheme of haloed saints, prophets and evangelists, sixteen on each side. The figures are executed in a Hellenistic-Roman tradition and show a certain individuality of expression as compared to the other figures in the basilica. Each individual depicted holds a book, in either scroll or codex format, and, like many of the other figures throughout the basilica, each of their robes has a mark or symbol in it. These mosaics alternate with windows. They were executed in the time of Theodoric. 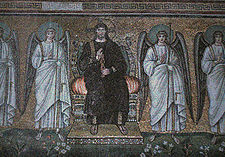 The row below contains large mosaics in Byzantine style, lacking any individuality, having all identical expressions. These were executed about 50 years after the time of bishop Agnellus, when the church had already become a Catholic church. To the left is a procession of the 22 Virgins of the Byzantine
Byzantine Empire
The Byzantine Empire was the Eastern Roman Empire during the periods of Late Antiquity and the Middle Ages, centred on the capital of Constantinople. Known simply as the Roman Empire or Romania to its inhabitants and neighbours, the Empire was the direct continuation of the Ancient Roman State...
period, led by the Three Magi, moving from the city of Classe towards the group of the Madonna and Child surrounded by four angels. To the right is a similar procession of 26 Martyrs, led by Saint Martin and including Saint Apollinaris, moving from the Palace of Theodoric towards a group representing Christ enthroned amid four angels. This lower band, containing a schematic representation of the Palatium on the right wall and the port of Classe with three ships on the left wall, gives us a certain idea of the architecture in Ravenna during the time of Theodoric. In another part of the church there is a rough mosaic containing the portrait of the Emperor Justinian.

The entrance of the church is preceded by a marble portico
Portico
A portico is a porch leading to the entrance of a building, or extended as a colonnade, with a roof structure over a walkway, supported by columns or enclosed by walls...
built in the 16th century. Next to the church, on the right side of the portico, stands a round bell tower dating from the 9th or 10th century.

When the UNESCO
UNESCO
The United Nations Educational, Scientific and Cultural Organization is a specialized agency of the United Nations...
inscribed the church on the World Heritage List, its experts pointed out that "both the exterior and interior of the basilica graphically illustrate the fusion between the western and eastern styles characteristic of the late 5th to early 6th century. This is one of the most important buildings from the period of crucial cultural significance in European religious art".http://whc.unesco.org/archive/advisory_body_evaluation/788.pdf