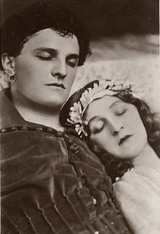 Encyclopedia
Basil Sydney was an English
England
England is a country that is part of the United Kingdom. It shares land borders with Scotland to the north and Wales to the west; the Irish Sea is to the north west, the Celtic Sea to the south west, with the North Sea to the east and the English Channel to the south separating it from continental...
actor who made over fifty screen appearances, most memorably as Claudius
King Claudius
King Claudius is a character and the antagonist from William Shakespeare's play Hamlet. He is the brother to King Hamlet, second husband to Gertrude and uncle to Hamlet. He obtained the throne of Denmark by murdering his own brother with poison and then marrying the late king's widow...
in Laurence Olivier
Laurence Olivier
Laurence Kerr Olivier, Baron Olivier, OM was an English actor, director, and producer. He was one of the most famous and revered actors of the 20th century. He married three times, to fellow actors Jill Esmond, Vivien Leigh, and Joan Plowright...
's 1948 film of Hamlet
Hamlet (1948 film)
Hamlet is a 1948 British film adaptation of William Shakespeare's play Hamlet, adapted and directed by and starring Sir Laurence Olivier. Hamlet was Olivier's second film as director, and also the second of the three Shakespeare films that he directed...
. He also appeared in classic films like Treasure Island
Treasure Island (1950 film)
Treasure Island is a 1950 Disney adventure film, adapted from the Robert Louis Stevenson's novel Treasure Island. It starred Bobby Driscoll as Jim Hawkins, and Robert Newton as Long John Silver...
(1950), Ivanhoe
Ivanhoe (1952 film)
Ivanhoe is a 1952 historical film made by MGM. It was directed by Richard Thorpe and produced by Pandro S. Berman. The cast featured Robert Taylor, Elizabeth Taylor, Joan Fontaine, George Sanders, Emlyn Williams, Finlay Currie and Felix Aylmer...
(1952) and Around the World in Eighty Days
Around the World in Eighty Days (1956 film)
Around the World in 80 Days is a 1956 adventure film produced by the Michael Todd Company and released by United Artists. It was directed by Michael Anderson. It was produced by Michael Todd, with Kevin McClory and William Cameron Menzies as associate producers. The screenplay was written by James...
(1956), but the focus of his career was the legitimate stage on both sides of the Atlantic.

In 1925 he divorced Keane; four years later, in 1929, he married actress Mary Ellis
Mary Ellis
Mary Ellis was a long-lived star of the British stage best known for her roles in the genre of musical theatre. After appearing with the Metropolitan Opera beginning in 1918, later appearing opposite Enrico Caruso, she acted on Broadway, creating the title role in Rose Marie...
, and the couple moved to England. There he concentrated more on film than on theatre work. In the 1940s he married English film actress Joyce Howard
Joyce Howard
Joyce Howard was a British film actress.-Filmography:* Freedom Radio * Love on the Dole * The Common Touch * Back-Room Boy * The Night Has Eyes...
; they had three children.