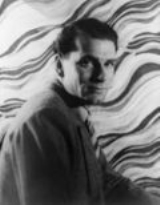 Overview
Laurence Kerr Olivier, Baron Olivier, OM
Order of Merit
The Order of Merit is a British dynastic order recognising distinguished service in the armed forces, science, art, literature, or for the promotion of culture...
(icon; 22 May 1907 11 July 1989) was an English actor, director, and producer
Theatrical producer
A theatrical producer is the person ultimately responsible for overseeing all aspects of mounting a theatre production. The independent producer will usually be the originator and finder of the script and starts the whole process...
. He was one of the most famous and revered actors of the 20th century. He married three times, to fellow actors Jill Esmond
Jill Esmond
Jill Esmond was an English actress and first wife of Sir Laurence Olivier.-Early life:Esmond was born Jill Esmond Moore in London, the daughter of stage actors Henry V. Esmond and Eva Moore. While her parents toured with theatre companies, Esmond spent her childhood in boarding schools until she...
, Vivien Leigh
Vivien Leigh
Vivien Leigh, Lady Olivier was an English actress. She won the Best Actress Academy Award for her portrayal of Blanche DuBois in A Streetcar Named Desire , a role she also played on stage in London's West End, as well as for her portrayal of the southern belle Scarlett O'Hara, alongside Clark...
, and Joan Plowright
Joan Plowright
Joan Ann Plowright, Baroness Olivier, DBE , better known as Dame Joan Plowright, is an English actress, whose career has spanned over sixty years. Throughout her career she has won two Golden Globe Awards and a Tony Award and has been nominated for an Academy Award, an Emmy, and two BAFTA Awards...
. Actor Spencer Tracy
Spencer Tracy
Spencer Bonaventure Tracy was an American theatrical and film actor, who appeared in 75 films from 1930 to 1967. Tracy was one of the major stars of Hollywood's Golden Age, ranking among the top ten box office draws for almost every year from 1938 to 1951...
said that Olivier was 'the greatest actor in the English-speaking world'.

Olivier played a wide variety of roles on stage and screen from Greek tragedy, Shakespeare
William Shakespeare
William Shakespeare was an English poet and playwright, widely regarded as the greatest writer in the English language and the world's pre-eminent dramatist. He is often called England's national poet and the "Bard of Avon"...
and Restoration comedy
Restoration comedy
Restoration comedy refers to English comedies written and performed in the Restoration period from 1660 to 1710. After public stage performances had been banned for 18 years by the Puritan regime, the re-opening of the theatres in 1660 signalled a renaissance of English drama...
to modern American and British drama.

If I wasn't an actor, I think I'd have gone mad. You have to have extra voltage, some extra temperament to reach certain heights. Art is a little bit larger than life — it's an exhalation of life and I think I you probably need a little touch of madness.

Never. The shot is too big for the cannon - On filming Shakespeare, before he did it.

As quoted in Olivier (2005) by Terry Coleman

As quoted in Olivier (2005) by Terry Coleman

Like coming for a living - On acting to a live audience

As quoted in Olivier (2005) by Terry Coleman
More
x