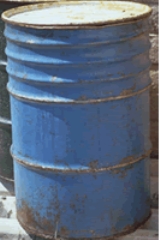 Encyclopedia
A barrel is one of several units
Units of measurement
A unit of measurement is a definite magnitude of a physical quantity, defined and adopted by convention and/or by law, that is used as a standard for measurement of the same physical quantity. Any other value of the physical quantity can be expressed as a simple multiple of the unit of...
of volume
Volume
Volume is the quantity of three-dimensional space enclosed by some closed boundary, for example, the space that a substance or shape occupies or contains....
, with dry barrels, fluid barrels (UK beer barrel, U.S. beer barrel), oil barrel, etc. The volume of some barrel units is double others, with various volumes in the range of about 100 –.

Some products have a standard weight or volume that constitutes a barrel:

Fluid barrels vary depending on what is being measured and where. For barrels of oil, see the next section.

The standard oil barrel of 42 US gallons is used in the United States as a measure of crude oil and other petroleum
Petroleum
Petroleum or crude oil is a naturally occurring, flammable liquid consisting of a complex mixture of hydrocarbons of various molecular weights and other liquid organic compounds, that are found in geologic formations beneath the Earth's surface. Petroleum is recovered mostly through oil drilling...
products. Elsewhere, oil is commonly measured in cubic metre
Cubic metre
The cubic metre is the SI derived unit of volume. It is the volume of a cube with edges one metre in length. An alternative name, which allowed a different usage with metric prefixes, was the stère...
s (m3) or in tonne
Tonne
The tonne, known as the metric ton in the US , often put pleonastically as "metric tonne" to avoid confusion with ton, is a metric system unit of mass equal to 1000 kilograms. The tonne is not an International System of Units unit, but is accepted for use with the SI...
s (t), with tonnes more often being used by European oil companies. International companies listed on American stock exchanges tend to express their oil-production volumes in barrels for global reporting purposes, and those listed on European exchanges tend to express their production in tonnes. There can be 6 to 8 barrels of oil in a ton, depending on density. For example: 256 U.S. gallons [6.1 bbl] of heavy distillate per ton, 272 gallons [6.5 bbl] of crude oil per ton, and 333 gallons [7.9 bbl] of gasoline per ton.
The wooden oil barrel of the late 19th century is different from the modern-day 55-gallon steel drum
Drum (container)
A drum is a cylindrical container used for shipping bulk cargo. Drums can be made of steel, dense paperboard , or plastics, and are generally used for the transportation and storage of liquids and powders. Drums are often certified for shipment of dangerous goods...
(known as the 45-gallon drum in Britain and the 210/200-litre/kg drum elsewhere). The 42-US-gallon oil barrel is a unit of measure, and is no longer used to transport crude oil, as most petroleum is moved in pipelines
Pipeline transport
Pipeline transport is the transportation of goods through a pipe. Most commonly, liquids and gases are sent, but pneumatic tubes that transport solid capsules using compressed air are also used....
or oil tanker
Oil tanker
An oil tanker, also known as a petroleum tanker, is a merchant ship designed for the bulk transport of oil. There are two basic types of oil tankers: the crude tanker and the product tanker. Crude tankers move large quantities of unrefined crude oil from its point of extraction to refineries...
s.

The measurement originated in the early Pennsylvania
Pennsylvania
The Commonwealth of Pennsylvania is a U.S. state that is located in the Northeastern and Mid-Atlantic regions of the United States. The state borders Delaware and Maryland to the south, West Virginia to the southwest, Ohio to the west, New York and Ontario, Canada, to the north, and New Jersey to...
oil field
Oil field
An oil field is a region with an abundance of oil wells extracting petroleum from below ground. Because the oil reservoirs typically extend over a large area, possibly several hundred kilometres across, full exploitation entails multiple wells scattered across the area...
s. In the early 1860s, when oil production began, there was no standard container for oil, so oil and petroleum products were stored and transported in barrels of different shapes and sizes. Some of these barrels would originally have been used for other products, such as beer, fish, molasses or turpentine. Both the 42-US-gallon
Gallon
The gallon is a measure of volume. Historically it has had many different definitions, but there are three definitions in current use: the imperial gallon which is used in the United Kingdom and semi-officially within Canada, the United States liquid gallon and the lesser used United States dry...
barrels (based on the old English wine measure), the tierce (159 litres) and the 40-US-gallon (151.4-litre) whiskey barrels were used. 45-gallon barrels were also in common use. The 40-gallon whiskey barrel was the most common size used by early oil producers, since they were readily available at the time.

The origins of the 42-gallon oil barrel are obscure, but some historical documents indicate that around 1866, early oil producers in Pennsylvania came to the conclusion that shipping oil in a variety of different containers was causing buyer distrust. They decided they needed a standard unit of measure to convince buyers that they were getting a fair volume for their money. They agreed to base this measure on the more-or-less standard 40-gallon whiskey barrel, but, as an additional way of assuring buyer confidence, they added an additional two gallons to ensure that any measurement errors would always be in the buyer's favor, on the same principle as that underlying the baker's dozen and some other long units of measure. By 1872, the standard oil barrel was firmly established as 42 US gallons.

The abbreviations 1 Mbbl and 1 MMbbl have historically meant one thousand and one million barrels respectively. They are derived from the Latin "mille" meaning "thousand" rather than the Greek "mega". However, this can cause confusion with the SI
International System of Units
The International System of Units is the modern form of the metric system and is generally a system of units of measurement devised around seven base units and the convenience of the number ten. The older metric system included several groups of units...
abbreviation for mega- (and in non-oil industry documentation Mbbl, "megabarrel
SI prefix
The International System of Units specifies a set of unit prefixes known as SI prefixes or metric prefixes. An SI prefix is a name that precedes a basic unit of measure to indicate a decadic multiple or fraction of the unit. Each prefix has a unique symbol that is prepended to the unit symbol...
", can sometimes stand for one million barrels).

The "b" may have been doubled originally to indicate the plural (1 bl, 2 bbl), or possibly it was doubled to eliminate any confusion with bl as a symbol for the bale. Some sources assert that "bbl" originated as a symbol for "blue barrels" delivered by Standard Oil
Standard Oil
Standard Oil was a predominant American integrated oil producing, transporting, refining, and marketing company. Established in 1870 as a corporation in Ohio, it was the largest oil refiner in the world and operated as a major company trust and was one of the world's first and largest multinational...
in its early days.

Barrels per day (abbreviated BPD, BOPD, bbl/d, bpd, bd or b/d) is a measurement used to describe the rate of crude-oil production or consumption by an entity. For example, an oil field
Oil field
An oil field is a region with an abundance of oil wells extracting petroleum from below ground. Because the oil reservoirs typically extend over a large area, possibly several hundred kilometres across, full exploitation entails multiple wells scattered across the area...
might produce 100,000 bpd, and a country might consume 1 million bpd.

Note: BPD is not to be confused with BLPD (barrels of liquids per day), which deals with the total liquid
Liquid
Liquid is one of the three classical states of matter . Like a gas, a liquid is able to flow and take the shape of a container. Some liquids resist compression, while others can be compressed. Unlike a gas, a liquid does not disperse to fill every space of a container, and maintains a fairly...
recovered, including water, and not only crude oil. BPD is related to BOE (Barrels of Oil Equivalent)
Barrel of oil equivalent
The barrel of oil equivalent is a unit of energy based on the approximate energy released by burning one barrel of crude oil. The US Internal Revenue Service defines it as equal to 5.8 × 106 BTU...
, a common way of expressing the energy content of hydrocarbon gases in terms of oil, in order to make comparisons.

According to BP
BP
BP p.l.c. is a global oil and gas company headquartered in London, United Kingdom. It is the third-largest energy company and fourth-largest company in the world measured by revenues and one of the six oil and gas "supermajors"...
Statistical Review 2006:

In terms of production and consumption, it is common to use thousand barrels per day or million barrels per day. These are commonly written as mbd and mmbd respectively taking "m" as the Roman numeral for 1000. It is important not to confuse these with SI
Si
Si, si, or SI may refer to :- Measurement, mathematics and science :* International System of Units , the modern international standard version of the metric system...
prefixes, where kbd and Mbd would mean a thousand and a million barrels per day respectively.

A barrel can technically be used to specify any volume. Since the actual nature of the fluids being measured varies along the stream, sometimes qualifiers are used to clarify what is being specified. In the oil field, it is often important to differentiate between rates of production of fluids, which may be a mix of oil and water, and rates of production of the oil itself. If a well is producing 10mbd of fluids with a 20% water cut, then the well would also be said to be producing 8 thousand barrels of oil a day (mbod).

In other circumstances, it can be important to include gas
Natural gas
Natural gas is a naturally occurring gas mixture consisting primarily of methane, typically with 0–20% higher hydrocarbons . It is found associated with other hydrocarbon fuel, in coal beds, as methane clathrates, and is an important fuel source and a major feedstock for fertilizers.Most natural...
in production and consumption figures. Normally, gas is measured in standard cubic feet, but when necessary, this volume is converted to a volume of oil of equivalent enthalpy
Enthalpy
Enthalpy is a measure of the total energy of a thermodynamic system. It includes the internal energy, which is the energy required to create a system, and the amount of energy required to make room for it by displacing its environment and establishing its volume and pressure.Enthalpy is a...
of combustion. Production and consumption using this analogue is stated in barrels of oil equivalent per day (boed).