Barisal City has one police
Police
The police is a personification of the state designated to put in practice the enforced law, protect property and reduce civil disorder in civilian matters. Their powers include the legitimized use of force...
academy.

Barisal was a semi-independent area in Mughal
Mughal Empire
The Mughal Empire ,‎ or Mogul Empire in traditional English usage, was an imperial power from the Indian Subcontinent. The Mughal emperors were descendants of the Timurids...
period because of heavy fighting between them and Hindu
Hindu
Hindu refers to an identity associated with the philosophical, religious and cultural systems that are indigenous to the Indian subcontinent. As used in the Constitution of India, the word "Hindu" is also attributed to all persons professing any Indian religion...
chiefs. In course of time, it fell under Bengal Nawabs
Nawab of Bengal
The Nawabs of Bengal were the hereditary nazims or subadars of the subah of Bengal during the Mughal rule and the de-facto rulers of the province.-History:...
and British India, later passed to Bangladesh.

Following the partition of India in 1947, the area of Bangladesh became a province of Pakistan, initially known as East Bengal, and then, from 1955, as East Pakistan. The people of East Pakistan Province declared their independence as the nation of Bangladesh on March 26, 1971, while fighting a savage war against the central Pakistani government. The separation from Pakistan took place, with extensive aid from India, on December 16, 1971 as a result of the third Indo-Pakistan War. Bangladesh was soon recognized by most other nations, although Pakistan withheld diplomatic recognition until 1974 and China did not recognize the nation until 1976. Bangladesh was admitted to the United Nations in 1974.

The central city of this region is the city of Barisal. It is one of the biggest river ports in Bangladesh. It is a city with nearly 0.38 million people and a divisional headquarter, medical college, cadet college, some pharmaceutical industries, textile industries and the Bangladesh Inland Water Transport Authority
Bangladesh Inland Water Transport Authority
Bangladesh Inland Water Transport Authority also known as BIWTA is the authority who controls the inland water transport in Bangladesh. It's also responsible for managing development and maintenance of inland water transport system.- Formation :...
's head office. Barisal is fast growing city of the country stands on the Kirtankhola River. Country's first short landing and take off airport has been completed in Barisal and a private Airlines named Air Bengal has begun its regular air flight between Dhaka Tejgaon Airport and Barisal.

Bangladesh has a tropical monsoon-type climate, with a hot and rainy summer and a dry winter. January is the coolest month with temperatures averaging near 26 deg C (78 d F) and April the warmest with temperatures from 33 to 36 deg C (91 to 96 deg F). The climate is one of the wettest in the world. Most places receive more than 1,525 mm of rain a year, and areas near the hills receive 5,080 mm ). Most rains occur during the monsoon (June–September) and little in winter (November–February).

Bangladesh is subject to devastating cyclones, originating over the Bay of Bengal, in the periods of April to May and September to November. Often accompanied by surging waves, these storms can cause great damage and loss of life. The cyclone of November 1970, in which about 500,000 lives were lost in Bangladesh, was one of the worst natural disasters of the country in the 20th century.

Required clothing: Lightweight cottons and linens throughout the year. Warmer clothes are needed in the evenings during the cool season. Waterproofs are necessary during the monsoon season.

The majority of the people of Barisal (90.64 per cent) identify themselves as Muslim
Muslim
A Muslim, also spelled Moslem, is an adherent of Islam, a monotheistic, Abrahamic religion based on the Quran, which Muslims consider the verbatim word of God as revealed to prophet Muhammad. "Muslim" is the Arabic term for "submitter" .Muslims believe that God is one and incomparable...
s.This is followed by those of Hindu
Hindu
Hindu refers to an identity associated with the philosophical, religious and cultural systems that are indigenous to the Indian subcontinent. As used in the Constitution of India, the word "Hindu" is also attributed to all persons professing any Indian religion...
s (8.38 per cent) and Christian
Christian
A Christian is a person who adheres to Christianity, an Abrahamic, monotheistic religion based on the life and teachings of Jesus of Nazareth as recorded in the Canonical gospels and the letters of the New Testament...
s (0.98 per cent).There are about 3941 Mosques, 805 temples, 44 churches and 5 tombs. 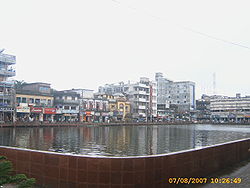 Barisal is a major center for higher education in Bangladesh. Few of city’s education institutions are...
There are also a Physical education college, a Nursing institute and two Teacher's training colleges.

The primary and secondary schools/colleges of Barisal are controlled by the Boards of Intermediate and Secondary Education,Barisal, most of them are public though there are also a number of private one.

Numbers of primary and secondary schools/college are shown below:

Barisal is a center for the newspaper, periodical and book publishers. Some locally published newspaper
Newspaper
A newspaper is a scheduled publication containing news of current events, informative articles, diverse features and advertising. It usually is printed on relatively inexpensive, low-grade paper such as newsprint. By 2007, there were 6580 daily newspapers in the world selling 395 million copies a...
s and periodicals are:

Durgasagar: with an area of about 2,500 hectare, is the largest pond or dighi of southern Bangladesh. It is located at Madhabpasa village of babuganj upazila, about 11 km away from barisal town. Locally it is known as Madhabpasha Dighi. According to a desire of Rani Durgavati, mother of Raja Joynarayan, the dighi was dug in 1780 (1187 BS). There are coconut trees around the dighi which together with the dighi are bounded by brick-walls. In the middle of the dighi, there is an island with bushes. Migratory birds usually come here during winter. The surrounding areas of the dighi has now been turned into a picnic spot.

Barisal airport
Barisal Airport
Barisal Airport is located in the southern city of Barisal in Bangladesh. The airport served for domestic flights to Dhaka in the past.-External links:*...
is not an international airport
International airport
An international airport is any airport that can accommodate flights from other countries and are typically equipped with customs and immigration facilities to handle these flights to and from other countries...
. Only Bangladesh Biman and Air Parabat  use this port. Active routes are Barisal-Dhaka
Dhaka
Dhaka is the capital of Bangladesh and the principal city of Dhaka Division. Dhaka is a megacity and one of the major cities of South Asia. Located on the banks of the Buriganga River, Dhaka, along with its metropolitan area, had a population of over 15 million in 2010, making it the largest city...
and Barisal-Chittagong
Chittagong
Chittagong ) is a city in southeastern Bangladesh and the capital of an eponymous district and division. Built on the banks of the Karnaphuli River, the city is home to Bangladesh's busiest seaport and has a population of over 4.5 million, making it the second largest city in the country.A trading...
.

Many Bus company connect Barisal to other districts. Some of them are...

River is also a popular transport system with other district.The luxurious launch journey connects between the south and Dhaka city. It is one of the most enjoyable night journey ever you could get in your life. The launches are really royal, majestic and with pomp and pleasure. Some royal launches are:

Barisal is a rice producing center of Bangladesh. Balam (a kind of baasmati) is the most popular rice in Barisal. It is also famous for Betel Leaf, a typical south Asian chewing item. As Barisal is surrounded by river so fish is plenty in there.It is said..

Coconut is very common in there as it is a coastal area. Hog Plum in Barisal is very famous.

Barisal's buildings are too diverse to be characterised by any particular architectural style, and have been built over a long period of time.

Some well known heritage are as follows: