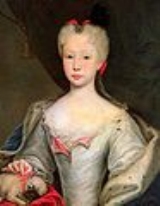 Encyclopedia
Barbara of Portugal was an Infanta of Portugal and later Queen
Queen consort
A queen consort is the wife of a reigning king. A queen consort usually shares her husband's rank and holds the feminine equivalent of the king's monarchical titles. Historically, queens consort do not share the king regnant's political and military powers. Most queens in history were queens consort...
of Spain
Spain
Spain , officially the Kingdom of Spain languages]] under the European Charter for Regional or Minority Languages. In each of these, Spain's official name is as follows:;;;;;;), is a country and member state of the European Union located in southwestern Europe on the Iberian Peninsula...
as wife of Ferdinand VI of Spain
Ferdinand VI of Spain
Ferdinand VI , called the Learnt, was King of Spain from 9 July 1746 until his death. He was the fourth son of the previous monarch Philip V and his first wife Maria Luisa of Savoy...
.

She was the eldest child of King John V of Portugal and his wife, Archduchess Maria Anna of Austria
Maria Anna of Austria
Archduchess Maria Anna of Austria , was Electress of Bavaria as the spouse of Maximilian I, Elector of Bavaria. She also served as Regent of Bavaria during the minority of her son...
, a daughter of Emperor Leopold I
Leopold I, Holy Roman Emperor
| style="float:right;" | Leopold I was a Holy Roman Emperor, King of Hungary and King of Bohemia. A member of the Habsburg family, he was the second son of Emperor Ferdinand III and his first wife, Maria Anna of Spain. His maternal grandparents were Philip III of Spain and Margaret of Austria...
. She was a first cousin of the future Empress Maria Theresa as well as Maria Josepha of Austria
Maria Josepha of Austria
Maria Josepha of Austria was born an Archduchess of Austria, and from 1711 to 1713 was heiress presumptive to the Habsburg Empire...
. Her parents were married in 1708, but for nearly three years the queen did not give birth to any children. The King then made a promise to God that if an heir to the throne was born, a great convent
Convent
A convent is either a community of priests, religious brothers, religious sisters, or nuns, or the building used by the community, particularly in the Roman Catholic Church and in the Anglican Communion...
would be built to thank Him. On 4 December 1711 Barbara was born, and the Convent of Mafra was built.

She was born as heiress-presumptive to the Portuguese throne, but her status as heiress lapsed when the Queen gave birth to a son, Pedro, two years later. Her title while she was heir to the throne was Princess of Brazil or Princesa do Brasil in its Portuguese form. Pedro died at the age of two, but another son, Joseph, had been born before Pedro's death. Though Barbara was never heiress-presumptive again, she was second-in-line to the throne throughout much of her life.

The Princess was baptised Maria Madalena Bárbara Xavier Leonor Teresa Antónia Josefa, her names honouring a number of saints and relatives. She was usually referred to as Bárbara or Maria Bárbara, a name never before used among Portuguese royals, in honour of Saint Barbara, the saint of her birthday.

She had a fine education and loved music. An accomplished keyboard player, she was a student of Domenico Scarlatti
Domenico Scarlatti
Giuseppe Domenico Scarlatti was an Italian composer who spent much of his life in the service of the Portuguese and Spanish royal families. He is classified as a Baroque composer chronologically, although his music was influential in the development of the Classical style...
, the famous harpsichordist
Harpsichordist
A harpsichordist is a person who plays the harpsichord.Many baroque composers played the harpsichord, including Johann Sebastian Bach, Domenico Scarlatti, George Frideric Handel, François Couperin and Jean-Philippe Rameau...
and composer
Composer
A composer is a person who creates music, either by musical notation or oral tradition, for interpretation and performance, or through direct manipulation of sonic material through electronic media...
, from age 9 or 10 until age 14. She was considered to marry Louis XV of France
Louis XV of France
Louis XV was a Bourbon monarch who ruled as King of France and of Navarre from 1 September 1715 until his death. He succeeded his great-grandfather at the age of five, his first cousin Philippe II, Duke of Orléans, served as Regent of the kingdom until Louis's majority in 1723...
.

In 1729 at age 18, she married the future Ferdinand VI of Spain
Ferdinand VI of Spain
Ferdinand VI , called the Learnt, was King of Spain from 9 July 1746 until his death. He was the fourth son of the previous monarch Philip V and his first wife Maria Luisa of Savoy...
, two years her junior. Her brother Joseph married Ferdinand's half-sister, the Spanish Infanta Mariana Victoria
Mariana Victoria of Spain
Mariana Victoria of Spain was an Infanta of Spain and Queen consort of Portugal as wife of King Joseph I. The mother of Queen Maria I of Portugal, she also acted as Regent of Portugal during the last months of her husband's life and advisor to her daughter during her reign.-Background:Mariana...
, previously rejected bride of Louis XV. The double marriage was meant to repair the Portuguese-Spanish alliance. Scarlatti followed her to Madrid
Madrid
Madrid is the capital and largest city of Spain. The population of the city is roughly 3.3 million and the entire population of the Madrid metropolitan area is calculated to be 6.271 million. It is the third largest city in the European Union, after London and Berlin, and its metropolitan...
on her marriage and remained with her, composing hundreds of harpsichord
Harpsichord
A harpsichord is a musical instrument played by means of a keyboard. It produces sound by plucking a string when a key is pressed.In the narrow sense, "harpsichord" designates only the large wing-shaped instruments in which the strings are perpendicular to the keyboard...
sonatas for her. During her husband's reign, Barbara presided over magnificent parties and concerts at the Royal Palace of Aranjuez
Aranjuez
Aranjuez is a town lying 48 km south of Madrid, in the southern part of the Community of Madrid. It is located at the confluence of the Tagus and Jarama rivers, 48 km from Toledo. As of 2009, it has a population of 54,055.-History:...
, which was her favourite retreat.

Although Barbara was not beautiful — her homely looks were thought by observers to cause the prince a visible shock when he was first presented to her — 'Ferdinand the Learned' (as he was called) became deeply attached to her, sharing her passion for music. Ferdinand soon became dependent on Barbara for advice and support; when he ascended the Spanish crown as Ferdinand VI, the French ambassador noted "it is rather Barbara who succeeds Elizabeth [step-mother of Ferdinand] than Ferdinand succeeding Philippe." Barbara was well-educated, adept at languages, an avid reader of many differing subjects, and had a love of music.

The couple produced no children, though Barbara had a stillborn son in 1733. Barbara suffered from severe asthma
Asthma
Asthma is the common chronic inflammatory disease of the airways characterized by variable and recurring symptoms, reversible airflow obstruction, and bronchospasm. Symptoms include wheezing, coughing, chest tightness, and shortness of breath...
for most of her life. She became quite overweight later in life. Barbara's death was said to have broken his heart. She died at the Royal Palace of Aranjuez, on the outskirts of Madrid
Madrid
Madrid is the capital and largest city of Spain. The population of the city is roughly 3.3 million and the entire population of the Madrid metropolitan area is calculated to be 6.271 million. It is the third largest city in the European Union, after London and Berlin, and its metropolitan...
on 27 August 1758.