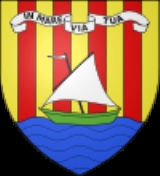 Encyclopedia
Banyuls-sur-Mer is a commune
Communes of France
The commune is the lowest level of administrative division in the French Republic. French communes are roughly equivalent to incorporated municipalities or villages in the United States or Gemeinden in Germany...
in the Pyrénées-Orientales
Pyrénées-Orientales
Pyrénées-Orientales is a department of southern France adjacent to the northern Spanish frontier and the Mediterranean Sea. It also surrounds the tiny Spanish enclave of Llívia, and thus has two distinct borders with Spain.- History :...
department in southern France
France
The French Republic , The French Republic , The French Republic , (commonly known as France , is a unitary semi-presidential republic in Western Europe with several overseas territories and islands located on other continents and in the Indian, Pacific, and Atlantic oceans. Metropolitan France...
.

Banyuls-sur-Mer is neighbored by Cerbère
Cerbère
Cerbère is a commune in the Pyrénées-Orientales department in southern France. Its inhabitants are called Cerbériens....
, Port-Vendres
Port-Vendres
Port-Vendres is a commune in the Pyrénées-Orientales department in southern France.A typical Mediterranean fishing port, situated near the Spanish border on the cote Vermeille in south west France, Port-Vendres is renowned for its numerous fish and sea food restaurants. You can watch the fishing...
, Argelès-sur-Mer
Argelès-sur-Mer
Argelès-sur-Mer is a commune in the Pyrénées-Orientales department in southern France.It lies near Perpignan.-Geography:...
and Collioure
Collioure
Collioure is a commune in the Pyrénées-Orientales department in southern France.It lies on the Mediterranean and was a part of the ancient Roussillon province....
. The region is known for its wine
Wine
Wine is an alcoholic beverage, made of fermented fruit juice, usually from grapes. The natural chemical balance of grapes lets them ferment without the addition of sugars, acids, enzymes, or other nutrients. Grape wine is produced by fermenting crushed grapes using various types of yeast. Yeast...
s, such as the sweet wine Banyuls. An aquatic museum with aquarium is located in the town. The foothills of Pyrenees
Pyrenees
The Pyrenees is a range of mountains in southwest Europe that forms a natural border between France and Spain...
, the Monts Albères, run into the Mediterranean Sea
Mediterranean Sea
The Mediterranean Sea is a sea connected to the Atlantic Ocean surrounded by the Mediterranean region and almost completely enclosed by land: on the north by Anatolia and Europe, on the south by North Africa, and on the east by the Levant...
in Banyuls-sur-Mer, creating a steep cliff line.

The name Banyuls indicates the presence of a pond
Pond
A pond is a body of standing water, either natural or man-made, that is usually smaller than a lake. A wide variety of man-made bodies of water are classified as ponds, including water gardens, water features and koi ponds; all designed for aesthetic ornamentation as landscape or architectural...
. In fact, a pond did exist in Banyuls-sur-Mer until the creek Vallauria was drained in 1872. The term Marenda in Catalan or sur Mer in French
French language
French is a Romance language spoken as a first language in France, the Romandy region in Switzerland, Wallonia and Brussels in Belgium, Monaco, the regions of Quebec and Acadia in Canada, and by various communities elsewhere. Second-language speakers of French are distributed throughout many parts...
merely indicates the proximity to the coast.

Banyuls-sur-Mer is twinned
Town twinning
Twin towns and sister cities are two of many terms used to describe the cooperative agreements between towns, cities, and even counties in geographically and politically distinct areas to promote cultural and commercial ties.- Terminology :...
with a small town called Settle
Settle
Settle is a small market town and civil parish within the Craven district of North Yorkshire, England. It is served by the Settle railway station, which is located near the town centre, and Giggleswick railway station which is a mile away. It is from Leeds Bradford Airport...
which is in North Yorkshire
North Yorkshire
North Yorkshire is a non-metropolitan or shire county located in the Yorkshire and the Humber region of England, and a ceremonial county primarily in that region but partly in North East England. Created in 1974 by the Local Government Act 1972 it covers an area of , making it the largest...
, United Kingdom
United Kingdom
The United Kingdom of Great Britain and Northern IrelandIn the United Kingdom and Dependencies, other languages have been officially recognised as legitimate autochthonous languages under the European Charter for Regional or Minority Languages...
and also with town of Kralupy nad Vltavou
Kralupy nad Vltavou
Kralupy nad Vltavou is a city in the Central Bohemian Region of the Czech Republic. It has about 18,000 inhabitants. The city lies on the Vltava River some north of Prague, the capital of both the Czech Republic and the Central Bohemian Region...
located in Central Bohemian Region
Central Bohemian Region
Central Bohemian Region is an administrative unit of the Czech Republic, located in the central part of its historical region of Bohemia. Its administrative center is placed in the Czech capital Prague , which lies in the center of the region...
of the Czech Republic
Czech Republic
The Czech Republic is a landlocked country in Central Europe. The country is bordered by Poland to the northeast, Slovakia to the east, Austria to the south, and Germany to the west and northwest....
.

For nearly two centuries, the smuggling
Smuggling
Smuggling is the clandestine transportation of goods or persons, such as out of a building, into a prison, or across an international border, in violation of applicable laws or other regulations.There are various motivations to smuggle...
of goods to and from Spain was a major activity in Banyuls-sur-Mer. Depending on the needs of the time, salt, tobacco, silver, sugar, rice, textiles, and leather were smuggled through this city, almost always with impunity. Otherwise the inhabitants lived mainly from fishing and viticulture
Viticulture
Viticulture is the science, production and study of grapes which deals with the series of events that occur in the vineyard. When the grapes are used for winemaking, it is also known as viniculture...
. Nowadays, tourism stemming from the wine industry plays a significant economic role in the town notably for delicious and rare red dessert wines. Under the Collioure appellation
Collioure AOC
Collioure is an Appellation d'Origine Contrôlée for French wines situated around the town of Collioure in the Roussillon wine region of France. Red, rosé and a few white wines are produced-the reds from Grenache Noir, Mourvèdre, Syrah, Carignan and Cinsaut grapes; the white are made from a blend...
, the town is also a center of quality dry reds, rosés and whites, with a number of producers of natural wines.