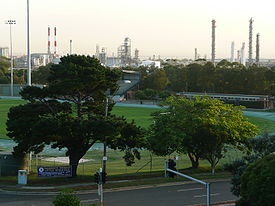 Banksmeadow is named in honour of botanist Sir Joseph Banks
Joseph Banks
Sir Joseph Banks, 1st Baronet, GCB, PRS was an English naturalist, botanist and patron of the natural sciences. He took part in Captain James Cook's first great voyage . Banks is credited with the introduction to the Western world of eucalyptus, acacia, mimosa and the genus named after him,...
, who travelled to Australia with Captain James Cook in 1770. Botany Bay is where they first landed ashore on 29 April 1770, when navigating around Australia on the Endeavour
HM Bark Endeavour
HMS Endeavour, also known as HM Bark Endeavour, was a British Royal Navy research vessel commanded by Lieutenant James Cook on his first voyage of discovery, to Australia and New Zealand from 1769 to 1771....
.

Banksmeadow is a largely industrial area with commercial and industrial developments associated with nearby Port Botany
Port Botany, New South Wales
Port Botany is a suburb in south-eastern Sydney, in the state of New South Wales, Australia. Port Botany is located 12 kilometres south-east of the Sydney central business district, is in the local government area of the City of Randwick...
. This includes a number of oil terminals, the Sydenham-Botany Goods Railway and a large Orica Limited chemical facility.

Foreshore Beach (also known as Botany Beach) runs along the shore of Botany Bay
Botany Bay
Botany Bay is a bay in Sydney, New South Wales, a few kilometres south of the Sydney central business district. The Cooks River and the Georges River are the two major tributaries that flow into the bay...
. Part of the sandy public beach has been lost in recent years due to the expansion of port facilities by The Sydney Ports Corporation. A rock seawall along a large part of the beach has greatly restricted its use as a public beach. The area includes Banksmeadow Park and Botany Golf Course.

Banksmeadow Public School is located at the corner of Wiggins and Trevelyan Streets, Botany. It was established in 1881.