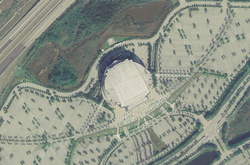 The BankAtlantic Center is an indoor arena located in Sunrise, Florida
Sunrise, Florida
-Overview:Sunrise is a city in southwestern Broward County, Florida, United States. It was incorporated in 1961 by Norman Johnson – a developer whose World Famous Upside-Down House attracted buyers to what was then a remote area...
, a suburb of Fort Lauderdale, Florida
Fort Lauderdale, Florida
Fort Lauderdale is a city in the U.S. state of Florida, on the Atlantic coast. It is the county seat of Broward County. As of the 2010 census, the city had a population of 165,521. It is a principal city of the South Florida metropolitan area, which was home to 5,564,635 people at the 2010...
, and adjacent to the popular Sawgrass Mills Mall.

The arena is directly accessible from the Sawgrass Expressway
Sawgrass Expressway
State Road 869 is a long state road located in Broward County, Florida. The road acts as a de-facto bypass of Fort Lauderdale and northern coastal Broward County, Florida, extending north from a junction of Interstate 75 , Interstate 595 , and SR 84 in Sunrise, to Coral Springs before heading...
northbound at the Pat Salerno Drive exit, and in both directions at the Oakland Park Boulevard and Sunrise Boulevard exits.

The arena is home to the Florida Panthers
Florida Panthers
The Florida Panthers are a professional ice hockey team based in Sunrise, Florida, in the Miami metropolitan area. They are members of the Southeast Division of the Eastern Conference of the National Hockey League . They play their games at the BankAtlantic Center in Sunrise and are the...
of the National Hockey League
National Hockey League
The National Hockey League is an unincorporated not-for-profit association which operates a major professional ice hockey league of 30 franchised member clubs, of which 7 are currently located in Canada and 23 in the United States...
, the Miami Caliente
Miami Caliente
Miami Caliente was a team in the Lingerie Football League, 2009-2010. They were part of the Lingerie Bowl's expansion into a full-fledged league in 2009. They play their home games at the BankAtlantic Center in Sunrise, Florida...
of the Lingerie Football League
Lingerie Football League
The Lingerie Football League is a women's 7-on-7 tackle American football league, created in 2009, with games played in the fall and winter at NBA, NFL, NHL and MLS arenas and stadiums. The league was founded by Mitch Mortaza...
and was to the Florida Pit Bulls of the American Basketball Association
American Basketball Association
The American Basketball Association was a professional basketball league founded in 1967. The ABA ceased to exist with the ABA–NBA merger in 1976.-League history:...
when they existed.

The search for a new arena began in 1992, when H. Wayne Huizenga obtained the new franchise for the Florida Panthers
Florida Panthers
The Florida Panthers are a professional ice hockey team based in Sunrise, Florida, in the Miami metropolitan area. They are members of the Southeast Division of the Eastern Conference of the National Hockey League . They play their games at the BankAtlantic Center in Sunrise and are the...
hockey
Ice hockey
Ice hockey, often referred to as hockey, is a team sport played on ice, in which skaters use wooden or composite sticks to shoot a hard rubber puck into their opponent's net. The game is played between two teams of six players each. Five members of each team skate up and down the ice trying to take...
team, who initially played at the now-demolished Miami Arena
Miami Arena
The Miami Arena was an indoor arena in Miami, Florida.-History:Completed in 1988, at a cost of $52.5 million, its opening took business away from the Hollywood Sportatorium and eventually led to its demise...
. The search process became a fast-track development strategy when the site in Sunrise, Florida, was selected in June 1996. In July 1996, Alex Muxo gathered more than a dozen architects, engineers and contractors for the first major design brainstorming session. Time was of the essence. A state-of-the-art arena had to be built by August 30, 1998, to accommodate the fall 1998 Hockey Season.

Seventy suites were completed with wet bars
Bar (establishment)
A bar is a business establishment that serves alcoholic drinks — beer, wine, liquor, and cocktails — for consumption on the premises.Bars provide stools or chairs that are placed at tables or counters for their patrons. Some bars have entertainment on a stage, such as a live band, comedians, go-go...
, closed circuited monitors and leather upholstery. Averaging over 650 square feet (60.4 m²), the suites are the largest in the country for this type of facility. All the activity was generated by over 50 subcontractors and 2.3 million man hours without a single injury.

During the 2011-2012 offseason, the BankAtlantic Center replaced the original green seats with new red seats.

The arena is home to the Florida Panthers
Florida Panthers
The Florida Panthers are a professional ice hockey team based in Sunrise, Florida, in the Miami metropolitan area. They are members of the Southeast Division of the Eastern Conference of the National Hockey League . They play their games at the BankAtlantic Center in Sunrise and are the...
of the NHL
National Hockey League
The National Hockey League is an unincorporated not-for-profit association which operates a major professional ice hockey league of 30 franchised member clubs, of which 7 are currently located in Canada and 23 in the United States...
and formerly the Florida Pit Bulls of the ABA
American Basketball Association (21st century)
The American Basketball Association, often abbreviated as ABA, is a semi-professional men's basketball league that was founded in 1999. The current ABA has no affiliation with the original American Basketball Association that merged with the National Basketball Association in 1976...
and the Florida Bobcats
Florida Bobcats
The Florida Bobcats are a defunct Arena Football League team. They had been previously known as the Sacramento Attack and the Miami Hooters.-Sacramento Attack :...
of the AFL 1998-2001 along with the only season of the Florida ThunderCats
Florida ThunderCats
The Florida ThunderCats were an indoor soccer club based in Fort Lauderdale, Florida that competed in the National Professional Soccer League. The team folded after one season.-Year-by-year:...
. This arena also serves as the host for the Orange Bowl Basketball Classic held every December in conjunction with the namesake college football game.

The arena has held boxing
Boxing
Boxing, also called pugilism, is a combat sport in which two people fight each other using their fists. Boxing is supervised by a referee over a series of between one to three minute intervals called rounds...
, mixed martial arts
Mixed martial arts
Mixed Martial Arts is a full contact combat sport that allows the use of both striking and grappling techniques, both standing and on the ground, including boxing, wrestling, Brazilian jiu-jitsu, muay Thai, kickboxing, karate, judo and other styles. The roots of modern mixed martial arts can be...
and wrestling
Professional wrestling
Professional wrestling is a mode of spectacle, combining athletics and theatrical performance.Roland Barthes, "The World of Wrestling", Mythologies, 1957 It takes the form of events, held by touring companies, which mimic a title match combat sport...
events such as Bash at the Beach '99, Armageddon '99 and Armageddon 2002
Armageddon (2002)
Armageddon was the third Armageddon professional wrestling pay-per-view event produced by World Wrestling Entertainment . It took place on December 15, 2002 at the Office Depot Center in the Ft...
. It also hosted WWE Monday Night Raw
WWE RAW
WWE Raw ) is a sports entertainment television program for WWE that currently airs on the USA Network in the United States...
on November 19, 2007 which featured the return of Chris Jericho
Chris Jericho
Christopher Keith Irvine , better known by his ring name Chris Jericho, is an inactive Canadian-American professional wrestler, musician, songwriter, radio personality, television host, actor, author, and dancer...
. The arena held EliteXC: Heat
EliteXC: Heat
EliteXC: Heat was a mixed martial arts event held by EliteXC on October 4, 2008 in Sunrise, Florida at the Bank Atlantic Center.It would be the last for the promotion....
featuring the main event of Seth Petruzelli
Seth Petruzelli
Seth Petruzelli is an American mixed martial artist, former kickboxer and entrepreneur. He is infamously known as the first man to defeat Kimbo Slice in mixed martial arts competition, knocking him out in 14 seconds. Seth went to school at the University of Central Florida to study Psychology...
and Kimbo Slice
Kimbo Slice
Kevin Ferguson , better known as Kimbo Slice, is a Bahamian-American boxer, mixed martial artist and occasional actor...
took place on October 4, 2008. On January 2, 2009, WWE Raw
WWE RAW
WWE Raw ) is a sports entertainment television program for WWE that currently airs on the USA Network in the United States...
held a live event, in which John Cena defeated Randy Orton to retain the World's Heavyweight title in the main event. On February 15, 2009, a lightweight bout between Nate Campbell
Nate Campbell
Nathaniel Campbell , more commonly known as Nate Campbell, is an American retired professional boxer. He is a former unified WBA, IBF and WBO lightweight champion.-Amateur career:...
and Ali Funeka took place in the arena.

The Professional Bull Riders brought their Built Ford Tough Series
Built Ford Tough Series
The Built Ford Tough Series is the "major league" tour of the PBR competitions. It is a 30-city event series culminating in the PBR World Finals every year in Las Vegas, Nevada. The top 45 riders of the PBR compete in the BFTS with the rankings determined by points and money won...
tour to the BankAtlantic Center in September 2005 for a bull riding
Bull riding
Bull riding refers to rodeo sports that involve a rider getting on a large bull and attempting to stay mounted while the animal attempts to buck off the rider....
event, which was won by Kody Lostroh (who ultimately became the Rookie of the Year that same year).