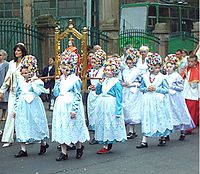 Bambrzy are Poles
Poles
thumb|right|180px|The state flag of [[Poland]] as used by Polish government and diplomatic authoritiesThe Polish people, or Poles , are a nation indigenous to Poland. They are united by the Polish language, which belongs to the historical Lechitic subgroup of West Slavic languages of Central Europe...
who are partly descended from Germans who moved from the area of Bamberg
Bamberg
Bamberg is a city in Bavaria, Germany. It is located in Upper Franconia on the river Regnitz, close to its confluence with the river Main. Bamberg is one of the few cities in Germany that was not destroyed by World War II bombings because of a nearby Artillery Factory that prevented planes from...
(Upper Franconia
Upper Franconia
Upper Franconia is a Regierungsbezirk of the state of Bavaria, southern Germany. It forms part of the historically significant region of Franconia , all now part of the German Federal State of Bayern .With more than 200 independent breweries which brew...
, Germany
Germany
Germany , officially the Federal Republic of Germany , is a federal parliamentary republic in Europe. The country consists of 16 states while the capital and largest city is Berlin. Germany covers an area of 357,021 km2 and has a largely temperate seasonal climate...
) to villages surrounding Poznań
Poznan
Poznań is a city on the Warta river in west-central Poland, with a population of 556,022 in June 2009. It is among the oldest cities in Poland, and was one of the most important centres in the early Polish state, whose first rulers were buried at Poznań's cathedral. It is sometimes claimed to be...
, Poland
Poland
Poland , officially the Republic of Poland , is a country in Central Europe bordered by Germany to the west; the Czech Republic and Slovakia to the south; Ukraine, Belarus and Lithuania to the east; and the Baltic Sea and Kaliningrad Oblast, a Russian exclave, to the north...
. They settled in villages which had been destroyed during the Great Northern War
Great Northern War
The Great Northern War was a conflict in which a coalition led by the Tsardom of Russia successfully contested the supremacy of the Swedish Empire in northern Central Europe and Eastern Europe. The initial leaders of the anti-Swedish alliance were Peter I the Great of Russia, Frederick IV of...
and the subsequent epidemic
Epidemic
In epidemiology, an epidemic , occurs when new cases of a certain disease, in a given human population, and during a given period, substantially exceed what is expected based on recent experience...
of cholera
Cholera
Cholera is an infection of the small intestine that is caused by the bacterium Vibrio cholerae. The main symptoms are profuse watery diarrhea and vomiting. Transmission occurs primarily by drinking or eating water or food that has been contaminated by the diarrhea of an infected person or the feces...
, including: 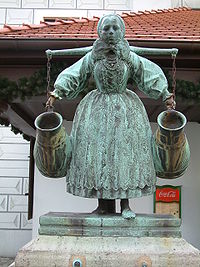 The condition for settlement was, according to the order of King August II of 1710, all newly-arrived foreign settlers in Polish-Lithuanian Commonwealth
Polish-Lithuanian Commonwealth
The Polish–Lithuanian Commonwealth was a dualistic state of Poland and Lithuania ruled by a common monarch. It was the largest and one of the most populous countries of 16th- and 17th‑century Europe with some and a multi-ethnic population of 11 million at its peak in the early 17th century...
had to be Catholic
Catholic
The word catholic comes from the Greek phrase , meaning "on the whole," "according to the whole" or "in general", and is a combination of the Greek words meaning "about" and meaning "whole"...
. At least 450 to 500 men and women came to Poland according to surviving contracts, however, later documents suggest this number may have been as high as 900 people in four waves of immigration.

The Polonisation of this group was a voluntary act and happened very quickly. The settlers refused to build their own churches, prayed with Poles, and their children learned the Polish language
Polish language
Polish is a language of the Lechitic subgroup of West Slavic languages, used throughout Poland and by Polish minorities in other countries...
. There were also many mixed marriages with Poles living there. At the end of the 19th century, during the Kulturkampf
Kulturkampf
The German term refers to German policies in relation to secularity and the influence of the Roman Catholic Church, enacted from 1871 to 1878 by the Prime Minister of Prussia, Otto von Bismarck. The Kulturkampf did not extend to the other German states such as Bavaria...
period, all Catholics in villages inhabited by Bambrzy chose Polish nationality during Prussian
Kingdom of Prussia
The Kingdom of Prussia was a German kingdom from 1701 to 1918. Until the defeat of Germany in World War I, it comprised almost two-thirds of the area of the German Empire...
and German
German Empire
The German Empire refers to Germany during the "Second Reich" period from the unification of Germany and proclamation of Wilhelm I as German Emperor on 18 January 1871, to 1918, when it became a federal republic after defeat in World War I and the abdication of the Emperor, Wilhelm II.The German...
census
Census
A census is the procedure of systematically acquiring and recording information about the members of a given population. It is a regularly occurring and official count of a particular population. The term is used mostly in connection with national population and housing censuses; other common...
es. In the late 19th century, the meaning of the word "Bamber" (singular form) became wider - it started to denote all people living in those villages, regardless of their ethnic or cultural background.

The advent of democracy in Poland in 1989 saw the beginning of a renaissance of the Bamber culture. The best-known aspect of this culture are the rich female dresses.