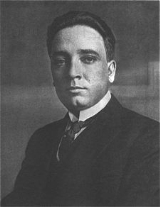 Brum subsequently served as Foreign Minister under the Presidency of Feliciano Viera
Feliciano Viera
Feliciano Alberto Viera Borges was a Uruguayan political figure.-Background:He was a member of the Colorado Party and closely identified with the liberal former President José Batlle y Ordóñez, who long dominated Uruguayan political life...
; in the latter capacity, Brum was noted for promoting good relations with the United States
United States
The United States of America is a federal constitutional republic comprising fifty states and a federal district...
, which had joined World War I against Germany
Germany
Germany , officially the Federal Republic of Germany , is a federal parliamentary republic in Europe. The country consists of 16 states while the capital and largest city is Berlin. Germany covers an area of 357,021 km2 and has a largely temperate seasonal climate...
in 1917.

Brum thus came to Presidential office in 1919 as one with a reputation as a pro-American facilitator of US interests.

During Brum's Presidency, he was noted for pursuing economic stability, but on the political front faced significant opposition from both his own Colorado
Colorado
Colorado is a U.S. state that encompasses much of the Rocky Mountains as well as the northeastern portion of the Colorado Plateau and the western edge of the Great Plains...
Party, and notably from Luis Alberto de Herrera
Luis Alberto de Herrera
Luis Alberto de Herrera was a Uruguayan lawyer and politician.-Political and diplomatic roles:A National leader of great importance during the first half of the 20th century; he led the National Party through the most decisive instances along five decades...
of the Blanco
Blanco
Blanco is an adjective often used in surnames.It may refer to:-General:*Eduardo Blanco , multiple people with the name*Francisco Manuel Blanco, botanist*Griselda Blanco, United States drug lord...
, or National
National Party (Uruguay)
The National Party , also known as the White Party , is a major right-wing conservative political party in Uruguay, currently the major opposition party to the ruling Frente Amplio government....
, Party.

Beyond the strictly political, Baltasar Brum was noted for interests in Uruguayan history and folklore. During his Presidential term of office he took measures with a view to preserving and protecting the historic Fort of Santa Teresa
Santa Teresa
Santa Teresa may refer to:a person:* Saint Teresa of Ávila* Saint Teresa of the Andesplaces:* Santa Teresa, Santa Fe in Argentina* Santa Teresa, Northern Territory in Australia* Santa Teresa, Espírito Santo in Brazil...
in the Rocha Department
Rocha Department
Rocha is a department in the east of Uruguay. It has natural beauties like Cabo Polonio, Valizas, Santa Teresa. Rocha is well known for its beach towns which swell during the summer holidays...
and after leaving office Brum collaborated in the preparation of related literature .

On March 31, 1933, on the installation of President Gabriel Terra
Gabriel Terra
Dr. Gabriel Terra Leivas was the President of Uruguay from 1931 to 1938.- Background :Born in Montevideo to a wealthy family, he graduated from the University of Uruguay in 1895, and subsequently joined the faculty....
's rule by decree, Brum attempted to lead resistance to Terra's government. After having increasingly realized during the course of that day that Terra's authoritarian rule enjoyed at least tacit support by many Uruguayans, Brum hurried into the middle of a road in Montevideo
Montevideo
Montevideo is the largest city, the capital, and the chief port of Uruguay. The settlement was established in 1726 by Bruno Mauricio de Zabala, as a strategic move amidst a Spanish-Portuguese dispute over the platine region, and as a counter to the Portuguese colony at Colonia del Sacramento...
, was heard to shout "viva la libertad! viva Batlle!" (long live liberty! long live Batlle!), and committed suicide by gunshot. He was aged 49 at the time of his death.

To some observers, Brum represented a self-sacrificing romantic streak within Uruguayan politics at a time when many Uruguayans were prepared tacitly to accept extrajudicial changes brought in by Terra. To others, Brum's spectacular suicide suggested the presence of elements of mental instability, which, however, was not medically proven.