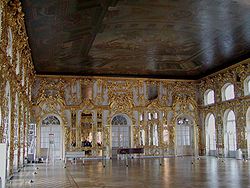 A ballroom is a large room inside a building
Building
In architecture, construction, engineering, real estate development and technology the word building may refer to one of the following:...
, the designated purpose of which is holding formal dances called ball
Ball (dance)
A ball is a formal dance. The word 'ball' is derived from the Latin word "ballare", meaning 'to dance'; the term also derived into "bailar", which is the Spanish and Portuguese word for dance . In Catalan it is the same word, 'ball', for the dance event.Attendees wear evening attire, which is...
s. Traditionally, most balls were held in private residences; many mansion
Mansion
A mansion is a very large dwelling house. U.S. real estate brokers define a mansion as a dwelling of over . A traditional European mansion was defined as a house which contained a ballroom and tens of bedrooms...
s contain one or more ballrooms. In other large houses, a large room such as the main drawing room
Drawing room
A drawing room is a room in a house where visitors may be entertained. The name is derived from the sixteenth-century terms "withdrawing room" and "withdrawing chamber", which remained in use through the seventeenth century, and made its first written appearance in 1642...
, long gallery
Long gallery
Long gallery is an architectural term given to a long, narrow room, often with a high ceiling. In British architecture, long galleries were popular in Elizabethan and Jacobean houses. They were often located on the upper floor of the great houses of the time, and stretched across the entire...
, or hall may double as a ballroom, but a good ballroom should have the right type of flooring
Flooring
Flooring is the general term for a permanent covering of a floor, or for the work of installing such a floor covering. Floor covering is a term to generically describe any finish material applied over a floor structure to provide a walking surface...
, such as hardwood flooring or stone flooring (usually marble).

Ballrooms are generally quite large, and may have ceiling
Ceiling
A ceiling is an overhead interior surface that covers the upper limit of a room. It is generally not a structural element, but a finished surface concealing the underside of the floor or roof structure above....
s higher than other rooms in the same building. The large amount of space for dancing, as well as the highly formal tone of events have given rise to ballroom dancing. The largest balls are now nearly always held in public buildings, and many hotel
Hotel
A hotel is an establishment that provides paid lodging on a short-term basis. The provision of basic accommodation, in times past, consisting only of a room with a bed, a cupboard, a small table and a washstand has largely been replaced by rooms with modern facilities, including en-suite bathrooms...
s have a ballroom. They are also designed large to help the sound of orchestras carry well throughout the whole room.

A special case is the annual Vienna Opera Ball
Vienna Opera Ball
The Vienna Opera Ball is an annual Austrian society event which takes place in the building of the Vienna State Opera on the Thursday preceding Ash Wednesday. Together with the New Year Concert, the Opera Ball is one of the highlights of the Viennese carnival season...
, where, just for one night, the auditorium
Auditorium
An auditorium is a room built to enable an audience to hear and watch performances at venues such as theatres. For movie theaters, the number of auditoriums is expressed as the number of screens.- Etymology :...
of the Vienna State Opera
Vienna State Opera
The Vienna State Opera is an opera house – and opera company – with a history dating back to the mid-19th century. It is located in the centre of Vienna, Austria. It was originally called the Vienna Court Opera . In 1920, with the replacement of the Habsburg Monarchy by the First Austrian...
is turned into a large ballroom. On the eve of the event, the rows of seats are removed from the stalls
Stall (enclosure)
A stall is a small enclosure of some kind, usually less enclosed than a room.-Market stall:A market stall is usually an immobile temporary structure erected by merchants to display and shelter their merchandise...
, and a new floor, level with the stage
Stage (theatre)
In theatre or performance arts, the stage is a designated space for the performance productions. The stage serves as a space for actors or performers and a focal point for the members of the audience...
, is built. 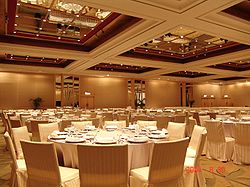