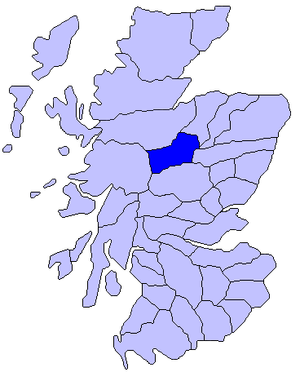 For Badenoch, Ontario, see that article.

Badenoch (from the Scottish Gaelic Bàideanach meaning drowned land) is a traditional district which today forms part of Badenoch and Strathspey
Badenoch and Strathspey
Badenoch and Strathspey as a local government district 1975 to 1996Badenoch and Strathspey is a local government ward of the Highland council area and a ward management area of the Highland Council in Scotland...
, an area of Highland Council, in Scotland
Scotland
Scotland is a country that is part of the United Kingdom. Occupying the northern third of the island of Great Britain, it shares a border with England to the south and is bounded by the North Sea to the east, the Atlantic Ocean to the north and west, and the North Channel and Irish Sea to the...
, bounded on the north by the Monadhliath Mountains
Monadhliath Mountains
The Monadhliath Mountains, or Monadh Liath , are a range of mountains in Scotland. The name derives from Scottish Gaelic, and means "grey mountains". Running in a northeast to southwest direction, the mountains lie on the western side of Strathspey, to the west of the Cairngorms and to the south...
, on the east by the Cairngorms and Braemar
Braemar
Braemar is a village in Aberdeenshire, Scotland, around west of Aberdeen in the Highlands. It is the closest significantly-sized settlement to the upper course of the River Dee sitting at an altitude of ....
, on the south by Atholl
Atholl
Atholl or Athole is a large historical division in the Scottish Highlands. Today it forms the northern part of Perth and Kinross, Scotland bordering Marr, Badenoch, Breadalbane, Strathearn, Perth and Lochaber....
and the Grampians
Grampian Mountains (Scotland)
The Grampian Mountains or Grampians are one of the three major mountain ranges in Scotland, occupying a considerable portion of the Scottish Highlands in northeast Scotland.-Extent:...
, and on the west by Lochaber
Lochaber
District of Lochaber 1975 to 1996Highland council area shown as one of the council areas of ScotlandLochaber is one of the 16 ward management areas of the Highland Council of Scotland and one of eight former local government districts of the two-tier Highland region...
. The capital of Badenoch is Kingussie
Kingussie
Kingussie is a small town in the Highland region of Scotland. It is one settlement in the Highland Council ward of Badenoch and Strathspey, and is the capital of the district of Badenoch. It lies beside the A9 road, although the old route of the A9 serves as the town's main street...
.

The somewhat undefined area of Badenoch covers 36 miles (57.9 km) from northeast to southwest and 15 miles (24.1 km) from north to south, comprising 540 square miles (1,398.6 km²). Excepting the strath
Strath
A strath is a large valley, typically a river valley that is wide and shallow .An anglicisation of the Gaelic word srath, it is one of many that have been absorbed into common use in the English language...
of the Spey and the great glen
Glen
A glen is a valley, typically one that is long, deep, and often glacially U-shaped; or one with a watercourse running through such a valley. Whittow defines it as a "Scottish term for a deep valley in the Highlands" that is "narrower than a strath."...
s, it consists almost entirely of wild mountainous country, many hills exceeding 3000 feet (914.4 m) in height, and contains in the forests of Alder, Drumochter, Gaick and Feshie some of the best deer country in the Highlands
Scottish Highlands
The Highlands is an historic region of Scotland. The area is sometimes referred to as the "Scottish Highlands". It was culturally distinguishable from the Lowlands from the later Middle Ages into the modern period, when Lowland Scots replaced Scottish Gaelic throughout most of the Lowlands...
.

The principal lochs in Badenoch are Loch Laggan
Loch Laggan
Loch Laggan is a freshwater loch situated east of Fort William, in Lochaber, Highland, Scotland. The A86 road from Spean Bridge to Kingussie follows along its north bank...
, Loch Insh and Loch Ericht
Loch Ericht
Loch Ericht is a freshwater loch on the border between Perth and Kinross and the Highlands Council areas of Scotland. It is situated at a height of 351 metres above sea level and has a north-east to south-west orientation. The village of Dalwhinnie lies at the north east end of the loch...
, and the River Spey
River Spey
The River Spey is a river in the northeast of Scotland, the second longest and the fastest-flowing river in Scotland...
and its numerous tributaries water the district abundantly. The Highland railway traverses Badenoch from Dalnaspidal to Boat of Garten
Boat of Garten
Boat of Garten is a small village and post town in Badenoch and Strathspey, Highland, Scotland. In 1951, the population was less than 400; in 1971, it was almost 500; in 1981, it was almost 700, and the same in 2001.-Etymology:...
.

From 1229 to 1313 Clan Comyn held the lordship of Badenoch. In 1371 King Robert II
Robert II of Scotland
Robert II became King of Scots in 1371 as the first monarch of the House of Stewart. He was the son of Walter Stewart, hereditary High Steward of Scotland and of Marjorie Bruce, daughter of Robert I and of his first wife Isabella of Mar...
granted it to his son Alexander Stewart, 1st earl of Buchan
Alexander Stewart, 1st Earl of Buchan
Alexander Stewart, Earl of Buchan, Alasdair Mór mac an Rígh, and called the Wolf of Badenoch , was the third surviving son of King Robert II of Scotland and youngest by his first wife, Elizabeth Mure of Rowallan. He was the first Earl of Buchan since John Comyn, from 1382 until his death...
(1343–1405), the "Wolf of Badenoch". Reverting to the crown, the territory came in 1452 to Alexander Gordon, 1st Earl of Huntly
Alexander Gordon, 1st Earl of Huntly
Alexander Seton , 1st Earl of Huntly was a powerful 15th century Scottish magnate. He was knighted in 1439/40 and was Lord of Badenoch, & Cluny....
, and still gives the title of "Lord of Badenoch" to the marquess of Huntly
Marquess of Huntly
Marquess of Huntly is a title in the Peerage of Scotland created on 17 April 1599 for George Gordon, 6th Earl of Huntly. It is the oldest existing marquessate in Scotland, and the second-oldest in the British Isles, only the English marquessate of Winchester being older...
.

The area has very few industries, and population groups itself at Kingussie
Kingussie
Kingussie is a small town in the Highland region of Scotland. It is one settlement in the Highland Council ward of Badenoch and Strathspey, and is the capital of the district of Badenoch. It lies beside the A9 road, although the old route of the A9 serves as the town's main street...
and at other places on or near the Spey.
The source of this article is wikipedia, the free encyclopedia.  The text of this article is licensed under the GFDL.