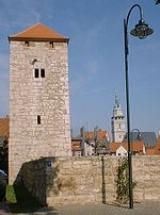 Encyclopedia
Bad Langensalza is a city in the County of Unstrut-Hainich
Unstrut-Hainich
Unstrut-Hainich is a Kreis in the north of Thuringia, Germany. Neighboring districts are the districts Eichsfeld, Kyffhäuserkreis, Sömmerda, Gotha, Wartburgkreis and the district Werra-Meißner in Hesse.-History:...
, Thuringia
Thuringia
The Free State of Thuringia is a state of Germany, located in the central part of the country.It has an area of and 2.29 million inhabitants, making it the sixth smallest by area and the fifth smallest by population of Germany's sixteen states....
, Germany
Germany
Germany , officially the Federal Republic of Germany , is a federal parliamentary republic in Europe. The country consists of 16 states while the capital and largest city is Berlin. Germany covers an area of 357,021 km2 and has a largely temperate seasonal climate...
, with a population of c. 18,500 (2006).

It was first mentioned in historical records ca. 932, as a village named "Salzaha". The city name was changed to Langensalza ca. 1578, and "Bad" or "Bath" was added to the city name in 1956.

In 1075, Langensalza was the site of a battle, in which Emperor Henry IV
Henry IV, Holy Roman Emperor
Henry IV was King of the Romans from 1056 and Holy Roman Emperor from 1084 until his forced abdication in 1105. He was the third emperor of the Salian dynasty and one of the most powerful and important figures of the 11th century...
won over the rebelling Saxons
Saxons
The Saxons were a confederation of Germanic tribes originating on the North German plain. The Saxons earliest known area of settlement is Northern Albingia, an area approximately that of modern Holstein...
and Thuringians.

War again affected the city during 1756-1763, during the Seven Years' War
Seven Years' War
The Seven Years' War was a global military war between 1756 and 1763, involving most of the great powers of the time and affecting Europe, North America, Central America, the West African coast, India, and the Philippines...
; it was the scene of a battle
Battle of Langensalza (1761)
The Battle of Langensalza was an engagement between French forces and allied Prussian and Hanoverian forces during the Seven Years' War. It was fought near Langensalza in what is now eastern Germany, but was then in the Kingdom of Prussia. An allied advance surprised the French, resulting in the...
in February 1761. In 1815 Langensalza became part of the Prussian
Kingdom of Prussia
The Kingdom of Prussia was a German kingdom from 1701 to 1918. Until the defeat of Germany in World War I, it comprised almost two-thirds of the area of the German Empire...
Province of Saxony
Province of Saxony
The Province of Saxony was a province of the Kingdom of Prussia and later the Free State of Prussia from 1816 until 1945. Its capital was Magdeburg.-History:The province was created in 1816 out of the following territories:...
. In 1866 it was again the site of a battle between Prussia and Hanover
Kingdom of Hanover
The Kingdom of Hanover was established in October 1814 by the Congress of Vienna, with the restoration of George III to his Hanoverian territories after the Napoleonic era. It succeeded the former Electorate of Brunswick-Lüneburg , and joined with 38 other sovereign states in the German...
during the Austro-Prussian War
Austro-Prussian War
The Austro-Prussian War was a war fought in 1866 between the German Confederation under the leadership of the Austrian Empire and its German allies on one side and the Kingdom of Prussia with its German allies and Italy on the...
.

American troops occupied the city in 1945.

Langensalza is something of a tourist spot, with picturesque ruins of a medieval castle
Castle
A castle is a type of fortified structure built in Europe and the Middle East during the Middle Ages by European nobility. Scholars debate the scope of the word castle, but usually consider it to be the private fortified residence of a lord or noble...
, and sulphur baths nearby.

Bad Langensalza is twinned
Town twinning
Twin towns and sister cities are two of many terms used to describe the cooperative agreements between towns, cities, and even counties in geographically and politically distinct areas to promote cultural and commercial ties.- Terminology :...
with: Oostkamp
Oostkamp
Oostkamp is a municipality located in the Belgian province of West Flanders. The municipality comprises the villages of Hertsberge, Oostkamp proper, Ruddervoorde and Waardamme. On January 1, 2006 Oostkamp had a total population of 21,796...
, Belgium
Belgium
Belgium , officially the Kingdom of Belgium, is a federal state in Western Europe. It is a founding member of the European Union and hosts the EU's headquarters, and those of several other major international organisations such as NATO.Belgium is also a member of, or affiliated to, many...
Bad Nauheim
Bad Nauheim
Bad Nauheim is a town in the Wetteraukreis district of Hesse state of Germany. , Bad Nauheim has a population of 30,365. The town is located approximately 35 kilometers north of Frankfurt am Main, on the east edge of the Taunus mountain range. It is a world-famous resort, noted for its salt...
, Germany
Germany
Germany , officially the Federal Republic of Germany , is a federal parliamentary republic in Europe. The country consists of 16 states while the capital and largest city is Berlin. Germany covers an area of 357,021 km2 and has a largely temperate seasonal climate...