Encyclopedia
The BTR-D is a Soviet airborne multi-purpose tracked armoured personnel carrier
Armoured personnel carrier
An armoured personnel carrier is an armoured fighting vehicle designed to transport infantry to the battlefield.APCs are usually armed with only a machine gun although variants carry recoilless rifles, anti-tank guided missiles , or mortars...
which was introduced in 1974 and first seen by the West in 1979 during the Soviet war in Afghanistan
Soviet war in Afghanistan
The Soviet war in Afghanistan was a nine-year conflict involving the Soviet Union, supporting the Marxist-Leninist government of the Democratic Republic of Afghanistan against the Afghan Mujahideen and foreign "Arab–Afghan" volunteers...
. BTR-D stands for Bronetransportyor Desanta (БТР, Бронетранспортер Десанта, literally "armoured transporter of the Airborne"). It is based on BMD-1
BMD-1
The BMD-1 is a Soviet airborne amphibious tracked infantry fighting vehicle, which was introduced in 1969 and first seen by the West in 1970. BMD stands for Boyevaya Mashina Desanta . It can be dropped by parachute and although it resembles the BMP-1 it is in fact much smaller...
airborne IFV. NATO gave it the designation BMD M1979.

In 1969 the BMD-1 airborne IFV entered service with the Soviet Army
Soviet Army
The Soviet Army is the name given to the main part of the Armed Forces of the Soviet Union between 1946 and 1992. Previously, it had been known as the Red Army. Informally, Армия referred to all the MOD armed forces, except, in some cases, the Soviet Navy.This article covers the Soviet Ground...
. The vehicle had many flaws, but the biggest was the fact the troop compartment was extremely cramped
and could only transport up to four infantrymen; in fact this number was often shortened to three because it was impractical for four infantrymen to operate inside the troop compartment
and dismount the vehicle. Because of that in the beginning of 1970s the design bureau of Volgograd Tractor Plant which designed the BMD-1 began designing an airborne APC based on
BMD-1. The prototype was ready in 1974 and in the same year after it passed the trials it entered production and service with the Soviet Army as the BTR-D.

BTR-D is based on BMD-1 however it's 60 mm longer and its turret is removed. A small flat superstructure with a hatch on top of it is in place of the turret.

The crew consists of the driver, the commander and the left bow mounted machine gun gunner who are in the same positions and have the same equipment like in the BMD-1.

Although the turret with all of the main armament was removed, the two bow mounted machine guns have been retained. However the original PKT tank machine guns have been replaced by PKB general purpose machine guns. The vehicle can also be fitted with pintle-mounted automatic grenade launchers (AGS-17
AGS-17
The AGS-17 Plamya is a Soviet-designed automatic grenade launcher currently in production in the Russian Federation and in service worldwide.-Description:...
, AGS-30 or AGS-57) and/or machine guns (PKM, 6P41, "Utyos" or "Kord").

The BTR-D is powered by the same engine as the BMD-1 however its suspension is longer because the entire vehicle has been lengthened by 60 mm. Because of this the vehicle has six
roadwheels on each side instead of five. It also has five return rollers on each side unlike the BMD-1 which has four.

The armour protection is slightly better on the BTR-D than on the BMD-1. That's because the upper front armour has a dual slanted angle. Also its armour is made out of aluminium which proved to be much better than the armour on the BMD-1 which was made out of cast magnesium alloy and caught fire and burned fiercely, often killing the crew if hit with a weapon such as an RPG.

Because the turret has been removed the troop compartment has been enlarged and can carry up to ten fully equipped soldiers. It's also linked with the crew compartment in the front.
Also there are two firing ports in the sides and one in the rear, two of which are for RPK-74 light machine gun.

BTR-D has all the same equipment as the BMD-1 but also has towing equipment for ZU-23-2 twin AA autocannon.

As of now BTR-D and vehicles based on it are used by the following units of Russian Army or are stationed in following bases:

51stairborne regiment from Tula (32 BTR-D, 6 BTR-RD , 13 BTR-ZD , 2 BMD-1KSh and 1 BMD-1R)
137th airborne regiment from Ryazan
Ryazan
Ryazan is a city and the administrative center of Ryazan Oblast, Russia. It is located on the Oka River southeast of Moscow. Population: The strategic bomber base Dyagilevo is just west of the city, and the air base of Alexandrovo is to the southeast as is the Ryazan Turlatovo Airport...
(38 BTR-D, 6 BTR-RD , 13 BTR-ZD , 7 BMD-1KSh and 1 BMD-1R)
1182nd artillery regiment from Yefremov
Yefremov (town)
Yefremov is a town and the administrative center of Yefremovsky District of Tula Oblast, Russia, located on the Krasivaya Mecha River , south of Tula. Population:...
(4 BTR-D, 3 BTR-ZD , 2 BMD-1KSh and 18 2S9 Anona)
107th independent air defense division from Donskoy
Donskoy
Donskoy , Donskaya , or Donskoye may refer to:People*Alexander Donskoy , mayor of Arkhangelsk, Russia*Boris Donskoy , Russian revolutionary...
(18 BTR-D, 6 BTR-ZD and 1 BMD-1KSh)
332nd independent engineer battalion from Tula (8 BTR-D and 1 BMD-1KSh)
731st independent commandos battalion from Tula (2 BTR-D, 6 BMD-1KSh, 5 BMD-1R and 2 R-440-ODB )
15th independent repair battalion from Tula (4 BTR-D and 1 BREM-D). 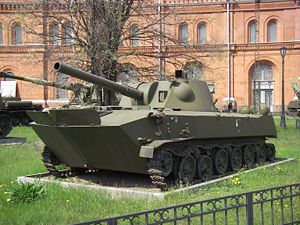