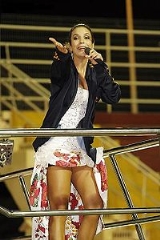 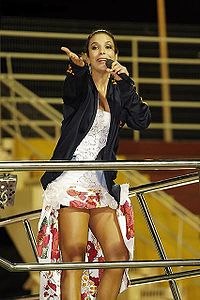 Axé is a popular
Popular music
Popular music belongs to any of a number of musical genres "having wide appeal" and is typically distributed to large audiences through the music industry. It stands in contrast to both art music and traditional music, which are typically disseminated academically or orally to smaller, local...
music genre
Music genre
A music genre is a categorical and typological construct that identifies musical sounds as belonging to a particular category and type of music that can be distinguished from other types of music...
originating in Salvador
Salvador, Bahia
Salvador is the largest city on the northeast coast of Brazil and the capital of the Northeastern Brazilian state of Bahia. Salvador is also known as Brazil's capital of happiness due to its easygoing population and countless popular outdoor parties, including its street carnival. The first...
, Bahia
Bahia
Bahia is one of the 26 states of Brazil, and is located in the northeastern part of the country on the Atlantic coast. It is the fourth most populous Brazilian state after São Paulo, Minas Gerais and Rio de Janeiro, and the fifth-largest in size...
, Brazil
Brazil
Brazil , officially the Federative Republic of Brazil , is the largest country in South America. It is the world's fifth largest country, both by geographical area and by population with over 192 million people...
approximately in 1986, fusing different Afro-Caribbean genres, such as Marcha, Reggae
Reggae
Reggae is a music genre first developed in Jamaica in the late 1960s. While sometimes used in a broader sense to refer to most types of Jamaican music, the term reggae more properly denotes a particular music style that originated following on the development of ska and rocksteady.Reggae is based...
, and Calypso
Calypso music
Calypso is a style of Afro-Caribbean music that originated in Trinidad and Tobago from African and European roots. The roots of the genre lay in the arrival of enslaved Africans, who, not being allowed to speak with each other, communicated through song...
. It also includes influences of Afro-Brazilian music such as Frevo
Frevo
Frevo is a wide range of musical styles originating from Recife, Pernambuco, Brazil, all of which are traditionally associated with Brazilian Carnival. The word frevo is said to come from frever, a misspeaking of the Portuguese word ferver . It is said that the sound of the frevo will make...
, Forró
Forró
Forró is a kind of Northeastern Brazilian dance as well as a word used to denote the different genres of music which accompanies the dance. Both are much in evidence during the annual Festa Junina , a part of Brazilian traditional culture which celebrates some Catholic saints...
and Carixada. The most important creator of this music style was Alfredo Moura, conducting Carlinhos Brown
Carlinhos Brown
Carlinhos Brown is a Brazilian musician from Salvador, Bahia. He was born in Candeal Pequeno, a small neighbourhood in the Brotas area of Salvador de Bahia...
, Luiz Caldas, Sarajane and others. The word "axé
Ashe
Ashe may refer to:*Ashé, the energy of creation in Yoruba mythology*Ashé, primordial stroke which is life force, in the Shambhala teachings of Chogyam Trungpa*In computing, ASHE is the shortened form for A Simple HTML editor...
" comes from a Yoruba religious greeting used in the Candomblé
Candomblé
Candomblé is an African-originated or Afro-Brazilian religion, practised chiefly in Brazil by the "povo de santo" . It originated in the cities of Salvador, the capital of Bahia and Cachoeira, at the time one of the main commercial crossroads for the distribution of products and slave trade to...
and Umbanda
Umbanda
Umbanda is an Afro-Brazilian religion that blends African religions with Catholicism, Spiritism and Kardecism, and considerable indigenous lore....
religions that means "soul", "light", "spirit" or "good vibration".


Origin of the term Axé

The term "axé" began as an insult, intended to point out the perceived pretentiousness of the genre. It was applied vaguely, however, and anything recorded in Salvador was soon nicknamed "axé".

When Daniela Mercury
Daniela Mercury
Daniela Mercury , is a Latin Grammy Award-winning Brazilian axé, samba-reggae and MPB singer, songwriter and record producer. Since her breakthrough, Mercury has become one of the best known Brazilian female singers, selling over 20 million albums worldwide...
released O Canto da Cidade
O Canto da Cidade
O Canto da Cidade is the second album by Brazilian axé/MPB singer Daniela Mercury, released in 1992 in Brazil and on March 23, 1993 in North America and Europe through Sony Music....
in 1992, axé entered the mainstream pop music scene and became one of the most popular genres in Brazil. Two years before, the American
United States
The United States of America is a federal constitutional republic comprising fifty states and a federal district...
and Europe
Europe
Europe is, by convention, one of the world's seven continents. Comprising the westernmost peninsula of Eurasia, Europe is generally 'divided' from Asia to its east by the watershed divides of the Ural and Caucasus Mountains, the Ural River, the Caspian and Black Seas, and the waterways connecting...
an release of Margareth Menezes
Margareth Menezes
Margareth Menezes is a Brazilian singer from Salvador, Bahia.Her style is considered axé but her music also steers into samba and MPB territory, at times drawing on African rhythms and reggae....
' Elegibô took the style to international audiences.

The root of axé is in guitarra baiana, a 1950s guitar style that used electric guitar
Electric guitar
An electric guitar is a guitar that uses the principle of direct electromagnetic induction to convert vibrations of its metal strings into electric audio signals. The signal generated by an electric guitar is too weak to drive a loudspeaker, so it is amplified before sending it to a loudspeaker...
s to play the frevo
Frevo
Frevo is a wide range of musical styles originating from Recife, Pernambuco, Brazil, all of which are traditionally associated with Brazilian Carnival. The word frevo is said to come from frever, a misspeaking of the Portuguese word ferver . It is said that the sound of the frevo will make...
from Pernambuco
Pernambuco
Pernambuco is a state of Brazil, located in the Northeast region of the country. To the north are the states of Paraíba and Ceará, to the west is Piauí, to the south are Alagoas and Bahia, and to the east is the Atlantic Ocean. There are about of beaches, some of the most beautiful in the...
. This genre was purely instrumental, and remained so until the 1970s, when Moraes Moreira (of the band Novos Baianos
Novos Baianos
Novos Baianos was a Brazilian rock and MPB group from Salvador, Bahia. It was formed in the 1960s and enjoyed success throughout most of the 1970s. The band members were Paulinho Boca de Cantor , Pepeu Gomes , Moraes Moreira , Baby Consuelo and Luiz Galvão...
) went solo.

Axé was officially labeled after Luiz Caldas released his album Magia in 1985 and got super popular after Daniela Mercury
Daniela Mercury
Daniela Mercury , is a Latin Grammy Award-winning Brazilian axé, samba-reggae and MPB singer, songwriter and record producer. Since her breakthrough, Mercury has become one of the best known Brazilian female singers, selling over 20 million albums worldwide...
became a big hit with her album so called "O Canto da Cidade".

Though axé was very popular through the 1990s, it had famous detractors like Dorival Caymmi
Dorival Caymmi
Dorival Caymmi was a Brazilian singer, songwriter, actor, and painter active for more than 70 years beginning in 1933...
. On the other hand, Caetano Veloso
Caetano Veloso
Caetano Emanuel Viana Teles Veloso , better known as Caetano Veloso, is a Brazilian composer, singer, guitarist, writer, and political activist. Veloso first became known for his participation in the Brazilian musical movement Tropicalismo which encompassed theatre, poetry and music in the 1960s,...
supported it.

Currently, the biggest axé music stars are Ivete Sangalo
Ivete Sangalo
Ivete Maria Dias de Sangalo is a Latin Grammy Award-winning Brazilian Axé and MPB singer, songwriter, and occasional actress and television show host...
and Cláudia Leitte
Cláudia Leitte
Cláudia Cristina Leite Inácio, known as Claudia Leitte is a Brazilian axé singer, and former vocalist of the group Babado Novo. Since she is one of the most popular axé singers in Brazil, she hosted MTV Brasil's Video Music Brasil 2007, in which she had been nominated as best singer in that award...
.