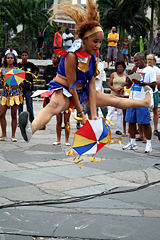 Frevo is a wide range of musical styles originating from Recife
Recife
Recife is the fifth-largest metropolitan area in Brazil with 4,136,506 inhabitants, the largest metropolitan area of the North/Northeast Regions, the 5th-largest metropolitan influence area in Brazil, and the capital and largest city of the state of Pernambuco. The population of the city proper...
, Pernambuco
Pernambuco
Pernambuco is a state of Brazil, located in the Northeast region of the country. To the north are the states of Paraíba and Ceará, to the west is Piauí, to the south are Alagoas and Bahia, and to the east is the Atlantic Ocean. There are about of beaches, some of the most beautiful in the...
, Brazil
Brazil
Brazil , officially the Federative Republic of Brazil , is the largest country in South America. It is the world's fifth largest country, both by geographical area and by population with over 192 million people...
, all of which are traditionally associated with Brazilian Carnival
Brazilian Carnival
The Carnival of Brazil is an annual festival held forty-six days before Easter. On certain days of Lent, Roman Catholics and some other Christians traditionally abstained from the consumption of meat and poultry, hence the term "carnival," from carnelevare, "to remove meat." Carnival celebrations...
. The word frevo is said to come from frever, a misspeaking of the Portuguese
Portuguese language
Portuguese is a Romance language that arose in the medieval Kingdom of Galicia, nowadays Galicia and Northern Portugal. The southern part of the Kingdom of Galicia became independent as the County of Portugal in 1095...
word ferver (to boil). It is said that the sound of the frevo will make listeners and dancers to feel as they are boiling on the ground. The word frevo is normally used interchangeably either to mean the frevo music or the frevo dance.

The frevo music came first. By the end of century XIX, bands from the Brazilian Army regiments based in the city of Recife started a tradition of parading during the Carnival. Since the Carnival
Carnival
Carnaval is a festive season which occurs immediately before Lent; the main events are usually during February. Carnaval typically involves a public celebration or parade combining some elements of a circus, mask and public street party...
is originally linked to religion, they played religious procession
Procession
A procession is an organized body of people advancing in a formal or ceremonial manner.-Procession elements:...
marches and martial music, as well. A couple of regiments had famous bands which attracted lots of followers and it was just a matter of time to people start to compare one to another and cheer for their favorite bands. The two most famous bands were the Espanha (meaning Spain), whose conductor was from Spanish origin) and the 14, from the 14th regiment. The bands started to compete with each other and also started playing faster and faster, louder and louder.

Some tough men used to go ahead of the band, opening space to its parade by bullying people on the streets and threatening them with capoeira
Capoeira
Capoeira is a Brazilian art form that combines elements of martial arts, sports, and music. It was created in Brazil mainly by descendants of African slaves with Brazilian native influences, probably beginning in the 16th century...
(Afro-Brazilian martial art) and knives. Eventually, when the bands met each other in the streets, fights between the capoeiristas were inevitable. These fights normally ended up with many wounded and even dead.

In order to end with this violence wave, the Police started to pursue the capoeiras and arrested many during their exhibitions. They reacted in an clever way by carrying umbrellas instead of knives and also disguising the capoeira movements as dance movements. The frevo dance was born.


Evolution of the Frevo

Frevo is as of now more than 100 years old (1907) and naturally it has been evolved during all this time to reach its current form. This evolution happened in many aspects that are detailed in the following.


Evolution of the dance

In the same spirit of competition that made it to be born, the Frevo dance was developed by transforming the capoeira movements into the quasi-acrobatical movements of the Frevo dance. Each dancer worked hard in order to develop a new movement which required much rehearsal, strength, endurance and flexibility and the fight between the groups moved from the physical to the aesthetical field. Frevo dance movements include jumps, coordinated fast leg movements, leg flexions, etc.

Frevo dance is now known as passo and Frevo dancers as passistas. The clothes of the passistas also developed from regular clothing to an attire that is more appropriate to the movements. They are also very colorful, so they can be more visible in the crowd.

The umbrella also developed from regular black umbrellas with wooden handles to a small and also colorful umbrella. Umbrella movements are part of the dance and doing acrobatics with them is a common practice. It's not uncommon to see passistas throwing umbrellas in the air, do some movement, and catch them again. They also pass the umbrellas between their legs. The most common movement is just swinging the umbrella and passing it from hand to hand while executing regular movements.

The image of the passista is one of the most prominent icons of the carnival
Carnival
Carnaval is a festive season which occurs immediately before Lent; the main events are usually during February. Carnaval typically involves a public celebration or parade combining some elements of a circus, mask and public street party...
of Pernambuco
Pernambuco
Pernambuco is a state of Brazil, located in the Northeast region of the country. To the north are the states of Paraíba and Ceará, to the west is Piauí, to the south are Alagoas and Bahia, and to the east is the Atlantic Ocean. There are about of beaches, some of the most beautiful in the...
.

American pop-star, Cyndi Lauper, is dancing the Frevo when she sings her song, "Maybe He'll Know".

Frevo-de-Rua (Street Frevo), the most common meaning of the word "frevo", is an instrumental style, played in a fiery fast tempo with brass instrument
Brass instrument
A brass instrument is a musical instrument whose sound is produced by sympathetic vibration of air in a tubular resonator in sympathy with the vibration of the player's lips...
s, namely trumpet
Trumpet
The trumpet is the musical instrument with the highest register in the brass family. Trumpets are among the oldest musical instruments, dating back to at least 1500 BCE. They are played by blowing air through closed lips, producing a "buzzing" sound which starts a standing wave vibration in the air...
s, trombone
Trombone
The trombone is a musical instrument in the brass family. Like all brass instruments, sound is produced when the player’s vibrating lips cause the air column inside the instrument to vibrate...
s, saxophone
Saxophone
The saxophone is a conical-bore transposing musical instrument that is a member of the woodwind family. Saxophones are usually made of brass and played with a single-reed mouthpiece similar to that of the clarinet. The saxophone was invented by the Belgian instrument maker Adolphe Sax in 1846...
s and tuba
Tuba
The tuba is the largest and lowest-pitched brass instrument. Sound is produced by vibrating or "buzzing" the lips into a large cupped mouthpiece. It is one of the most recent additions to the modern symphony orchestra, first appearing in the mid-19th century, when it largely replaced the...
. It is frequently perceived by American ears as resembling Polka
Polka
The polka is a Central European dance and also a genre of dance music familiar throughout Europe and the Americas. It originated in the middle of the 19th century in Bohemia...
.

Frevo-de-Rua bands can often be found playing during football
Football (soccer)
Association football, more commonly known as football or soccer, is a sport played between two teams of eleven players with a spherical ball...
matches in Recife, forming a sort of pep band
Pep band
A pep band is an ensemble of instrumentalists who play at functions or events with the purpose of entertaining and "pepping" up a crowd. Often members of a pep band are a subset of people from a larger ensemble such as a marching band or a concert band. Pep bands are generally associated with...
. A well-known Frevo-de-Rua tune is called "Vassourinhas". A famous conductor in this style is Mestre Duda.

Adaptation of frevo compositions for smaller formations, commonly without a brass section and made up by Bahian-guitars, drums, bass, electric guitars and a singer. The style developed in the early 50s in Bahia, spurred by a performance given by the "Clube Carnvalesco Misto Vassourinhas of Olinda" in Salvador (Bahia State), and later by the band Trio Elétrico Armandinho, Dodô & Osmar, gave origin to the trio eléctrico tradition of the Bahian carnival.