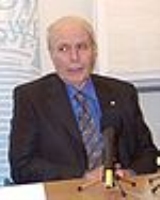 Encyclopedia
Avram Hershko (born 31 December 1937) is a Hungarian
Hungarian
Hungarian may refer to:* Hungary, a country in Central Europe* Kingdom of Hungary, state of Hungary, existing from 1000 to 1946* Hungarian people, the ethnic group primarily associated with Hungary...
-Israel
Israel
The State of Israel is a parliamentary republic located in the Middle East, along the eastern shore of the Mediterranean Sea...
i biochemist
Biology
Biology is a natural science concerned with the study of life and living organisms, including their structure, function, growth, origin, evolution, distribution, and taxonomy. Biology is a vast subject containing many subdivisions, topics, and disciplines...
and Nobel laureate in Chemistry
Chemistry
Chemistry is the science of matter, especially its chemical reactions, but also its composition, structure and properties. Chemistry is concerned with atoms and their interactions with other atoms, and particularly with the properties of chemical bonds....
.

Born Herskó Ferenc in Karcag
Karcag
Karcag is a large town in Jász-Nagykun-Szolnok county, in the Northern Great Plain region of central Hungary.Karcag has its own railway station, but InterCity trains do not stop here...
, Hungary, Hershko emigrated to Israel in 1950. Received his M.D. in 1965 and his Ph.D in 1969 from the Hebrew University-Hadassah Medical School, Jerusalem, Israel. He is currently a Distinguished Professor at the Rappaport Faculty of Medicine at the Technion in Haifa
Haifa
Haifa is the largest city in northern Israel, and the third-largest city in the country, with a population of over 268,000. Another 300,000 people live in towns directly adjacent to the city including the cities of the Krayot, as well as, Tirat Carmel, Daliyat al-Karmel and Nesher...
.

Along with Aaron Ciechanover
Aaron Ciechanover
Aaron Ciechanover is an Israeli biologist, and Nobel laureate in Chemistry.- Biography :Ciechanover was born in Haifa, British mandate of Palestine, a year before the establishment of the State of Israel...
and Irwin Rose
Irwin Rose
Irwin A. Rose is an American biologist. Along with Aaron Ciechanover and Avram Hershko, he was awarded the 2004 Nobel Prize in Chemistry for the discovery of ubiquitin-mediated protein degradation.-Biography:...
, he was awarded the 2004 Nobel Prize in Chemistry
Nobel Prize in Chemistry
The Nobel Prize in Chemistry is awarded annually by the Royal Swedish Academy of Sciences to scientists in the various fields of chemistry. It is one of the five Nobel Prizes established by the will of Alfred Nobel in 1895, awarded for outstanding contributions in chemistry, physics, literature,...
for the discovery of ubiquitin
Ubiquitin
Ubiquitin is a small regulatory protein that has been found in almost all tissues of eukaryotic organisms. Among other functions, it directs protein recycling.Ubiquitin can be attached to proteins and label them for destruction...
-mediated protein degradation. The ubiquitin-proteasome pathway has a critical role in maintaining the homeostasis of cells and is believed to be involved in the development and progression of diseases such as: cancer, muscular and neurological diseases, immune and inflammatory responses.

In 2005, he was voted the co-31st-greatest Israeli of all time, in a poll by the Israeli news website Ynet
Ynet
Ynet is the most popular Israeli news and general content website. It is owned by the same conglomerate that operates Yediot Ahronot, the country's secondleading daily newspaper...
to determine whom the general public considered the 200 Greatest Israelis. Hershko's work and reception of the Nobel Prize is cited as a historic milestone in the unique history of the Technion - Israel Institute of Technology.

Professor Hershko serves on the Scientific Advisory Board of Oramed Pharmaceuticals.