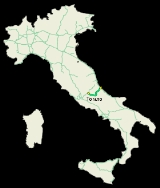 Encyclopedia
The Autostrada A25 Roma–Pescara is a motorway
Autostrade of Italy
The Autostrada is the Italian national system of motorways. The total length of the system is about 6,400 km. In North and Central Italy this is mainly as tollways, with the biggest portion in concession to the Atlantia group which operates some 3,408 km...
which allows travel from Rome
Rome
Rome is the capital of Italy and the country's largest and most populated city and comune, with over 2.7 million residents in . The city is located in the central-western portion of the Italian Peninsula, on the Tiber River within the Lazio region of Italy.Rome's history spans two and a half...
to Pescara
Pescara
Pescara is the capital city of the Province of Pescara, in the Abruzzo region of Italy. As of January 1, 2007 it was the most populated city within Abruzzo at 123,059 residents, 400,000 with the surrounding metropolitan area...
in Italy
Italy
Italy , officially the Italian Republic languages]] under the European Charter for Regional or Minority Languages. In each of these, Italy's official name is as follows:;;;;;;;;), is a unitary parliamentary republic in South-Central Europe. To the north it borders France, Switzerland, Austria and...
. Along with the A24
Autostrada A24 (Italy)
The Autostrada A24, or Autostrada dei Parchi , is a motorway connecting Rome to the Adriatic Sea. Commencing at the Grande Raccordo Anulare , the A24 runs broadly north-east past L'Aquila and through a 10km tunnel under the Gran Sasso before reaching Teramo.First planned in 1973 to connect Lazio...
it is also named the Autostrada dei Parchi (“Motorway of the Parks”). It runs through beautiful scenery from the A24 near Torano, past the Fucine Lake
Fucine Lake
The Fucine Lake was a large lake in central Italy, stretching from Avezzano in the northwest to Ortuccio in the southeast, and touching Trasacco in the southwest. It was drained in 1875.-Roman drainage:...
and Avezzano
Avezzano
Avezzano is a town and comune in the Abruzzo region, province of L'Aquila. It is the main commercial, industrial and agricultural centre of the Marsica area, with high-tech industries such as a Micron Technology semi-conductor plant, and a large Telespazio satellite farm.-History:There are two...
, through the Appennines and the valley of the river Aterno before joining the A14 after the Chieti
Chieti
Chieti is a city and comune in Central Italy, 200 km northeast of Rome. It is the capital of the Province of Chieti in the Abruzzo region...
exit. The A24 is 114 km in length with service stations, around 80 km apart, near each end.

This route like the A24
Autostrada A24 (Italy)
The Autostrada A24, or Autostrada dei Parchi , is a motorway connecting Rome to the Adriatic Sea. Commencing at the Grande Raccordo Anulare , the A24 runs broadly north-east past L'Aquila and through a 10km tunnel under the Gran Sasso before reaching Teramo.First planned in 1973 to connect Lazio...
is currently managed by the Strada dei Parchi S.p.A..