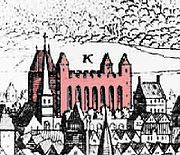 The Basilica of Constantine , or Aula Palatina, at Trier
Trier
Trier, historically called in English Treves is a city in Germany on the banks of the Moselle. It is the oldest city in Germany, founded in or before 16 BC....
, Germany
Germany
Germany , officially the Federal Republic of Germany , is a federal parliamentary republic in Europe. The country consists of 16 states while the capital and largest city is Berlin. Germany covers an area of 357,021 km2 and has a largely temperate seasonal climate...
is a Roman
Roman Empire
The Roman Empire was the post-Republican period of the ancient Roman civilization, characterised by an autocratic form of government and large territorial holdings in Europe and around the Mediterranean....
palace basilica
Basilica
The Latin word basilica , was originally used to describe a Roman public building, usually located in the forum of a Roman town. Public basilicas began to appear in Hellenistic cities in the 2nd century BC.The term was also applied to buildings used for religious purposes...
that was built by the emperor Constantine
Constantine I
Constantine the Great , also known as Constantine I or Saint Constantine, was Roman Emperor from 306 to 337. Well known for being the first Roman emperor to convert to Christianity, Constantine and co-Emperor Licinius issued the Edict of Milan in 313, which proclaimed religious tolerance of all...
(306–337 AD) at the beginning of the 4th century.

Today it is owned and used as church by a congregation within the Evangelical Church in the Rhineland
Evangelical Church in the Rhineland
Evangelical Church in the Rhineland is a united Protestant church body in parts of the German states of North Rhine-Westphalia, Rhineland-Palatinate, Saarland and Hesse . This is actually the area covered by the former Prussian Rhine Province until 1920. It is the most important Protestant...
. The basilica contains the largest extant hall
Hall
In architecture, a hall is fundamentally a relatively large space enclosed by a roof and walls. In the Iron Age, a mead hall was such a simple building and was the residence of a lord and his retainers...
from antiquity (see List of ancient roofs) ranked a World Heritage Site
World Heritage Site
A UNESCO World Heritage Site is a place that is listed by the UNESCO as of special cultural or physical significance...
. The room has a length of 67 m, a width of 26.05 m and a height of 33 m.

The Aula Palatina was built around 310
310
Year 310 was a common year starting on Sunday of the Julian calendar. At the time, it was known as the Year of the Consulship of Andronicus and Probus...
AD as a part of the palace
Palace
A palace is a grand residence, especially a royal residence or the home of a head of state or some other high-ranking dignitary, such as a bishop or archbishop. The word itself is derived from the Latin name Palātium, for Palatine Hill, one of the seven hills in Rome. In many parts of Europe, the...
complex. Originally it was not a free standing building, but had other smaller buildings (such as a forehall, an entrance vestibule
Vestibule (architecture)
A vestibule is a lobby, entrance hall, or passage between the entrance and the interior of a building.The same term can apply to structures in modern or ancient roman architecture. In modern architecture vestibule typically refers to a small room or hall between an entrance and the interior of...
and some service buildings) attached to it. The Aula Palatina was equipped with a floor and wall heating system (hypocaust
Hypocaust
A hypocaust was an ancient Roman system of underfloor heating, used to heat houses with hot air. The word derives from the Ancient Greek hypo meaning "under" and caust-, meaning "burnt"...
).

During the Middle Ages
Middle Ages
The Middle Ages is a periodization of European history from the 5th century to the 15th century. The Middle Ages follows the fall of the Western Roman Empire in 476 and precedes the Early Modern Era. It is the middle period of a three-period division of Western history: Classic, Medieval and Modern...
, it was used as the residence for the bishop
Bishop (Catholic Church)
In the Catholic Church, a bishop is an ordained minister who holds the fullness of the sacrament of Holy Orders and is responsible for teaching the Catholic faith and ruling the Church....
of Trier. For that, the apse
Apse
In architecture, the apse is a semicircular recess covered with a hemispherical vault or semi-dome...
was redesigned into living quarters and pinnacles were added to the top of its walls. In the 17th century, the archbishop
Archbishop
An archbishop is a bishop of higher rank, but not of higher sacramental order above that of the three orders of deacon, priest , and bishop...
Lothar von Metternich constructed his palace just next to the Aula Palatina and incorporating it into his palace some major redesign was done. Later in the 19th century, Frederick William IV of Prussia
Frederick William IV of Prussia
|align=right|Upon his accession, he toned down the reactionary policies enacted by his father, easing press censorship and promising to enact a constitution at some point, but he refused to enact a popular legislative assembly, preferring to work with the aristocracy through "united committees" of...
ordered the building to be restored to its original Roman state, which was done under the supervision of the military architect
Architect
An architect is a person trained in the planning, design and oversight of the construction of buildings. To practice architecture means to offer or render services in connection with the design and construction of a building, or group of buildings and the space within the site surrounding the...
Carl Schnitzler. In 1856, the Aula Palatina became a Protestant church. In 1944, the building burned due to an air raid
Strategic bombing
Strategic bombing is a military strategy used in a total war with the goal of defeating an enemy nation-state by destroying its economic ability and public will to wage war rather than destroying its land or naval forces...
of the allied forces
Allies of World War II
The Allies of World War II were the countries that opposed the Axis powers during the Second World War . Former Axis states contributing to the Allied victory are not considered Allied states...
during World War II
World War II
World War II, or the Second World War , was a global conflict lasting from 1939 to 1945, involving most of the world's nations—including all of the great powers—eventually forming two opposing military alliances: the Allies and the Axis...
. When it was repaired after the war, the historical inner decorations from the 19th century were not reconstructed, so that the brick walls are visible from the inside as well.