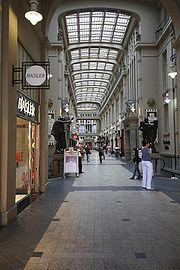 Auerbachs Keller is the best known and second oldest restaurant in Leipzig
Leipzig
Leipzig Leipzig has always been a trade city, situated during the time of the Holy Roman Empire at the intersection of the Via Regia and Via Imperii, two important trade routes. At one time, Leipzig was one of the major European centres of learning and culture in fields such as music and publishing...
. It was described in Johann Wolfgang von Goethe's
Johann Wolfgang von Goethe
Johann Wolfgang von Goethe was a German writer, pictorial artist, biologist, theoretical physicist, and polymath. He is considered the supreme genius of modern German literature. His works span the fields of poetry, drama, prose, philosophy, and science. His Faust has been called the greatest long...
play Faust I, as the first place Mephistopheles
Mephistopheles
Mephistopheles is a demon featured in German folklore...
takes Faust on their travels.

Auerbach's Cellar is located below the Mädlerpassage, a shopping arcade, at Grimmaische Straße 2 in Leipzig's historical district near the market. It has four historical dining rooms; the Fasskeller (Barrel Cellar), Lutherzimmer (Luther Room), Goethezimmer (Goethe Room), Alt-Leipzig (Old Leipzig), and since 1913 the Großer Keller (Large Cellar). There is also the Mephisto Bar on the floor above available for drinks.

The restaurant owes much of its fame to Goethe, who frequented Auerbach's Cellar as a student and called it his favorite wine bar. According to legend, the alchemist
Alchemy
Alchemy is an influential philosophical tradition whose early practitioners’ claims to profound powers were known from antiquity. The defining objectives of alchemy are varied; these include the creation of the fabled philosopher's stone possessing powers including the capability of turning base...
Dr. Johann Georg Faust
Johann Georg Faust
Dr. Johann Georg Faust , also known in English as John Faustus , was an itinerant alchemist, astrologer, and magician of the German Renaissance...
once rode a wine barrel from the cellar to the street at Auerbach's Cellar, something he could have accomplished only with the help of the Devil
Devil
The Devil is believed in many religions and cultures to be a powerful, supernatural entity that is the personification of evil and the enemy of God and humankind. The nature of the role varies greatly...
. This legend is most likely what led Goethe to add the scene in Auerbach's Cellar to his play Faust I.

The wine bar was first mentioned in a historical record dated 1438. Its present name comes from the original owner, the Leipzig city councilor, professor of medicine and rector of Leipzig University Dr. Heinrich Stromer, who was familiarly called Dr. Auerbach after his birthplace, the town of Auerbach
Auerbach in der Oberpfalz
Auerbach in der Oberpfalz is a town in the Amberg-Sulzbach district, Bavaria, Germany. It is located 45 km NE of Nuremberg. In Michelfeld there was a Benedictine monastery which is now a nursing home.-Districts:*Degelsdorf*Gunzendorf*Michelfeld...
in Germany's Upper Palatinate
Upper Palatinate
The Upper Palatinate is one of the seven administrative regions of Bavaria, Germany, located in the east of Bavaria.- History :The region took its name first in the early 16th century, because it was by the Treaty of Pavia one of the main portions of the territory of the Wittelsbach Elector...
region. He was the personal physician of the Prince-Elector of Saxony, who gave him the right to establish the wine bar in gratitude for faithful services.

Although it was one of the city’s most important wine bars already in the 16th century, its worldwide popularity is primarily due to Johann Wolfgang von Goethe. Goethe often visited Auerbach’s Cellar while studying in Leipzig 1765-1768, and saw there two paintings on wood dating from 1625, one depicting the magician and astrologer Faust
Faust
Faust is the protagonist of a classic German legend; a highly successful scholar, but also dissatisfied with his life, and so makes a deal with the devil, exchanging his soul for unlimited knowledge and worldly pleasures. Faust's tale is the basis for many literary, artistic, cinematic, and musical...
drinking with students and the other showing him riding out the door astride a wine barrel. Goethe was already familiar with the Faust legend from his youth, since a puppet show Dr. Faust, was frequently performed at local street fairs. The scene Auerbach’s Cellar in Leipzig in his drama Faust I is his literary memorial to his student tavern and to the city, albeit an ironic one. 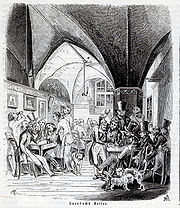 Between 1912 and 1913 much of Auerbach’s Cellar was reconstructed and expanded as part of the demolition of the medieval construction above it and the erection of the Mädlerpassage. It was reopened on 22 February 1913, which is also the date when the two sculptures Mephisto and Faust and Bewitched Students were placed at the entrance of the wine bar. These were cast by Traugott Noack (1865–1941) at his Bronze Fine Art Foundry Noack, which he established in 1899.