Encyclopedia
Atlasov Island, known in Russian
Russian language
Russian is a Slavic language used primarily in Russia, Belarus, Uzbekistan, Kazakhstan, Tajikistan and Kyrgyzstan. It is an unofficial but widely spoken language in Ukraine, Moldova, Latvia, Turkmenistan and Estonia and, to a lesser extent, the other countries that were once constituent republics...
as Ostrov Atlasova (Остров Атласова), or in Japanese
Japanese language
is a language spoken by over 130 million people in Japan and in Japanese emigrant communities. It is a member of the Japonic language family, which has a number of proposed relationships with other languages, none of which has gained wide acceptance among historical linguists .Japanese is an...
as Araido (阿頼度島), is the northernmost island and volcano and also the highest volcano of the Kuril islands
Kuril Islands
The Kuril Islands , in Russia's Sakhalin Oblast region, form a volcanic archipelago that stretches approximately northeast from Hokkaidō, Japan, to Kamchatka, Russia, separating the Sea of Okhotsk from the North Pacific Ocean. There are 56 islands and many more minor rocks. It consists of Greater...
, part of the Sakhalin Oblast
Sakhalin Oblast
Sakhalin Oblast is a federal subject of Russia comprising the island of Sakhalin and the Kuril Islands.The oblast has an area of 87,100 km² and a population of 546,695...
in Russia
Russia
Russia or , officially known as both Russia and the Russian Federation , is a country in northern Eurasia. It is a federal semi-presidential republic, comprising 83 federal subjects...
. The Russian name is sometimes rendered in English as Atlasova Island. Other names for the island include Uyakhuzhach, Oyakoba and Alaid, the name of the volcano on the island.

The island is named after Vladimir Atlasov
Vladimir Atlasov
Vladimir Vasilyevich Atlasov or Otlasov was a Siberian Cossack who was the first Russian to explore the Kamchatka Peninsula. Atlasov Island, an uninhabited volcanic island off the southern tip of Kamchatka, is named after him....
, a 17th century Russian explorer who incorporated the nearby Kamchatka Peninsula
Kamchatka Peninsula
The Kamchatka Peninsula is a peninsula in the Russian Far East, with an area of . It lies between the Pacific Ocean to the east and the Sea of Okhotsk to the west...
into Russia. It is essentially the cone of a submarine volcano called Vulkan Alaid protruding above the Sea of Okhotsk
Sea of Okhotsk
The Sea of Okhotsk is a marginal sea of the western Pacific Ocean, lying between the Kamchatka Peninsula on the east, the Kuril Islands on the southeast, the island of Hokkaidō to the far south, the island of Sakhalin along the west, and a long stretch of eastern Siberian coast along the west and...
to a height of 2,339 m (7,672 ft). The island has an area of 119 km² (46 sq mi), but is currently uninhabited.Numerous pyroclastic cones dot the lower flanks of basalt
Basalt
Basalt is a common extrusive volcanic rock. It is usually grey to black and fine-grained due to rapid cooling of lava at the surface of a planet. It may be porphyritic containing larger crystals in a fine matrix, or vesicular, or frothy scoria. Unweathered basalt is black or grey...
ic to basaltic andesite
Basaltic andesite
Basaltic andesite is a black volcanic rock containing about 55% silica. Minerals in basaltic andesite include olivine, augite and plagioclase. Basaltic andesite can be found in volcanoes around the world, including in Central America and the Andes of South America. Basaltic andesite is common in...
volcano, particularly on the NW and SE sides, including an offshore cone formed during the 1933-34 eruption. 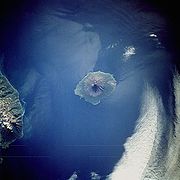 Its near perfect shape gave rise to many legends about the volcano among the peoples of the region, such as the Itelmens
Itelmens
The Itelmen, sometimes known as Kamchadal, are an ethnic group who are the original inhabitants living on the Kamchatka Peninsula in Russia. The Itelmen language is distantly related to Chukchi and Koryak, forming the Chukotko-Kamchatkan language family, but it is now virtually extinct, the vast...
and Kuril Ainu
Ainu people
The , also called Aynu, Aino , and in historical texts Ezo , are indigenous people or groups in Japan and Russia. Historically they spoke the Ainu language and related varieties and lived in Hokkaidō, the Kuril Islands, and much of Sakhalin...
. The Russian scientist Stepan Krasheninnikov
Stepan Krasheninnikov
Stepan Petrovich Krasheninnikov was a Russian explorer of Siberia, naturalist and geographer who gave the first full description of Kamchatka in the early 18th century. He was elected to the Russian Academy of Sciences in 1745...
was told the story that it was once a mountain in Kamchatka, but the neighbouring mountains became jealous of its beauty and exiled it to the sea, leaving behind Lake Kurile in southern Kamchatka. Geographically, this story is not without evidence, as after the last Ice Age most of the icecaps melted, raising the world's water level, and possibly submerging a landbridge to the volcano.

Ito Osamu (1926) described it as more exquisitely shaped than Mount Fuji
Mount Fuji
is the highest mountain in Japan at . An active stratovolcano that last erupted in 1707–08, Mount Fuji lies about south-west of Tokyo, and can be seen from there on a clear day. Mount Fuji's exceptionally symmetrical cone is a well-known symbol of Japan and it is frequently depicted in art and...
.