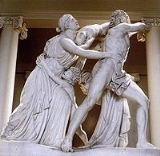 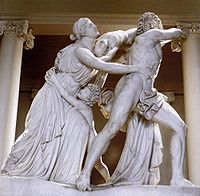 The king of Orchomenus in Greek mythology
Greek mythology
Greek mythology is the body of myths and legends belonging to the ancient Greeks, concerning their gods and heroes, the nature of the world, and the origins and significance of their own cult and ritual practices. They were a part of religion in ancient Greece...
, Athamas , was married first to the goddess Nephele
Nephele
In Greek mythology, Nephele was a cloud nymph who figured prominently in the story of Phrixus and Helle.Greek myth also has it that Nephele is the cloud whom Zeus created in the image of Hera to trick Ixion to test his integrity after displaying his lust for Hera during a feast as a guest of Zeus...
with whom he had the twins Phrixus
Phrixus
In Greek mythology, Phrixus or Frixos or Phryxus was the son of Athamas, king of Boiotia, and Nephele . His twin sister Helle and he were hated by their stepmother, Ino. Ino hatched a devious plot to get rid of the twins, roasting all of Boeotia's crop seeds so they would not grow. The local...
or Frixos and Helle
Helle (mythology)
Helle was a character in Greek mythology who figured prominently in the story of Jason and the Argonauts. Phrixus, son of Athamas and Nephele, along with his twin sister, Helle, were hated by their stepmother, Ino. Ino hatched a devious plot to get rid of the twins, roasting all the town's crop...
. He later divorced Nephele and married Ino
Ino (Greek mythology)
In Greek mythology Ino was a mortal queen of Thebes, who after her death and transfiguration was worshiped as a goddess under her epithet Leucothea, the "white goddess." Alcman called her "Queen of the Sea" , which, if not hyperbole, would make her a doublet of Amphitrite.In her mortal self, Ino,...
, daughter of Cadmus
Cadmus
Cadmus or Kadmos , in Greek mythology was a Phoenician prince, the son of king Agenor and queen Telephassa of Tyre and the brother of Phoenix, Cilix and Europa. He was originally sent by his royal parents to seek out and escort his sister Europa back to Tyre after she was abducted from the shores...
. With Ino, he had two children: Learches and Melicertes
Melicertes
In Greek mythology, Melicertes is the son of the Boeotian prince Athamas and Ino, daughter of Cadmus....
. Athamas also had a brother, Salmoneus
Salmoneus
In Greek mythology, Salmoneus was the son of Aeolus and Enarete, the brother of Athamas, Sisyphus, Cretheus, Perieres, Deionus, Canace, Alcyone, and Perimede. Salmoneus was the father of Tyro by his first wife Alcidice, the second one being Sidero....
, who was the father of Tyro
Tyro
In Greek mythology, Tyro was the daughter of Salmoneus and married Cretheus, but loved Enipeus. She gave birth to Pelias and Neleus, the twin sons of Poseidon. With Cretheus she had Aeson, Pheres, and Amythaon....
.

Later, Ino raised Dionysus
Dionysus
Dionysus was the god of the grape harvest, winemaking and wine, of ritual madness and ecstasy in Greek mythology. His name in Linear B tablets shows he was worshipped from c. 1500—1100 BC by Mycenean Greeks: other traces of Dionysian-type cult have been found in ancient Minoan Crete...
, her nephew, son of her sister Semele
Semele
Semele , in Greek mythology, daughter of the Boeotian hero Cadmus and Harmonia, was the mortal mother of Dionysus by Zeus in one of his many origin myths. In another version of his mythic origin, he is the son of Persephone...
, causing Hera
Hera
Hera was the wife and one of three sisters of Zeus in the Olympian pantheon of Greek mythology and religion. Her chief function was as the goddess of women and marriage. Her counterpart in the religion of ancient Rome was Juno. The cow and the peacock were sacred to her...
's intense jealousy. In vengeance, Hera struck Athamas with insanity. Athamas went mad and slew one of his sons, Learchus
Learchus
Learchus or Learches is a figure in Greek mythology and was the son of Athamas and Ino as well as the brother of Melicertes.-Mythology:The story of Learchus is part of the Theban Cycle which was elaborated by Ovid in his Metamorphoses...
; Ino, to escape the pursuit of her frenzied husband, threw herself into the sea with her son Melicertes
Melicertes
In Greek mythology, Melicertes is the son of the Boeotian prince Athamas and Ino, daughter of Cadmus....
. Both were afterwards worshipped as marine divinities, Ino as Leucothea
Leucothea
In Greek mythology, Leucothea , "white goddess") was one of the aspects under which an ancient sea goddess was recognized, in this case as a transformed nymph....
, Melicertes as Palaemon
Palaemon
Palaemon may refer to:In Greek mythology:*Palaemon, epithet of Heracles*Palaemon, son of Heracles by either Autonoe or Iphinoe*Palaemon, the name that Melicertes received upon deification...
.

Athamas, with the guilt of his son's murder upon him, was obliged to flee from Boeotia
Boeotia
Boeotia, also spelled Beotia and Bœotia , is one of the regional units of Greece. It is part of the region of Central Greece. It was also a region of ancient Greece. Its capital is Livadeia, the second largest city being Thebes.-Geography:...
. He was ordered by the oracle to settle in a place where he should receive hospitality from wild beasts. This he found at Phthiotis
Phthiotis
Phthiotis is one of the regional units of Greece. It is part of the administrative region of Central Greece. The capital is the city of Lamia. It is bordered by the Malian Gulf to the east, Boeotia in the south, Phocis in the south, Aetolia-Acarnania in the southwest, Evrytania in the west,...
in Thessaly
Thessaly
Thessaly is a traditional geographical region and an administrative region of Greece, comprising most of the ancient region of the same name. Before the Greek Dark Ages, Thessaly was known as Aeolia, and appears thus in Homer's Odyssey....
, where he surprised some wolves eating sheep; on his approach they fled, leaving him the bones. Athamas, regarding this as the fulfilment of the oracle, settled there and married a third wife, Themisto
Themisto
In Greek mythology, Themisto , daughter of Hypseus, was the third and last wife of Athamas. According to Apollodorus, she had five children by him: Leucon, Erythrius, Schoeneus, Ptous, and Porphyrion. In other sources there were but two: Sphincius and Orchomenus, or else Schoeneus and Leucon...
(son: Schoeneus
Schoeneus
In Greek mythology, Schoeneus was the name of several individuals:#Schoeneus was a Boeotian king, the son of Athamas and Themisto. He was the father of Atalanta by Clymene.#Schoeneus was the son of Autonous and Hippodamia...
). The spot was afterwards called the Athamanian plain. When Athamas returned to his second wife, Ino, Themisto sought revenge by dressing her children in white clothing and Ino's in black. Ino switched their clothes without Themisto's knowledge, and she killed her own children.

According to some accounts, Athamas was succeeded on the throne by Presbon. A part of Kingdom of Athamas, and hisself, moved west north and took toots in a part of Pindus mountains in Epirus, called Athamanean mountains. So this population today is called Athamaneans
The source of this article is wikipedia, the free encyclopedia.  The text of this article is licensed under the GFDL.