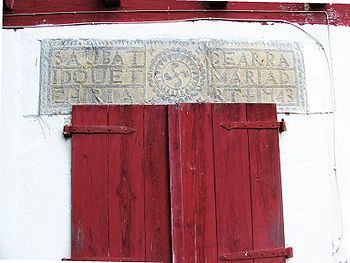 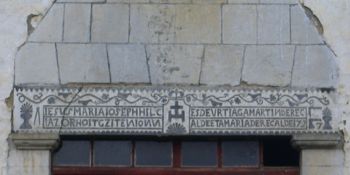 Atalburu is the name given to the lintel above the main entrance of traditional Basque houses
Baserri
A baserri is a traditional type of half-timbered or stone-built farmhouse found in the Basque Country in Northern Spain and Southwestern France. The baserris, with their gently sloping roofs and entrace portals, are highly characteristic of the region and form a vital part in traditional Basque...
.

The text may have religious references, for example:

Traditionally, all Basque houses have a name, but this was seldom written on the atalarri and more commonly found on the armarria. On modern modern houses, the house name is frequently engraved on a stele near the door. Once a house is named, the name is virtually never changed.
The source of this article is wikipedia, the free encyclopedia.  The text of this article is licensed under the GFDL.