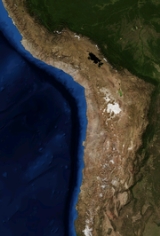 How far is it from louisiana to the atacama desert?
More