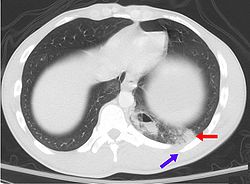 In medicine
Medicine
Medicine is the science and art of healing. It encompasses a variety of health care practices evolved to maintain and restore health by the prevention and treatment of illness....
, a disease is considered asymptomatic if a patient is a carrier for a disease or infection but experiences no symptoms. A condition might be asymptomatic if it fails to show the noticeable symptom
Symptom
A symptom is a departure from normal function or feeling which is noticed by a patient, indicating the presence of disease or abnormality...
s with which it is usually associated. Asymptomatic infections are also called subclinical infection
Subclinical infection
A subclinical infection is the asymptomatic carrying of an by an individual of an agent that usually is a pathogen causing illness, at least in some individuals. Many pathogens spread by being silently carried in this way by some of their host population...
s. The term clinically silent is also used.

Knowing that a condition is asymptomatic is important because:

Asymptomatic conditions may not be discovered until the patient undergoes medical tests (X-ray
X-ray
X-radiation is a form of electromagnetic radiation. X-rays have a wavelength in the range of 0.01 to 10 nanometers, corresponding to frequencies in the range 30 petahertz to 30 exahertz and energies in the range 120 eV to 120 keV. They are shorter in wavelength than UV rays and longer than gamma...
s or other investigations). Some people may remain asymptomatic for a remarkably long period of time; such as people with some forms of cancer
Cancer
Cancer , known medically as a malignant neoplasm, is a large group of different diseases, all involving unregulated cell growth. In cancer, cells divide and grow uncontrollably, forming malignant tumors, and invade nearby parts of the body. The cancer may also spread to more distant parts of the...
. If a patient is asymptomatic, precautionary steps must be taken.

A patient's individual genetic makeup may delay or prevent the onset of symptoms.