Encyclopedia
Asturian is a Romance language of the West Iberian group
West Iberian languages
West Iberian is a branch of the Romance languages which includes Castilian, Ladino, the Astur-Leonese group , and the modern descendants of Galician-Portuguese...
, Astur-Leonese Subgroup, spoken in the Spanish
Spain
Spain , officially the Kingdom of Spain languages]] under the European Charter for Regional or Minority Languages. In each of these, Spain's official name is as follows:;;;;;;), is a country and member state of the European Union located in southwestern Europe on the Iberian Peninsula...
Region of Asturias by the Asturian people
Asturian people
The Asturians are one of the nationalisms of Spain, issuing from the historical country of the Principality of Asturias. They have Celtiberian heritage, related to its historical and cultural links with neighbouring Galicia, as well as Visigothic cultural influences most notably found in the...
. In Asturias
Asturias
The Principality of Asturias is an autonomous community of the Kingdom of Spain, coextensive with the former Kingdom of Asturias in the Middle Ages...
, even though it is not an official language
Official language
An official language is a language that is given a special legal status in a particular country, state, or other jurisdiction. Typically a nation's official language will be the one used in that nation's courts, parliament and administration. However, official status can also be used to give a...
, it is protected under the Autonomous Statute legislation and is an optional language at schools.

The language developed from Vulgar Latin
Vulgar Latin
Vulgar Latin is any of the nonstandard forms of Latin from which the Romance languages developed. Because of its nonstandard nature, it had no official orthography. All written works used Classical Latin, with very few exceptions...
with contributions from the pre-Roman languages, which were spoken in the territory of the Astures, an ancient tribe of the Iberian peninsula. Castilian
Spanish language
Spanish , also known as Castilian , is a Romance language in the Ibero-Romance group that evolved from several languages and dialects in central-northern Iberia around the 9th century and gradually spread with the expansion of the Kingdom of Castile into central and southern Iberia during the...
Spanish came to the area later, in the 14th century, when the central administration sent emissaries and functionaries to occupy political and ecclesiastical offices. Nowadays, Asturian codification of Astur-Leonese spoken in the Asturian Autonomous Community has become a modern language, after the birth of "Academy of the Asturian Language
Academy of the Asturian Language
The Academia de la Llingua Asturiana or Academy of the Asturian Language is an organization that promotes and regulates the Asturian language, a language of the Spanish autonomous community of Asturias. Among its principal objectives are investigating and normalizing the Asturian Language,...
" in 1980. Mirandese is very close to Asturian.

Much effort has been made since 1974 to protect and promote Asturian. In 1994, there were 100,000 first-language speakers, and 450,000 second-language speakers able to speak or understand Asturian. However, the situation of Asturian is critical, with a large decline in the number of speakers in the last 100 years.

At the end of the 20th century, the Academia de la Llingua Asturiana made efforts to provide the language with most of the tools needed by a language to ensure its survival: a grammar
Grammar
In linguistics, grammar is the set of structural rules that govern the composition of clauses, phrases, and words in any given natural language. The term refers also to the study of such rules, and this field includes morphology, syntax, and phonology, often complemented by phonetics, semantics,...
, a dictionary
Dictionary
A dictionary is a collection of words in one or more specific languages, often listed alphabetically, with usage information, definitions, etymologies, phonetics, pronunciations, and other information; or a book of words in one language with their equivalents in another, also known as a lexicon...
, and periodicals. A new generation of Asturian writers have also championed the language. These developments give the Asturian language a greater hope of survival. 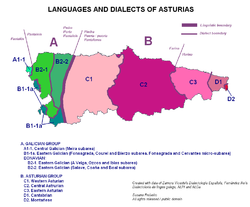 Many internet pages use the Asturian language; the councils pages, the music groups pages and more. In this area, Ubuntu
Ubuntu (operating system)
Ubuntu is a computer operating system based on the Debian Linux distribution and distributed as free and open source software. It is named after the Southern African philosophy of Ubuntu...
has the Asturian language as a normal language in their programs for computers.

Although Spanish
Spanish language
Spanish , also known as Castilian , is a Romance language in the Ibero-Romance group that evolved from several languages and dialects in central-northern Iberia around the 9th century and gradually spread with the expansion of the Kingdom of Castile into central and southern Iberia during the...
(Castellano) is the official language used in all schools in Asturias, children are required to take Asturian Language classes from age 6 to 16. Optional classes are offered from age 16 to 19. Also, with the new Bologna process
Bologna process
The purpose of the Bologna Process is the creation of the European Higher Education Area by making academic degree standards and quality assurance standards more comparable and compatible throughout Europe, in particular under the Lisbon Recognition Convention...
people will be able to study Asturian Philology in the same way as Spanish Philology http://www.suatea.org/Junta_de_personal/Resoluciones/091029_Pleno_ordinario/08%20Minor.pdf, and school-teachers will be able to do a speciality in the Asturian language. But these two possibilities can only be studied in the University of Oviedo (Asturias).


Asturian also has several digraphs, some of which have their own names.
Furthermore, the letter h and the digraph ll can have their sound changed to represent dialectal pronunciation by underdotting the letters: