An astrograph is a telescope designed for the sole purpose of astrophotography
Astrophotography
Astrophotography is a specialized type of photography that entails recording images of astronomical objects and large areas of the night sky. The first photographs of an astronomical object were taken in the 1840s, but it was not until the late 19th century that advances in technology allowed for...
. Astrographs are usually used in wide field surveys of the night sky as well as detection of objects such as asteroids, meteor
METEOR
METEOR is a metric for the evaluation of machine translation output. The metric is based on the harmonic mean of unigram precision and recall, with recall weighted higher than precision...
s, and comet
Comet
A comet is an icy small Solar System body that, when close enough to the Sun, displays a visible coma and sometimes also a tail. These phenomena are both due to the effects of solar radiation and the solar wind upon the nucleus of the comet...
s.

Most research telescopes in this class are refractors
Refracting telescope
A refracting or refractor telescope is a type of optical telescope that uses a lens as its objective to form an image . The refracting telescope design was originally used in spy glasses and astronomical telescopes but is also used for long focus camera lenses...
although there are many (usually larger) reflecting
Reflecting telescope
A reflecting telescope is an optical telescope which uses a single or combination of curved mirrors that reflect light and form an image. The reflecting telescope was invented in the 17th century as an alternative to the refracting telescope which, at that time, was a design that suffered from...
designs such as the Ritchey-Chrétien
Ritchey-Chrétien telescope
A Ritchey–Chrétien telescope is a specialized Cassegrain telescope designed to eliminate coma, thus providing a large field of view compared to a more conventional configuration. An RCT has a hyperbolic primary and a hyperbolic secondary mirror. It was invented in the early 1910s by American...
and catadioptric
Catadioptric
A catadioptric optical system is one where refraction and reflection are combined in an optical system, usually via lenses and curved mirrors . Catadioptric combinations are used in focusing systems such as search lights, headlamps, early lighthouse focusing systems, optical telescopes,...
s such as the Schmidt camera
Schmidt camera
A Schmidt camera, also referred to as the Schmidt telescope, is a catadioptric astrophotographic telescope designed to provide wide fields of view with limited aberrations. Other similar designs are the Wright Camera and Lurie-Houghton telescope....
. The main parameters of an Astrograph are the diameter and f-ratio of the objective
Objective (optics)
In an optical instrument, the objective is the optical element that gathers light from the object being observed and focuses the light rays to produce a real image. Objectives can be single lenses or mirrors, or combinations of several optical elements. They are used in microscopes, telescopes,...
which determine the field of view
Field of view
The field of view is the extent of the observable world that is seen at any given moment....
and image scale on the photographic plate or CCD
Charge-coupled device
A charge-coupled device is a device for the movement of electrical charge, usually from within the device to an area where the charge can be manipulated, for example conversion into a digital value. This is achieved by "shifting" the signals between stages within the device one at a time...
detector. The objective of an astrograph is usually not very large, on the order of 8–20 inches (20–50 cm). 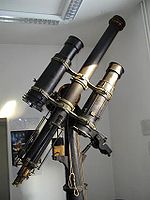 Astrographs used in astrometry
Astrometry
Astrometry is the branch of astronomy that involves precise measurements of the positions and movements of stars and other celestial bodies. The information obtained by astrometric measurements provides information on the kinematics and physical origin of our Solar System and our Galaxy, the Milky...
record images that are then used to “map” the positions of objects over a large area of the sky. These maps are then published in catalogs to be used in further study or to serve as reference points for deep-space imaging.

Astrographs used for stellar classification
Stellar classification
In astronomy, stellar classification is a classification of stars based on their spectral characteristics. The spectral class of a star is a designated class of a star describing the ionization of its chromosphere, what atomic excitations are most prominent in the light, giving an objective measure...
sometimes consist of two identical telescopes on the same mount (a double astrograph). Each sky field can be simultaneously photographed in two colors (usually blue and yellow). Each telescope may have individually designed non-achromatic objective
Non-achromatic objective
A non-achromatic objective is an objective lens which is not corrected for chromatic aberration. In telescopes they can a be pre-18th century simple single element objective lenses which were used before the invention of doublet achromatic lenses...
s to focus the desired wavelength of light which is paired with the respective color-sensitive (black-and-white) photographic plate. In other cases a single telescope is used to make two exposures of the same part of the sky with different filters and color sensitive film used on each exposure. Two-color photography lets astronomers measure the color, as well as the brightness (magnitude), of each star imaged. Colors tell the star's "temperature”. Knowing the color type and magnitudes lets astronomers determine the star’s distances. Sky fields that are photographed twice, decades apart in time, will reveal a nearby star's proper motion
Proper motion
The proper motion of a star is its angular change in position over time as seen from the center of mass of the solar system. It is measured in seconds of arc per year, arcsec/yr, where 3600 arcseconds equal one degree. This contrasts with radial velocity, which is the time rate of change in...
when measured against the background of distant stars or galaxies.

By taking two exposures of the same section of the sky days or weeks apart it is possible to find objects such as asteroids, meteor
METEOR
METEOR is a metric for the evaluation of machine translation output. The metric is based on the harmonic mean of unigram precision and recall, with recall weighted higher than precision...
s, comet
Comet
A comet is an icy small Solar System body that, when close enough to the Sun, displays a visible coma and sometimes also a tail. These phenomena are both due to the effects of solar radiation and the solar wind upon the nucleus of the comet...
s, variable stars
Variable star
A star is classified as variable if its apparent magnitude as seen from Earth changes over time, whether the changes are due to variations in the star's actual luminosity, or to variations in the amount of the star's light that is blocked from reaching Earth...
, nova
Nova
A nova is a cataclysmic nuclear explosion in a star caused by the accretion of hydrogen on to the surface of a white dwarf star, which ignites and starts nuclear fusion in a runaway manner...
, and even unknown planet
Planet
A planet is a celestial body orbiting a star or stellar remnant that is massive enough to be rounded by its own gravity, is not massive enough to cause thermonuclear fusion, and has cleared its neighbouring region of planetesimals.The term planet is ancient, with ties to history, science,...
s. By comparing the pair of images, using a device such as a blink comparator
Blink comparator
A blink comparator was a viewing apparatus used by astronomers to find differences between two photographs of the night sky shot using optical telescopes such as astrographs. It permitted rapidly switching from viewing one photograph to viewing the other, "blinking" back and forth between the two...
, astronomers are able to find objects that moved or changed brightness between the two exposures or simply appear in one image only, as in the case of a nova or meteor. Sometimes objects can even be found in one exposure since a fast moving object will appear as a “line” in a long exposure.

One well known case of an astrograph used in a discovery is Clyde Tombaugh
Clyde Tombaugh
Clyde William Tombaugh was an American astronomer. Although he is best known for discovering the dwarf planet Pluto in 1930, the first object to be discovered in what would later be identified as the Kuiper Belt, Tombaugh also discovered many asteroids; he also called for serious scientific...
’s discovery of the dwarf planet
Dwarf planet
A dwarf planet, as defined by the International Astronomical Union , is a celestial body orbiting the Sun that is massive enough to be spherical as a result of its own gravity but has not cleared its neighboring region of planetesimals and is not a satellite...
Pluto
Pluto
Pluto, formal designation 134340 Pluto, is the second-most-massive known dwarf planet in the Solar System and the tenth-most-massive body observed directly orbiting the Sun...
in 1930. Tombaugh was given the job of hunting for a suspected “9th planet” which was achieved by systematically photographing the area of the sky around the ecliptic
Ecliptic
The ecliptic is the plane of the earth's orbit around the sun. In more accurate terms, it is the intersection of the celestial sphere with the ecliptic plane, which is the geometric plane containing the mean orbit of the Earth around the Sun...
. Tombaugh used Lowell Observatory
Lowell Observatory
Lowell Observatory is an astronomical observatory in Flagstaff, Arizona. Lowell Observatory was established in 1894, placing it among the oldest observatories in the United States, and was designated a National Historic Landmark in 1965....
's 13-inch (3 lens element), f/5.3 refractor astrograph which recorded images on 14x17 inch glass plates.