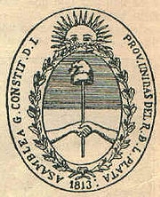 Encyclopedia
The Assembly of Year XIII was a meeting called by the Second Triumvirate
Second Triumvirate (Argentina)
The Second Triumvirate was the governing body of the United Provinces of the Río de la Plata that followed the First Triumvirate in 1812, shortly after the May Revolution, and lasted 2 years....
governing the young republic of the United Provinces of the Río de la Plata (today's Uruguay
Uruguay
Uruguay ,officially the Oriental Republic of Uruguay,sometimes the Eastern Republic of Uruguay; ) is a country in the southeastern part of South America. It is home to some 3.5 million people, of whom 1.8 million live in the capital Montevideo and its metropolitan area...
, part of Argentina
Argentina
Argentina , officially the Argentine Republic , is the second largest country in South America by land area, after Brazil. It is constituted as a federation of 23 provinces and an autonomous city, Buenos Aires...
and Bolivia
Bolivia
Bolivia officially known as Plurinational State of Bolivia , is a landlocked country in central South America. It is the poorest country in South America...
) on October 1812.

One of the objectives of the assembly was to define an institutional government system for the republic. Without the presence of representatives from some of the provinces
Provinces of Argentina
Argentina is subdivided into twenty-three provinces and one autonomous city...
, it was inaugurated on January 31, 1813 (whence the name). At the same time, it was to proclaim independence from Spain
Spain
Spain , officially the Kingdom of Spain languages]] under the European Charter for Regional or Minority Languages. In each of these, Spain's official name is as follows:;;;;;;), is a country and member state of the European Union located in southwestern Europe on the Iberian Peninsula...
, and redact the first constitution
Constitution of Argentina
The constitution of Argentina is one of the primary sources of existing law in Argentina. Its first version was written in 1853 by a Constitutional Assembly gathered in Santa Fe, and the doctrinal basis was taken in part from the United States Constitution...
of the young state.

During the assembly, different interests delayed the declaration of independence
Argentine Declaration of Independence
What today is commonly referred as the Independence of Argentina was declared on July 9, 1816 by the Congress of Tucumán. In reality, the congressmen that were assembled in Tucumán declared the independence of the United Provinces of South America, which is still today one of the legal names of the...
, but a number of common points were successfully established: