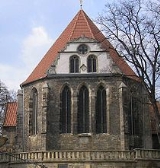 Encyclopedia
Arnstadt is a town in Ilm-Kreis
Ilm-Kreis
Ilm-Kreis is a district in Thuringia, Germany. It is bounded by the city of Erfurt, the districts of Weimarer Land, Saalfeld-Rudolstadt and Hildburghausen, the city of Suhl, and the districts of Schmalkalden-Meiningen and Gotha...
, Thuringia
Thuringia
The Free State of Thuringia is a state of Germany, located in the central part of the country.It has an area of and 2.29 million inhabitants, making it the sixth smallest by area and the fifth smallest by population of Germany's sixteen states....
, Germany
Germany
Germany , officially the Federal Republic of Germany , is a federal parliamentary republic in Europe. The country consists of 16 states while the capital and largest city is Berlin. Germany covers an area of 357,021 km2 and has a largely temperate seasonal climate...
, situated on the Gera River. It is one of the oldest towns in Thuringia and is nicknamed Das Tor zum Thüringer Wald, The Gate to the Thuringian Forest
Thuringian Forest
The Thuringian Forest running northwest to southeast, forms a continuous stretch of ancient rounded mountains posing ample difficulties in transit routing save through a few navigable passes in the southern reaches of the German state of Thuringia. It is about long and wide...
.

Modern Arnstadt has a population of approximately 25,000. It is a manufacturing center with glassworks and foundries, a solar panel production plant as well as glove-manufacturing and wood-finishing businesses. Manganese is one of the ores mined in the vicinity.

The town hosts an annual high jump
High jump
The high jump is a track and field athletics event in which competitors must jump over a horizontal bar placed at measured heights without the aid of certain devices in its modern most practiced format; auxiliary weights and mounds have been used for assistance; rules have changed over the years....
meet – Hochsprung mit Musik
Hochsprung mit Musik
The Hochsprung mit Musik is an annual indoor high jump meeting which takes place in February in Arnstadt, Germany. First held in 1977, the meeting began as a competition between mainly East German athletes...
– which attracts some of the world's foremost high jumpers. Kajsa Bergqvist
Kajsa Bergqvist
Kajsa Margareta Bergqvist is a Swedish former high jumper. She won one bronze medal in the Olympic Games, one gold and two bronze medals in the World Championships in Athletics and one gold and one bronze in the European Championships. Her personal outdoor record of 2.06 m, set in Germany in 2003,...
set a world record in Arnstadt's Sporthalle am Jahn-sportpark in 2006.

Arnstadt has a beautifully kept Old City, restricted to pedestrian traffic. Some of its noteworthy buildings include the 13th-century Church of Our Lady and an 18th-century palace.

Dubí
Dubí
Dubí is a town in the Ústí nad Labem Region, in the Czech Republic, near Teplice in the Ore Mountains, with 7,792 residents. It is an important transit point to Germany on European route E55, and the border crossing Cínovec is located within the town limits. There is a spa with mineral waters and...
, Czech Republic
Czech Republic
The Czech Republic is a landlocked country in Central Europe. The country is bordered by Poland to the northeast, Slovakia to the east, Austria to the south, and Germany to the west and northwest....
Gurk
Gurk (town)
Gurk is an Austrian market town and former episcopal see in the District of Sankt Veit an der Glan, Carinthia.thumb|left|180px|Gurk Cathedral.- Location :...
, Austria
Austria
Austria , officially the Republic of Austria , is a landlocked country of roughly 8.4 million people in Central Europe. It is bordered by the Czech Republic and Germany to the north, Slovakia and Hungary to the east, Slovenia and Italy to the south, and Switzerland and Liechtenstein to the...
Kassel
Kassel
Kassel is a town located on the Fulda River in northern Hesse, Germany. It is the administrative seat of the Kassel Regierungsbezirk and the Kreis of the same name and has approximately 195,000 inhabitants.- History :...
, Germany
Germany
Germany , officially the Federal Republic of Germany , is a federal parliamentary republic in Europe. The country consists of 16 states while the capital and largest city is Berlin. Germany covers an area of 357,021 km2 and has a largely temperate seasonal climate...
Le Bouscat
Le Bouscat
Le Bouscat is a commune in the Gironde department in Aquitaine in southwestern France.It is a suburb of the city of Bordeaux and is adjacent to it on the north side.-Population:-External links:*...
, France
France
The French Republic , The French Republic , The French Republic , (commonly known as France , is a unitary semi-presidential republic in Western Europe with several overseas territories and islands located on other continents and in the Indian, Pacific, and Atlantic oceans. Metropolitan France...
The source of this article is wikipedia, the free encyclopedia.  The text of this article is licensed under the GFDL.