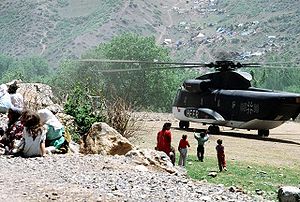 Army Aviation refers to aviation
Military aviation
Military aviation is the use of aircraft and other flying machines for the purposes of conducting or enabling warfare, including national airlift capacity to provide logistical supply to forces stationed in a theater or along a front. Air power includes the national means of conducting such...
-related units of a nation's army
Army
An army An army An army (from Latin arma "arms, weapons" via Old French armée, "armed" (feminine), in the broadest sense, is the land-based military of a nation or state. It may also include other branches of the military such as the air force via means of aviation corps...
, often described as an air corps. These units are generally separate from a nation's dedicated air force
Air force
An air force, also known in some countries as an air army, is in the broadest sense, the national military organization that primarily conducts aerial warfare. More specifically, it is the branch of a nation's armed services that is responsible for aerial warfare as distinct from an army, navy or...
, and usually comprise helicopters
Military helicopter
A military helicopter is a helicopter that is either specifically built or converted for use by military forces. A military helicopter's mission is a function of its design or conversion...
and light support fixed-wing aircraft
Fixed-wing aircraft
A fixed-wing aircraft is an aircraft capable of flight using wings that generate lift due to the vehicle's forward airspeed. Fixed-wing aircraft are distinct from rotary-wing aircraft in which wings rotate about a fixed mast and ornithopters in which lift is generated by flapping wings.A powered...
.

The tasks of each army's aviation units are defined slightly different, depending on nationality. Some general characteristics, however, apply to all army aviation units regardless of provenience:

In order to fulfill their manifold tasks, army aviation mostly uses helicopters. These helicopters can be classified into the following types: