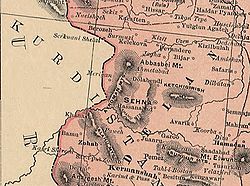 Ardalan or (1169-1867) was the name of a vassaldom in north-western Persia (Iran
Iran
Iran , officially the Islamic Republic of Iran , is a country in Southern and Western Asia. The name "Iran" has been in use natively since the Sassanian era and came into use internationally in 1935, before which the country was known to the Western world as Persia...
) during Qajar period.

Ardalan vassaldom was established in an area encompassing present day Iranian province of Kurdistan
Kurdistan Province
Kurdistan Province or Kordestan Province or Kurdestan Province is one of the 31 provinces of Iran, not to be confused with the greater geographical area of Iranian Kurdistan. The province of Kurdistan is 28,817 km² in area which encompasses just one-fourth of the Kurdish inhabited areas of Iran or...
from medieval period up to mid 19th century. Ardalan is also the name of the ruling family of that vassaldom. Their center was in the city of Sanandaj
Sanandaj
Sanandaj , also Romanized as Senneh and Sinneh) is a city in and the capital of Kurdistan Province, Iran. At the 2006 census, its population was 311,446, in 81,380 families....
(or Sanandaj or Senna). Ardalan was mainly composed of the Kurdish
Kurdish people
The Kurdish people, or Kurds , are an Iranian people native to the Middle East, mostly inhabiting a region known as Kurdistan, which includes adjacent parts of Iran, Iraq, Syria, and Turkey...
tribe of Ardalan of present day north-western Iran
Iran
Iran , officially the Islamic Republic of Iran , is a country in Southern and Western Asia. The name "Iran" has been in use natively since the Sassanian era and came into use internationally in 1935, before which the country was known to the Western world as Persia...
, now dispersed in and around the city of Sanandaj. The ruling family of this tribe claimed descent from Medes
Medes
The MedesThe Medes...
.

Because the official religion of Ardalan principality was Yarsan (Kakayi or Ahl-e Haqq
Ahl-e Haqq
The Ahl-e Haqq or Yârsân , are members of a religion founded by Sultan Sahak in the late 14th century in western Iran. The total number of members is estimated at around 1,000,000, primarily found in western Iran and Iraq, mostly ethnic Kurds and Laks, though there are also smaller groups of Luri,...
, or 'People of the Spirit'), and because this religion was tied to the Gorani
Gorani
Gorani may refer to:In culture:* Gorani people, a Balkan ethnic groupIn geography:* Gorani, a village in Uda Commune, Argeş County, Romania* Gorani, a village in Odăile Commune, Buzău County, Romania...
(Hewrami) dialect, it came to be used for poetry, next to Persian, in Ardalan principality.

Via the Yarsan religious teachings, the Gorani language was spread intensively, especially among the poor segments of the population. ln addition, many of the intellectual Kurds living outside the Gorani dialect territories adopted next to Persian, also Gorani for their poetry. The most famous poets of the Yarsan down through the centuries wrote solely in Gorani language. These include Baba Yadegar(born in Sharazour in the eighth century), Yal-Bagi Jaff (1493-1554), and Khan Almas Khani Kandoolei (1662-1728).
Many other famous Kurdish-Muslim poets have, down the centuries, written in Gorani, such as Mala Pareshani Dinawari (still living in 1398/99). He was a Shiite Muslim who was much opposed to the Yarsan beliefs and the Dervishes. Other poets such as Saidi Hawrami (1784-1842), and Mala Abdul-Rahimi Mawlawi Tavgozi (1806-1882) are also worthy of mention.

The blossoming of literature in the Ardalan principality was accompanied by an intense cultivation of music. Music is an essential element of the cultural tradition of the Yarsan religious community. In connection with this, it is interesting that the Kurds in East and South Kurdistan, where to the Gorani culture was spread, call songs 'Gorani'.